3 Things to Watch vs. Jets 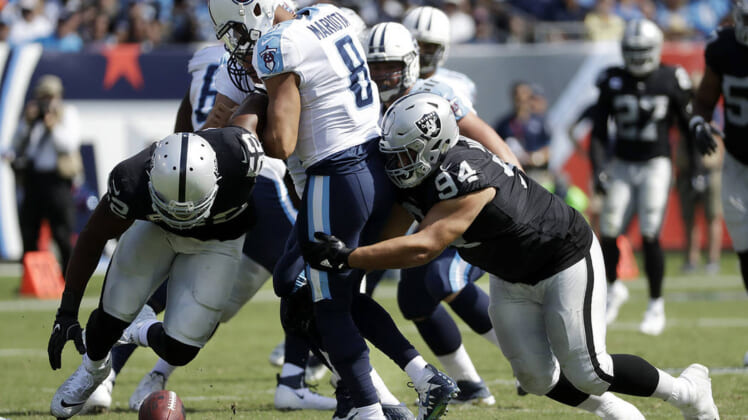 The Jets are in the midst of a rebuild of their entire roster. Can they really give the Raiders a game at home? Here’s what to watch for.

The Raiders return home to Oakland this week for their home opener against the sputtering New York Jets franchise. As fellow staffer Kirk Kern said so well: we might learn more about the Raiders from how the play against a bad team than the did against the up-and-coming Titans last week.

Nonetheless, there are a few things we’ll be watching for when the Silver and Black kick it off at the Coliseum this week.

It’s not that Marshawn Lynch didn’t get a nice load of carries against the Titans – to the contrary. For a player who had spent time away from the game, he looked damn good. Not only that, but his dominance at the line of scrimmage against the improved Titans defense was spectacular. Still, Lynch’s value includes his ability to leak out from the backfield as an outlet receiver. It’s well known Beast Mode desires to be a part of the passing game in addition to the captain of the ground attack. Last week, those receptions didn’t materialize and Derek Carr use his wideouts and tight ends more. They did just fine with that strategy, but you have to wonder if Todd Downing opens up the play book a little more and throws the ball Lynch’s director more often.

#2 – Does the Defense Continue its Growth

There’s no doubt that last week’s performance in Nashville was a big boost for the maligned Raiders defense. Everyone from NFL analysts to Raider Nation itself, had doubts. Sure, it was the Titans and not the Packers but great progress was made. Khalil Mack will continue to be Khalil Mack. Can that front continued to stuff the run and open the pass rush? Eddie Vanderdoes continues to show he will be a Pro Bowl caliber player and the young linebacking corps of Marquel Lee and Nicholas Morrow had flashes of brilliance last week. As you all know, the NFL is about consistency. If this defense can put together another stellar performance, maybe more believers will step out from behind the curtain and believe.

Here’s where coaching is worth its weight in gold. Can coach Jack Del Rio and his staff keep this team focused on beating a lesser opponent like the Jets? Will this young team have a let down after a successful week in Dixie? That will be the $1 Million question. Let downs happen in the NFL – especially amongst young teams. The Raiders staff has to keep this team up, ready, and hungry even against and anemic New York squad. This is the kind of game where you want to win – and win convincingly. It’s not as easy as it may sound but the Raiders have the weapons to make this a three quarter game. If they don’t, and the team struggles, naysayers will say “We told you so.” Still, I don’t believe it will happen. Remember as I said before: coffee is for closers.

This is one of those games where we may learn everything we need to know about this early season Raiders squad. Is it ready for high gear and in mid-season form? Or will its youth and inexperience on defense show?

That’s what Sunday’s are for – to find out.