3 Things to Watch: Raiders vs. Colts 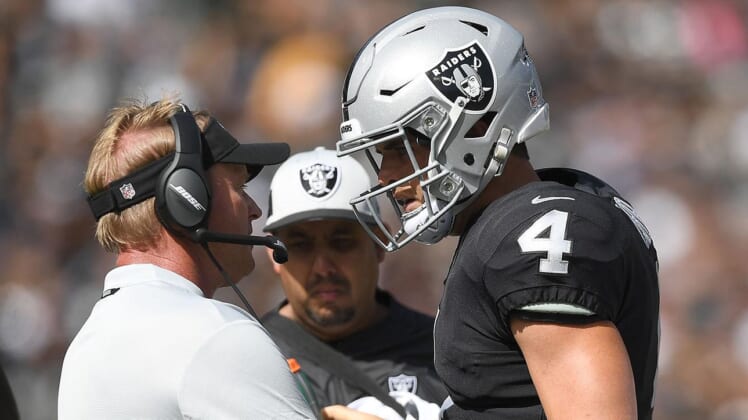 The Raiders look to bounce back from two straight losses as they head to Indy to take on a banged-up Colts squad.

It was a week of gnashing of teeth in Raider Nation as fans stewed after a lethargic outing last week in Minnesota which resulted in the silver and black dropping their second-straight game. Still, all is not lost after just three games.

The Raiders – win or lose – need to have a good outing in Indianapolis against a good team reeling from injuries to key players on both sides of the ball.

Here are my three things to watch on Sunday as the Colts and Raiders face off at 10am PT:

There are strong feelings on both sides of what I call the Carr Wars: those that love the affable quarterback and consider him the Raiders franchise signal-caller, and those who think he doesn’t have the ability to guide the team to wins consistently.

Carr was a monster in Week 1 against a pretty good Broncos defense but seems to have regressed as he’s faced more pressure. After looking confident and focused in Week 1, Carr, the past two weeks, looks more uncomfortable in the pocket and is dumping the ball off quickly. That kills the ability for the team to develop longer pass plays down the field.

Carr has just seven passes in the air over 20 yards and has only attempted 15 passes over 10 yards the entire season.

In fact, Carr and the Raiders have not been able to go downfield much at all so far in 2019. Carr has just seven passes in the air over 20 yards and has only attempted 15 passes over 10 yards the entire season.

The Raiders are suffering due to their inability to get downfield. As former NFL general manager Michael Lombardi pointed out in his weekly column: The Raiders are 5-14 under Jon Gruden and in three of those five wins, the team has executed 10 plays of over 25 yards.

There’s no question Carr has all the ability he needs to put up big numbers and win. He’ll face a depleted Colts defense on the road, so his opportunity to pull the road upset is there.

After showing great promise in Weeks 1 and 2, the young defense stumbled on the road against the Vikings. Rolling into Indy, the Raiders are facing challenges on several fronts that will, once again, test this young and thin defense.

After surrendering 217 yards in rushing against the Vikings, the unit must now face another one of the league’s top young running backs in Indianapolis’ Marlon Mack. Throw in the Raiders current injuries at linebacker, and the Colts stocked tight end roster, and it could be another long day.

Much will hinge on the Raiders defensive front and their ability to pressure Colts quarterback Jacoby Brissett. After notching five sacks in the first two games, the Raiders failed to pressure Vikings quarterback Kirk Cousins last week and must not repeat that performance again.

Look for rookie Clelin Ferrell and veterans Josh Mauro and Jonathan Hankins to bounce back against the Colts.

Getting Jacobs Back on Track

Establishing the running game early and often will be key to the Raiders having a shot in this game. Rookie running back Josh Jacobs was not 100-percent last week and carried the ball just 10 times in the loss to the Vikings. Look for Jacobs to get back to his Week 1 form when he carried the ball 23 times for 85 yards and two touchdowns.

This week, Gruden also noted the need to involve Jacobs more in the passing game as well. With a heavier load carrying the ball, and possibly more targets in the passing game, Jacobs should have a big day in Indianapolis if all goes according to plan. The Raiders released veteran wide receiver Ryan Grant this week and still haven’t found the right rotation of receivers behind WR1 Tyrell Williams and break-out tight end Darren Waller. They may find their answer in using their talented running back as a receiver too.

Spend your pregame Sunday with Silver and Black Today – Las Vegas’ ONLY all-Raiders sports talk show – 8-10am on CBS Sports Radio 1140 and streaming everywhere on the RADIO.COM app.