3 Takeaways from Raiders win over Seahawks 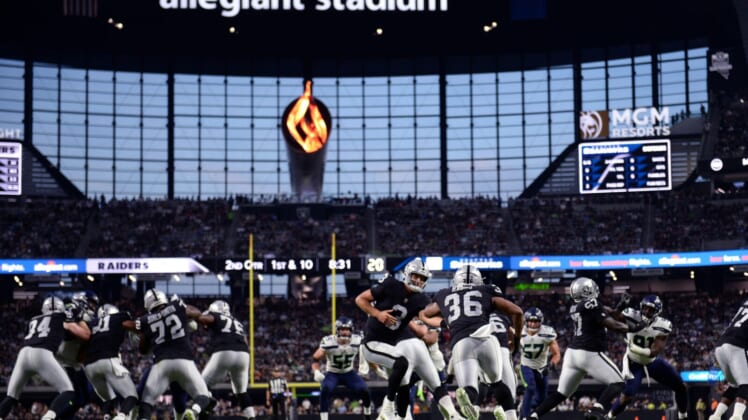 While Las Vegas Raiders fans won’t get too excited over one preseason win over the Seattle Seahawks, Raider Nation got to look at an improved squad who began to answer some lingering questions Saturday night in their 20-7 win.

With an offense that performed well last season, all eyes early on were on the defense under new defensive coordinator Gus Bradley. Could his new mix of young talent and experienced veterans show fans something in just the first week of the preseason? The answer was a resounding yes.

Despite the focus on the defense – and rightfully so – the offense also had something to show out of the gate. With a new offensive line starting on one side during the game, fans waited to see what first-round draft pick Alex Leatherwood would bring to the Raiders rebuilt offensive line. Add in a new center with Andre James, and developing players like John Simpson and Brandon Parker, there was plenty to watch for in this first practice tilt.

Here are three key takeaways from last night’s Raiders performance in front of a rabid crowd at Allegiant Stadium in Las Vegas:

The defense is a whole different animal

We’ve known and discussed Bradley’s overall style and desire to have a faster and aggressive style of play than his predecessor Paul Guenther. Saturday night proved all of that right. Because Bradley’s system doesn’t ask too much of an individual player and utilizes players’ style to accentuate their talent, we saw an exciting display against Seattle. It’s too early to declare defense fixed but clearly, Bradley and the Raiders are on the right track.

Not only that, but we saw a hearty contribution by three players fighting for a roster spot that brought smiles to old-school Raider Nation fans.

Defensive tackle Darius Philon, cornerback Nate Hobbs, and linebacker/safety Javin White all made the most of the extended playing time. All three showed a desire to swarm to the ball, attack the quarterback, and bring the new style of play and intensity Raider fans have come to expect.

While Philon’s stats won’t jump off that page, he was a constant disruptive force upfront for Las Vegas the entire game. His motor ran hot all night and it freed up other players to pressure the Seattle quarterback and disrupt the Seahawks offensive pace.

Hobbs, the rookie cornerback out of Illinois, recorded his first sack and his intensity was on display with every snap. We had heard coaches talking him up but it clearly shows Hobbs can play and isn’t just a training camp hype candidate.

The new offensive line showed up

Offensive line starters Kolton Miller, Richie Incognito, and Denzelle Good didn’t play on Saturday, but rookie Alex Leatherwood did and shined. During his time protecting Nate Peterman, Leatherwood looked good, stood his ground and showed why Las Vegas drafted him high in the first round.

At the center position, shoo-in starter Andre James was also impressive. Not only did he snap the ball cleanly and clearly lead the offensive line in the huddle, but he also played well, protected his quarterback and showed why Raiders brass was willing to talk away from Pro Bowler Rodney Hudson during the offseason.

Even Brandon Parker had a good night showing why offensive line coach Tom Cable and head coach Jon Gruden still rave about the third-year player. Either way, you have to be very satisfied with how the new pieces fit and played overall in their first true test.

Yes, it was a preseason game. It’s a glorified scrimmage of backups and guys fighting for a roster spot. Still, the Raiders have to feel good about the overall play in all facets of the game. They got better play overall out of their defense and it created disruption all over the field against a very vanilla Seahawks team. The Raiders were a new team with a new scheme that focuses on the roster talent and it was evident. Still, there are more questions to answer as we march toward the regular season.

On offense, pleasant surprises like running back Trey Ragas stood out and the play of the offensive line – and even Peterman – is a good sign for a team that needs to build depth for a playoff run in 2021 and beyond. While starters like Derek Carr, Josh Jacobs, Henry Ruggs III, and Darren Waller didn’t play, the Raiders depth on offense looks to be better in a year where the impact of COVID-19 still is unknown.

It was a positive night overall and the Raiders and their coaching staff can use it as a big building block to help their young players build confidence and their veterans to get comfortable.