It looks like former Saint Peter’s head coach Shaheen Holloway isn’t the only linchpin that will be leaving the New Jersey program following the team’s Cinderella run in the NCAA tournament.

On Tuesday, ESPN was the first to report the news that Junior guards Doug Edert, Daryl Banks III, and Matthew Lee will all enter the NCAA men’s basketball draft portal, with the goal of playing elsewhere for the final year of their college athletic eligibility.

The three stars from the 2022 Saint Peter’s squad that entered the NCAA tournament as a 15 seed, and made history to reach the elite eight, are following their one-time coach Shaheen Holloway out of the program. Last week, the New York native made the move that many expected, as he signed on to become the head coach of his alma mater Seton Hall for the next six seasons.

The mass exodus of three elite talents will likely put a nail in the coffin for any hopes that Peacocks fans had of an immediate return to the tournament in 2023.

Los Angeles native Banks III was the team’s top scorer during the season, averaging 11.3 points per game. He also chipped in 2.6 rebounds and 1.4 assists in 34 games. Lee started in 25 games in 2021-2022. Averaging 6.8 PPG, 1.8 REB, and 2.9 AST. However, it was Edert who became one of the darlings of the tournament and the most recognizable face to mainstream sports fans. 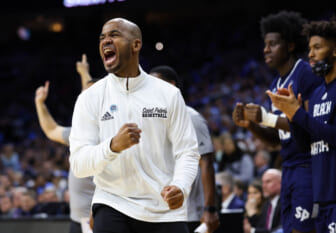 The bench star came to life at just the right time in the Peacocks season when he scored 20 points in the MAAC tournament to help St. Peter’s land their spot in March Madness. He then followed that up with another 20 in the biggest stunner of the tourney when the team booted basketball powerhouse Kentucky in the opening round. Edert averaged 14.3 PPG in his three tournament appearances.

Saint Peter’s defeated Kentucky, Murray State, and Purdue before losing to eventual finalist North Carolina. It is unclear if the three players will transfer to Seton Hall to play under Holloway or switch to a different school in the region.