3 Raiders takeaways from 17-15 loss to Washington 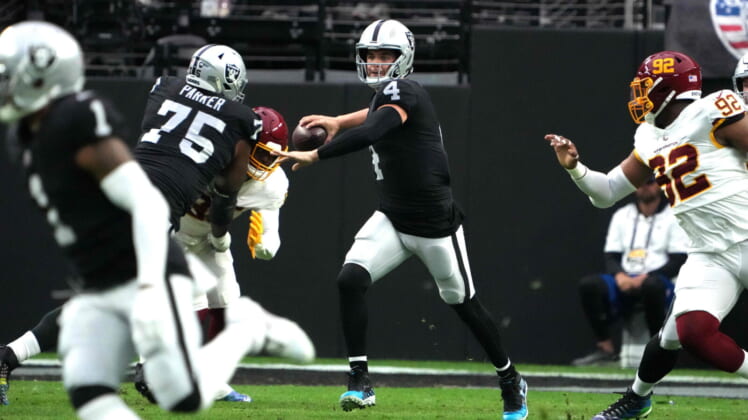 Another subpar offensive game plagued the Las Vegas Raiders (6-6) as they drop a critical game at home to the Washington Football Team (6-6), 17-15.

The Raiders continue to be their own worst enemy weighed down by an offense that can’t convert on third down and continues to not challenge defenses consistently. Quarterback Derek Carr threw for a pedestrian 249 yards going 28-of-38 without a throwing touchdown. It’s the sixth time in 2021 that Carr failed to pass for 300 yards — Las Vegas has lost each game that’s happened.

When it comes to defense, the Raiders are slipping backward there too. Although the Las Vegas defense kept the Silver and Black in this game until the end, the season-long inconsistency on offense is wearing on the banged up and undermanned unit. The Raiders are giving up the fifth-most points per game (28.6) in the NFL — that’s a half-point more than the one-win Detroit Lions surrender per game.

The Raiders loss at home to Washington makes reaching the 2021 playoffs a long-shot at best. Here are 3 key takeaways from the disappointing loss at Allegiant Stadium.

The Raiders offense is broken and mostly to blame for woes

Doesn’t matter if it’s the offensive coordinator Greg Oslon, quarterback Derek Carr, or anyone else, the Raiders offense is consistently inconsistent. After starting off the season looking like it had finally reached some consistency, the Raiders continue to look rudderless and uncertain while they have the ball. Carr’s performances go back and forth between brilliant and passable and the team’s inability to convert on third down and in the red zone is never-ending. The Raiders were just 2-of-8 on third down against Washington who ranks dead-last in the NFL at stopping 3rd downs. While the Raiders have weapons, and were without their top gun in tight end Darren Waller, they can’t seem to find an identity offensively. There seems to be no specific blueprint to how they want to go about winning games.

The defense held their own

The Raiders defense has been going backward in many ways the past five games but not against Washington. In the modern NFL, if you give up just 17 points you should win the game. The Las Vegas defense gave up 11.5 points less than their average and the team still lost. They held Washington to under 300 yards in total offense despite losing Cory Littleton who was injured early in the game and Gus Bradley’s unit still fought and gave the offense plenty of opportunities to get the ball and score. The Raiders just couldn’t do it. There’s no question the multiple misses in the NFL draft are hurting the unit talent wise but they do give Carr and the offense ample opportunities that are mostly squandered. Maxx Crosby continues his Pro Bowl-caliber season and Nate Hobbs continues to impress. This defensive squad is just wearing down and it could get ugly for them if the offensive ineptitude continues.

The Raiders are not a playoff team

Despite the fast 5-2 start, and the team holding off a complete second-half collapse like 2019 and 2020, this team is nowhere near a playoff caliber club. Had they followed up the big Thanksgiving win over Dallas with another knocked-out performance, then they’d honestly still be in the mix. But this team is going through ups and downs that seem to be eating away at it core identity which has been lost with its coach, young promising wide receiver among other challenges. When the Raiders have won over the past six weeks, it’s been despite their problems and holes. That doesn’t last very long in an NFL season that now stretches 17 games. Owner Mark Davis has lots of decisions to make and the way the team is going now, expect new leadership at every level of the football operation. Yes, there’s still five games left. That’s ample time to evaluate some talent and see who is worthy of returning next season.