3 Raiders takeaways from 32-13 loss to Bengals 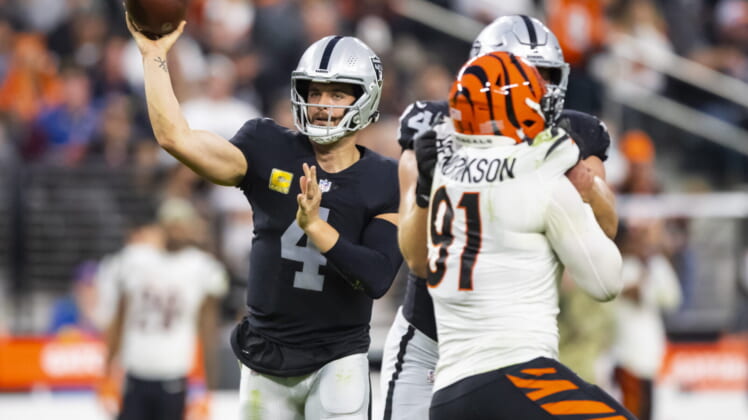 Unfortunately for Raider Nation, this feels all too familiar.

For the fourth season in a row, the Las Vegas Raiders started out the season with a winning record only to hit the November skid as they lose their third game in a row in embarrassing fashion 32-13 to the Cincinnati Bengals in front of a thin Allegiant Stadium crowd.

The Raiders’ offense, and quarterback Derek Carr, continue to be unable to score or move the ball effectively and consistently compounding the team’s current struggles. After scoring 30-plus points in Weeks 7 and 8, the Raiders have now scored 16, 14, and 13 points during their losing streak. That’s an average of 3.5 points per quarter over the past three games.

“We came out flat, it was terrible,” Carr said after the game. “There’s no beatin’ around it…we’re just a little out of sync right now and no one’s coming to save us.”

Here are 3 key takeaways from the Raiders brutal loss in front of their home crowd in Las Vegas.

Raiders takeaways No. 1: The offense is killing this team

While the Raiders’ defense has its problems, the current three-game losing streak is percisicely because the offense cannot consistenly score or move the ball effectively. Greg Olson’s playcalling is deplorable and in situational football he and the offense continue to fail the test over and over again. The Radiers couldn’t convert a third down to save their life (1-of-7 on the day) and were 1-of-3 in the red zone. It would be different if progress was apparent but it’s not and the Las Vegas offense is beyond broken. They did get Darren Waller more involved (7 rec, 116 yards) but it wasn’t enough.

Raiders takeaways No. 2: Derek Carr is part of the problem

While Derek Carr haters will be quick to get all giggly with that headline, it’s not what you think. I’ve never been a Derek Carr hater and have defended him as a good quarterback who can win with the right pieces around him. On this Raiders team, Carr has the talent around him and still is not winning. He deserves credit for his off-the-field leadership during the turmoil in the organization, but he doesn’t get paid to be a nice guy and do press conferences. If you’re not willing to accept this one of my Raiders takeaways, then you’re just in denial.

If you’re an elite quarterback in the NFL, you have to lead your team out of funks and perform at your best. Far too often Carr follows his team leads and plays to the level of the Raiders vs. taking them on his shoulders. That’s not to say he’s completely to blame — because he’s not — but if there was a prop bet around him being in a Raiders uniform in 2022, I’d bet against it. He deserves another opportunity to win in an organization and the Raiders need to think about the future.

Raiders takeaways No. 3: The Raiders’ coaching staff isn’t getting it done post Gruden

While you may argue the Raiders coaching staff wasn’t getting it done with Jon Gruden, the fact is the staff isn’t doing a good job of motivating and preparing this team to play and that’s one of my key Raiders takeaways after this latest loss.. While Rich Bisaccia, Gus Bradley and a few others are doing their best, this team lacks the leadership it needs to keep the team focused and on track for a playoff push. Clearly there’s a leadership vaccuum and while the Raiders players might like their coaches, they don’t respond to them with their play. You can find individual players who are giving it their all, but it’s a team game and this team isn’t cohesive. More sloppy penalties against the Bengals created points and opportunities all becuase the Raiders aren’t a disciplined team. Mark Davis will need to make a change and make it as soon as the season is over.

There are no excuses for the Raiders to be where they are at with a 5-5 record. The loss of Gruden and Henry Ruggs is not an excuse. Several NFL teams have had to deal with adversity yet they find ways to win games. Excuses are piling up and professional football is about winning, not whining.