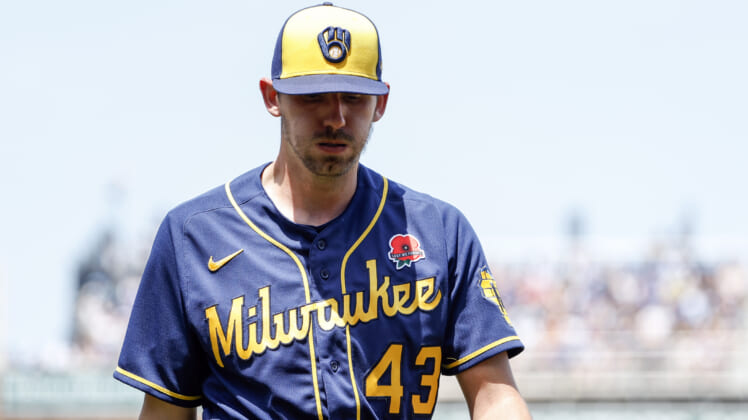 The Milwaukee Brewers have been the subjects of trade rumors for months. Of course, if the Brewers are going to be serious buyers at the trade deadline (August 2), they will have to give up some prospects in order to complete the trades that they want.

However, this does not mean that all of their prospects should be considered tradable assets. In fact, there are several players the Brewers would be better off holding onto, regardless of what other players are offered in return.

Jackson Chourio is an untouchable for Brewers

There are prospects to get excited about, and then there is Jackson Chourio. So far this season, Chourio is hitting .327/.377/.602 with 12 home runs and 48 RBI. Additionally, he has 24 doubles, five triples, and 10 stolen bases.

Chourio was recently promoted from the Brewers’ Low-A team, the Carolina Mudcats, to their High-A club, the Wisconsin Timber Rattlers. He played his first game for the Rattlers on Tuesday night. Evidently, he did not miss a beat after his promotion:

Not only is Jackson Chourio the Brewers’ top prospect, but he is also the 36th-ranked best in all of baseball. There are currently no star players that the Brewers could trade for that would give them the kind of long-term success that Chourio will. Juan Soto, of course, is the big name on the trading block.

However, he is just under club control for two and half seasons. Any trade package the Brewers could offer Washington would have to include Chourio. This is something that they simply can not do. Soto will not sign long-term with the Brewers while Chourio could very well give them six-plus years of production once he reaches the Majors.

Sal Frelick is a big part of Milwaukee Brewers 2024 plans

The Milwaukee Brewers already DFA’d outfielder (Lorenzo Cain) and Andrew McCutchen is playing on a one-year deal. Christian Yelich is cemented in the outfield for the long-term and he also spends plenty of games as the team’s DH. Hunter Renfroe was acquired before the lockout and has hit four home runs in the Brewers’ last five games after the All-Star break.

However, Renfroe just has one more season of club control left before hitting free agency in 2024. In other words, the Brewers need MLB ready outfielders to be available soon.

Enter Sal Frelick, the team’s first-round pick in 2021. This season, Frelick is hitting .317/.386/.477 between High-A Wisconsin and Double-A Biloxi. Frelick has also hit seven home runs, four triples, and 16 doubles while driving in 32 runs and stealing 13 bases. He has been on a tear as of late, mashing three home runs in his last five games. 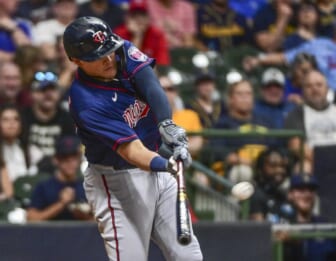 Of course, if the Brewers want to add a quality bat for a post-season run this season, they will need to part with prospects. However, they should avoid adding Frelick to any trade package due to their need for him to be ready to take a roster spot in 2024.

Ethan Small made his second career Major League start on Tuesday night. He only lasted 3.2 innings while giving up three runs on three hits and four walks. He also notched four strikeouts. In two starts with the Brewers this season, Small is 0-0 with a 7.11 ERA, 2.53 WHIP, eight walks, and seven strikeouts.

Small has been much better at Triple-A Nashville, though. He is currently 6-4 with a 3.34 ERA, 1.24 WHIP, 81 strikeouts, and 40 walks. There is still polishing that needs to be done, as he acknowledged in his postgame interview on Tuesday.

Earlier this week, the Brewers announced that they had reached a five-year contract with left-handed starter Aaron Ashby. Like Small, Ashby was roughed up in his first two starts with the Brewers in 2021. However, after moving to the bullpen late last season, he was able to work on some fine-tuning and has emerged as a quality starter. In his first start since signing the contract, Ashby pitched seven innings, allowed just two runs, and struck out nine. The lesson: allow prospects time to develop.

The fact of the matter is that the Brewers will be facing a changing of the guard in their rotation in a couple of years. While Ashby and Freddy Peralta have signed long-term deals, two-time All-Star Brandon Woodruff has not. Neither has reigning NL Cy Young Award winner Corbin Burnes. While the Brewers may be able to afford one of them, the likelihood of them signing both is farfetched. It is, therefore, vital that they have quality starting pitchers like Ethan Small waiting in the wings.