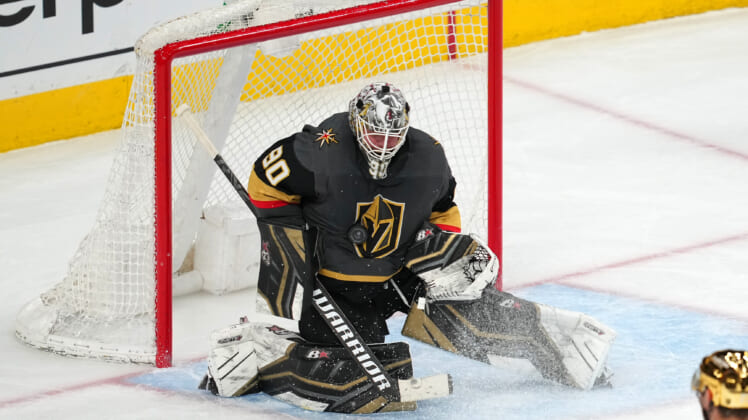 Last offseason, the Vegas Golden Knights decided to part ways with fan-favorite Marc-Andre Fleury. This was a controversial decision in the desert as Fleury had been with the team since the expansion draft and developed a close relationship with the fanbase. However, his $7 million cap hit was too much for the Golden Knights to swallow so they traded him to the Chicago Blackhawks.

This left the Golden Knights with Robin Lehner as the starter last season. Lehner has had a journeyman career — playing for five different franchises — and had to fill a big pair of shoes that Fleury left behind.

Lehner had a solid, if unspectacular, season that was unfortunately marred with injuries. He managed to appear in 44 games, sharing duties with Logan Thompson and Laurent Brossoit. While the trio was far from terrible, they didn’t provide the standard of goaltending that the Golden Knights were used to with Fleury.

Entering next season, the Golden Knights are ready to be Stanley Cup Contenders. The extra rest resulting from the team’s playoff miss may be just what the doctor ordered after an injury-plagued season. In addition, adding Jack Eichel for all 82 games means the arrival of one of the NHL’s most talented players.

The first option available to the Golden Knights is doing nothing and rolling with Lehner next season. While he’s not coming off his best season, the Golden Knights were leaky defensively and had to use a patchwork blue line as defenders continued to go down with injuries.

The arrival of new coach Bruce Cassidy should also help the team defensively. While behind the bench in Boston, Cassidy’s teams did a good job at suppressing dangerous chances. This could be a factor that leads to a bounce-back year for Lehner.

However, Lehner is also going to cost $5 million against the cap. That’s pricey for a goalie that doesn’t steal that many games. If the Golden Knights wanted to allocate that money somewhere else, they could go with a different option.

The St. Louis Blues have to make a decision about their future. Jordan Binnington helped them win a Stanley Cup and was widely considered to be one of the game’s brightest young goaltenders, but this season another player emerged in their organization. Ville Husso had a great season, winning 25 games and performing well above average.

The Blues have already committed $36 million to Binnington and thus could let Husso depart this offseason. Joel Hofer is another goaltender with a bright future in the organization. All this means that Husso, an unrestricted free agent this offseason, will likely be playing for a new team at the start of the 2022-23 NHL season.

Husso didn’t have a great postseason and thus that may scare some teams away. However, he was up against the mighty Colorado Avalanche and it was a small sample size. If the Golden Knights get rid of Lehner, Husso could be a suitable free-agent target, though his salary would likely result in minimal savings.

The New York Rangers are another team with a crowded goalie situation that the Golden Knights could take advantage of. Igor Shesterkin’s evolution into a Hart Trophy winner has left Alexandar Georgiev, a promising young goalie, on the outside looking in.

The Russian goaltender is coming off a weak season, posting a career-low save percentage. However, he’s still just 26 years old and has shown lots of promise. He’s currently a restricted free agent, but the Golden Knights could likely lure him away from the Rangers organization for a reasonable price.

Georgiev would be a cheaper option that would allow the Golden Knights to allocate some cap space away from the crease to another position group. Rolling with him and Thompson as a duo would be risky, but if the Golden Knights placed their trust in the two young goaltenders, they could be rewarded with a solid platoon for a cheap price.