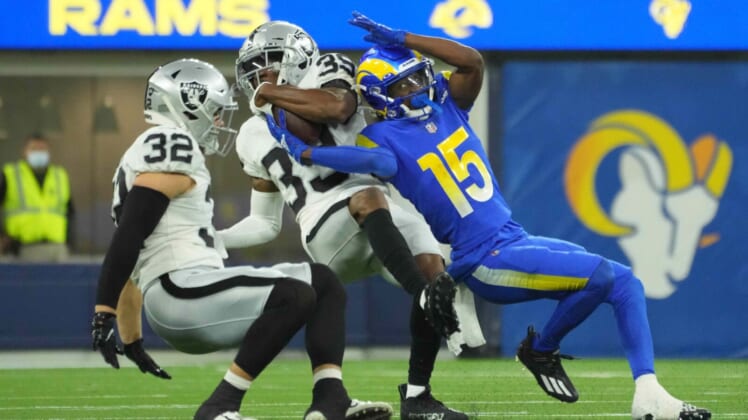 Nate Hobbs is the real deal

Sure, it’s only practice games but with the talk that emerged out of training camp, coupled with the rookie’s performance in the two preseason games, the Raiders may have struck gold with Nate Hobbs.

The former Illinois standout has electrified the Raiders young backfield and looks to be a shoo-in for the starting role at slot cornerback and more. With his versatility and speed, head coach Jon Gruden and defensive coordinator Gus Bradley can move Hobbs around making him even more valuable. With former higher-round picks like Damon Arnette and Trayvon Mullen looking for improvement this season, Hobbs may push some of the younger vets. That’s a good thing for the Raider defense who ranked near last in the NFL in passing defense in 2020.

“If you watch it carefully, he played nickel to start the game and did excellent there,” Gruden said. “Then we moved him outside. We have some corners hurt. Damon Arnette couldn’t go tonight, Keisean Nixon went out early, so he went outside and played very well and made some impact plays.”

Hobbs star is ascending and it couldn’t come at a better time for him or his team.

There’s no other way to say it: the Raiders second-line offensive line struggled most of the night. Players like Patrick Omameh, Brandon Parker, Nick Martin, and Jeremiah Poutasi all pretty much got owned against the Rams. First-round draft pick Alex Leatherwood had his moments and, overall, played well despite some blown assignments. Still, depth on the offensive line is huge as starting left guard Richie Incognito is hurt once again.

Incognito, now nearly 39 years old, has all the want and desire but his body might finally be failing him. That creates a big question mark for the already remade Raiders offensive line which will need depth. That depth could be in question even before they get to Week 1 vs. Baltimore.

The injury bug has arrived in Las Vegas

What looked like a position with some depth – finally – for the Raiders, the linebacker room suddenly has become worrisome due to injury. The Incognito injury on offense, and even Marcus Mariota’s status, mean offense hasn’t been unscathed either.

What’s of most concern are the injuries to linebackers Nicholas Morrow (a projected starter) and second-year player Javin White both are projected to have injuries meaning a loss of significant availability. The loss of a player like Morrow, and White, who was having an exceptional camp and preseason, means the Raiders find themselves woefully thin at linebacker. That will put more pressure on second-year linebacker/safety Tanner Muse to step up and they’ll also need Cory Littleton to have an almost Pro Bowl-like season if they are to overcome them.

On offense, Gruden said backup QB Marcus Mariota wasn’t ready to go physically against the Rams. Mariota, who has a long history of injury issues, is expected to be ready for the team’s preseason finale against the 49ers this week. Whatever ails Darren Waller seems to have passed but running back Jalen Richard is out indefinitely with a foot injury. His loss seems to have been negated by the emergence of rookie RB Trey Ragas who again impressed the coaching staff in the Rams win.

The coming roster cuts and injury status updates should shed more light on just how ready the Las Vegas Raiders will be when the season kicks off against the Ravens on a national stage on Monday Night Football.