The MLB regular season is just a couple of weeks away and most rosters are set, as they rev up to start playing in games that count. However, there are still several free agents available that could be of use to ball clubs in need of a boost in certain areas. One such talent on that open market is veteran outfielder Tommy Pham.

The 34-year-old is looking for a new home following two disappointing and injury-plagued seasons in San Diego for the Padres. While he seems to be on the downside of his career, he is still projected to deliver 14 home runs, 49 runs batted in, and 14 stolen bases in 2022 (via Baseball-Reference). Making him a player that could be an excellent fourth outfielder and designated hitter for teams expecting to contend for a playoff spot.

With that in mind, here are three organizations that would be perfect landing spots for the eight-year veteran.

The Chicago White Sox had a big year in 2021. Finishing in first place in the AL Central and making the playoffs. They also have a solid group of 20-something talents in the outfield with Eloy Jimenez, Gavin Sheets, and the high upside in Luis Roberts. However, in Pham, the team could have a solid safety net if any of those men have a slide back in progression.

The Sox finished with the eleventh least HRs in the league last season. Pham wouldn’t cure those ills alone, but as a backup option that has pop, he certainly helps. In three of his eight years seasons, the Las Vegas native has smacked 20 or more HRs in seasons for the St. Louis Cardinals, and Tampa Bay Rays. Plus, he is a respected veteran to add to a locker room trying to develop a consistent winning culture.

While the New York Mets are built to have one of the better pitching staffs in baseball in 2022, there are still some weaknesses when it comes to their everyday lineup and outfield. While they added Starling Marte and Mark Canha in the offseason, adding Pham may be a necessity.

Marte is the star talent in the outfield, however, he has had issues in the past with injuries. While Canha has not proven in seven years he can be a reliable and key factor as an everyday player. Plus, the team was one of the worst in HRs last season and has not made any major additions to address that problem. 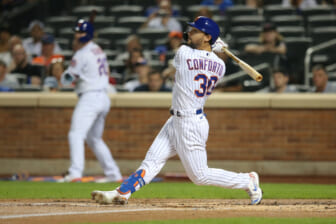 With Michael Conforto still on the free-agent market and no indications he will return to the Mets, Pham would be a smart pick-up for New York to give them more options in the outfield and power pinch hitters off the bench.

Pham returns to Florida for a Tampa Bay Rays reunion

After finishing in first place in the AL East in 2021, the Rays return with a strong outfield core led by last year’s AL Rookie of the year Randy Arozarena and Manuel Margot. However, that doesn’t mean they couldn’t use more depth in the outfield. Since Pham has succeeded there and is likely to come at an affordable price, he would make a great fourth OF and designated hitter option as the team makes another playoff push in 2022.