MLB spring training is underway but there are still a few notable free agents available that could boost a team’s roster before the season starts on April 7. One of the most prominent players left on the open market is talented New York Mets outfielder Michael Conforto.

The seven-year veteran just turned 29 this month and is hitting the prime years of his athletic career. However, 2021 was a disappointing year for Conforto after a hamstring injury cost him a chunk of time and he finished with career lows in batting average, home runs, and runs batted in for a season where he played in more than 120 games.

Yet, despite the regression last season Conforto still could land a nine-figure deal from a team in need of the power he can bring to their lineup. With that in mind, here are 3 ideal landing spots for Michael Conforto with just a couple of weeks left before the start of the 2022 season.

Despite the Mets having a history of signing or trading for other teams stars, Conforto is one of the few homegrown quality everyday players they have developed in some time. He was the team’s top pick in the 2014 draft and grew into one of the core talents on the roster.

Considering the team has the highest payroll in the league, and reports state the team boss Steve Cohen is willing to spend even more and get closer to the “Cohen Threshold” for the right players, a return to Citi Field is very possible. While the team added a name in Starling Marte via free agency, an everyday outfield featuring Marte, Brandon Nimmo, and Mark Canha is nothing to write home about. Especially in the HR and RBI departments. 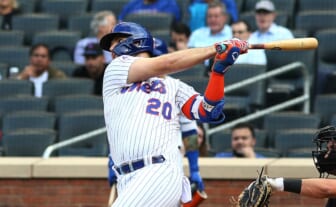 With the addition of Max Scherzer, there will be big expectations for the Mets, and bringing Conforto back to improve the offense may be a necessity at this point. Plus, they may end up getting him on a better deal than originally expected, since he hasn’t found the big contract he likely figured would be thrown at him in free agency.

The New York Yankees signing Conforto is an idea that’s been rumored and suggested in New York for several years. He is the sort of player the franchise has made a reputation of going after for decades. A power-hitting lefty, just hitting their prime, and who can park home runs in Yankee Stadium’s short porch in right field.

However, beyond traditional free agent habits and the opportunity to stick it to home city rivals the Mets, the Yanks could actually use Conforto. Giancarlo Stanton at this point has become the team’s everyday DH. Is the team willing to go into the season with an outfield of Aaron Judge, Aaron Hicks, and Joey Gallo? It seems unlikely for a franchise always looking to stockpile power in their batting order.

Conforto checks off a lot of boxes for the Yankees, especially when it comes to handling the New York City media spotlight.

While the Cleveland Guardians, formerly the Cleveland Indians, have never been a team that makes big splashes in the free-agent market, this may be the time to do so. Since trading Francisco Lindor to the Mets the team has lacked thump in their lineup. Conforto would be a perfect fit and could become the new face of the franchise if he were to finally reach the potential he has shown for years.

In 2019, and during the pandemic shortened 2020 season, Conforto displayed the heights of his capabilities. Hitting 33 HRs and smashing 92 RBIs three years ago, and then batted a career-high .322 in 54 games two years ago. The one-time All-Star would be a new building block for a team transition and lacks major threats in the lineup and outfield.

With the market for his services not overflowing with interest, the Guardians may also be able to get a long-term talent for a price much more to their liking than they would have thought a month ago.