Green Bay Packers head coach Matt LaFleur couldn’t help but admit today that the team is lacking the in-house answers to fill some of their massive wide receiver holes.

The Packers will have a whole bunch of receiving yards to make up in 2022. New Las Vegas Raider Davante Adams is a superstar talent and there is a reason he is now the highest-paid wideout in the game. His 1,553 yards, 123 catches, and 11 touchdowns are awe-inspiring numbers and close to what two solid WR could rack up in the league combined.

However, not only did they trade away Adams earlier this month, but the Packers also lost their third-best receiver in 2021, Marques Valdes-Scantling, to the Kansas City Chiefs in free agency. It’s bad enough losing an All-Pro talent, but the Packers now have to fill two of the top three spots in their receiving corp. The state of the team’s pass-catchers group is as weak as it’s been in years, and coach Matt LaFleur admitted as much on Tuesday during his press conference at the annual league meetings when he said the offense has a big “legit guy” hole to fill.

“If you look at our roster right now, we definitely need to get some speed in that room,” LaFleur said. “We need a legit guy that can take off the top of the coverage. We lost a guy that was pretty good at doing that. It’s like putting a puzzle together. You’ve got to find those pieces that you’re missing and put it all together.”

Related: Who are the top NFL free agents left on the open market?

With many of the best free-agent options off the board, Green Bay doesn’t have a ton of choices to make up for what they have lost offensively over the last week. However, that doesn’t mean there aren’t strong options available. Here are three wide receivers that could be a big help in addressing LaFleur’s needs for 2022.

Jarvis Landry being available this off-season was a bit surprising since he isn’t that far removed from three straight Pro Bowl appearances and is only 29. However, when the Cleveland Browns traded for Dallas Cowboys WR Amari Cooper, Landry became expendable.

In terms of pure talent, he may be the best option still left on the market. The former Dolphin is the one player that is a lock to jump into the offense and contribute by having last season’s MVP Aaron Rodgers tossing him the ball. However, reports claim he is looking for a $20 million per year deal. With only $15 million in cap space, the Packers are not going to pay anywhere near that.

Also Read:
Tyler Lockett to the Green Bay Packers, how a trade might look

However, if Landry finally has a “come to Jesus” moment and realizes he will need to take a prove-it contract so he can build his brand for the next offseason, there is no better option than Rodgers and the Packers offense.

Ohio State star wide receiver Garrett Wilson is universally viewed as the best pass catcher in the draft. His 70 catches, 1,058 yards, and 12 TDs for the Buckeyes in 2021 solidified his place as one of the elite talents in this year’s class. However, not only is he a gifted receiver but he is one of the fastest players in the 2022 draft. At the NFL combines in February, in clocked in as the seventh quickets player at an impressive 4.38 40-yard time. 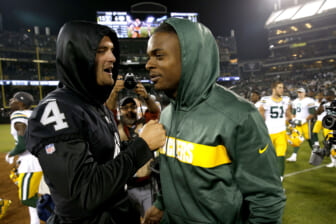 If La Fleur is looking for a player that could come in and take the top off the coverage, Garret is as good an option as any. He is currently projected to go at No. 8 to the Atlanta Falcons in our mock draft. The Packers don’t pick until 22. However, they have two picks in the first, second, fourth, and seventh rounds. They should be bold and package a few of those to get a player that has the potential to eventually fill Adams’ shoes, and for far cheaper.

Yes, Desean Jackson is not the player he was when he was a Pro Bowler nearly a decade ago. Yes, he is 35 and didn’t look great splitting time for the Los Angeles Rams and Las Vegas Raiders in 2021. However, over the last decade, there is no player that has been better at stretching out a secondary with pure speed.

While Jackson can be frustrating at times and never truly reached his potential, if LaFleur is looking to plug specific holes, and feels he needs a speedster, Jackson can still do that even at his age. Like power punching for an old boxer, uncanny speed is a characteristic that often sticks around longer than other gifts.

Not to mention, after making just a million dollars in 2021, Jackson is the best low-risk signing since he will be a bargain bin special in terms of cost. 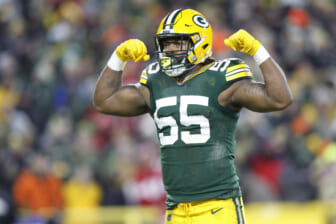