3 Bold Raiders Predictions for 2020 and Why They Matter 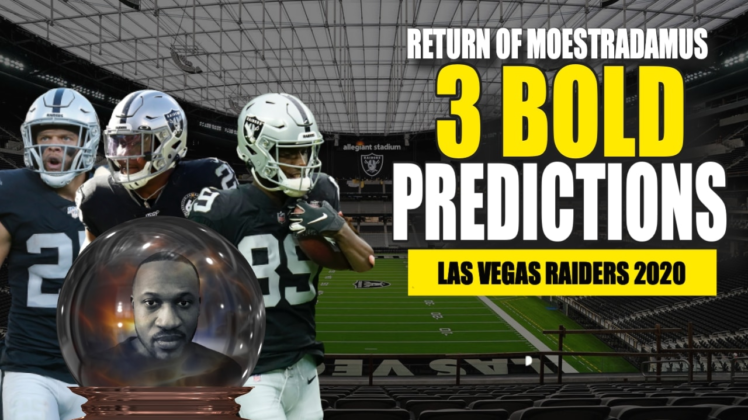 As the fall rolls around, our own internal prognosticator and seer of the future – Moestradamus – appears from a foggy alley in New York City to share his Raiders predictions for 2020.

Before we shift our focus to the Carolina Panthers, why not think outside the box for some bold predictions? No one knows what the future holds, but every season comes with surprises and Moestradamus has some ideas of what might happen in the first season in Las Vegas. As I peer into my silver and black crystal ball, here are three bold Raiders predictions for 2020.

We’ll focus on individual player performances and statistical projections in our glimpse into the future. We’ll ask the questions: will running back Josh Jacobs elevate his game to the next level? If so, how impressive can he look in his sophomore NFL campaign?

The Raiders selected Henry Ruggs III before Bryan Edwards, but that doesn’t mean the former will finish with more receiving yards than the latter.

The defense must force more turnovers. Although Trayvon Mullen heads into the season as the No. 1 cornerback, will someone else lead the team in interceptions?

Provide your sizzling hot takes—you never know what may come to fruition over the next four months. So, as I close my eyes, take a deep breath in, and summon visions of the football future, here are my fearless Raiders predictions for 2020.

The Raiders open the season with two rookie wide receivers in starting roles. Despite all the buzz for Ruggs and Edwards, Derek Carr has to develop a solid trust in them during live action. Head coach Jon Gruden must find out what works best for his new weapons, which may take some time, especially without OTAs or a preseason.

Gruden knows what he has in the backfield with Josh Jacobs. In fact, he wants to convince everyone else that the Raiders have a special running back, per The Athletic’s Vic Tafur:

“Here’s the story,” Tafur wrote. “I heard that Gruden was so mad last year that Jacobs didn’t win offensive rookie of the year (the third-best rookie, Kyler Murray, did because he is a quarterback) that he vowed that Jacobs would get more carries and more receptions to prove what a crime the voters had committed.”

With Gruden’s push to showcase Jacobs and the inexperience at key wide receiver positions, expect the Raiders to lean on a run-heavy offense early in the season unless Zay Jones and Nelson Agholor take on major roles to balance the attack. While that Raiders prediction for 2020 might seem like a no brainer, it’s key to this offense clicking and clicking early.

Secondly, Devontae Booker has rushed for fewer than 300 yards in each of his last three seasons. He’s been a more effective pass-catcher, logging 105 receptions for 872 yards and a touchdown through 61 contests.

Jacobs may not reach his goal of at least 60 catches because of Booker and Jalen Richard, but if he’s healthy for a 16-game slate, the elusive ball-carrier could rack up 1,500-plus yards on the ground as the workhorse tailback.

Other than Rico Gafford, Carr hasn’t played with a speedy threat like Ruggs. Of course, the latter has more upside and route-running discipline, but we cannot assume Carr will quickly adjust to his sharp cuts and quick breaks.

During a media presser, Carr spoke fondly of Edwards and even compared him to a former teammate at Fresno State.

“Bryan is a very violent route runner and that’s a good thing,” Carr said. “Then when the ball is in the air, he reminds me of Davante. Someone where there’s just a trust. I could throw it up one-on-one and those 50/50 balls are 98/2 for us.”

Carr isn’t just saying nice things about Edwards because he feels obligated to do so. He’s shown a certain comfort with bigger targets and possession-type receivers.

Between Amari Cooper and Michael Crabtree, the former had some instances where he’d explode for 120-plus-yards, but he also had duds and disappeared in some games. The latter had a little more trust in crucial situations. Crabtree led the team in touchdowns (25) between the 2015 and 2017 terms.

This year, Carr will have a variety of weapons. Ruggs’ speed will possibly draw safety coverage over top, which potentially leaves one-on-one situations for Edwards on the perimeter. If he consistently wins those battles, the South Carolina product could establish himself as the go-to target.

The Raiders released Damarious Randall before final cuts, which put Erik Harris in a position to open the season as the starter.

Fans had mixed reactions to the move and the vote of confidence in Harris to start a full season. He’s the prototypical Gruden Grinder-type player who worked his way up from a special teams ace to a starter. He’s 30 years old with only 18 career starts, so you can see why the Raiders’ decision to release Randall raised some eyebrows.

According to Tafur, Randall just didn’t fit with the club. Harris has improved every year at safety. Since 2018, he actually leads the team in interceptions (five). Now, in a full-time starting role, the veteran defender could take advantage of more time on the field. The Raiders need someone on the back end to force turnovers.

The coaching staff expects Johnathan Abram to develop into a leader, but he still needs on-field experience in live games. Harris has earned his stripes. The team named him one of six captains Monday.

Harris could see a handful of quarterbacks susceptible to turnovers this season.

In Week 14, the Indianapolis Colts travel to Vegas. Harris will line up across from Philip Rivers, whom he picked off twice last year.

Furthermore, the Raiders may see rookie quarterbacks Justin Herbert and Tua Tagovailoa if the Los Angeles Chargers and Miami Dolphins fall out of the playoff picture down the stretch. Drew Lock has only started in five games. He’s prone to mistakes. New York Jets signal-caller Sam Darnold has thrown 28 interceptions in two seasons. Cleveland Browns quarterback Baker Mayfield has been intercepted 35 times since 2018—the second-most leaguewide.

Harris isn’t going to deliver big hits that make you jump off your couch or run a 4.4-second 40-yarder. Yet, he’s a savvy veteran who finds the football. With multiple turnover-prone quarterbacks on the schedule, don’t sleep on the Gruden Grinder at safety.