After three seasons with the Seattle Seahawks, Shaquem Griffin is generating interest from multiple teams on the free-agent market.

After three seasons with the Seattle Seahawks, Shaquem Griffin is generating interest from multiple teams on the free-agent market.

NFL Network’s Tom Pelissero reported on the buzz surrounding Griffin, who’s converting from linebacker to a pure pass-rusher and more of an edge defender:

Griffin wasn’t a great scheme fit as an off-ball linebacker in Seattle’s 4-3 base defense and played mostly special teams, but the 2018 fifth-round pick has the chance to pick his new team for 2021.

The 25-year-old had his left hand amputated at a young age, yet has still managed to be a factor in the NFL, and is a low-risk, low-cost and high-reward option among the free agents remaining.

After starring in college at UCF, maybe a change of scenery and position is what Griffin needs to realize his full potential in the pros. Let’s take a look at where he might land on the open market. 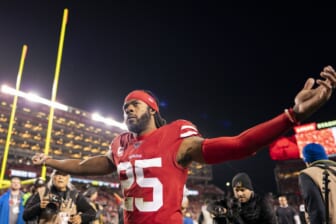 Although the reigning Super Bowl champions drafted Joe Tryon with the No. 32 overall pick to end Round 1 of the 2021 NFL Draft, he’s a more thickly-built 3-4 outside linebacker and is still very much a projection after opting out of last season.

This is the classic thunder and lightning pairing of the future if Griffin winds up in Tampa Bay. Going to a great situation under the tutelage of defensive coordinator Todd Bowles, Griffin would have tons of talent surrounding him on the Bucs’ front seven.

Remember that Griffin ran a 4.38-second 40-yard dash at the 2018 NFL Scouting Combine. That was a record for linebacker prospects, and even if he’s a pure speed rusher to start off, that adds a whole new wrinkle to Tampa Bay’s defense.

Inside linebacker Devin White has similar speed and managed to rack up a whopping nine sacks in 2020. His unique skill set, combined with Jason Pierre-Paul, Shaquil Barrett and whatever the Bucs could get out of Griffin and Tryon? That’s some serious depth and freakish athleticism right there.

Despite drafting Odafe Oweh (formerly Jayson Oweh) in the first round, Baltimore still has a need for depth out on the edge of its defense. Given its extremely successful track record of developing players at that spot, Griffin could hardly find a better spot to land.

Like Griffin, Oweh runs a sub-4.4-second 40, but is a lot bigger than Griffin at 6-foot-5 and 257 pounds. Not many men that large are built to move that quickly. Such is the case with Oweh.

Looking at the Ravens’ current depth chart, they have Pernell McPhee entering his age-33 season, a non-pass-rushing threat in Tyus Bowser and Patrick Queen, a 2020 first-round pick who was awful as a rookie save for when he rushed the passer, but he’s expected to still be an inside ‘backer.

That leaves a logical opening for Griffin to find a role, which would take some pressure off Oweh and provide some much-needed juice off the edge in Baltimore.

Having a three-time Defensive Player of the Year in Aaron Donald on the defensive line and an All-Pro cornerback in Jalen Ramsey can mask a lot of deficiencies on any defense. However, beyond Leonard Floyd, the Rams don’t have much depth many flat-out viable players to play on the edge.

At least taking a flier on Griffin would give Los Angeles a unique element its defense doesn’t currently have. Donald is always going to command double teams, Floyd is a legitimate playmaker, and Ramsey is going to lock down one side of the field, which already makes life difficult for opposing passing attacks.

Having someone with Griffin’s speed, lateral quickness and closing burst screaming in off the edge would just present another problem for offensive lines to deal with.

The Seahawks somewhat dubiously deployed Griffin given his skill set. Meanwhile, Jamal Adams came in for the 2020 campaign and thrived as a situational pass-rusher from his safety spot, further mitigating the need for Griffin’s services In Seattle.

There has to be at least some chip on Griffin’s shoulder about how things ended in the Emerald City, particularly after the Seahawks let his twin brother, Shaquill, walk to Jacksonville in free agency. Going to the NFC West rival Rams and thriving would be a captivating twist in Shaquem Griffin’s NFL journey, that’s for sure.