Just two years ago, Damon Harrison was considered one of the best run-stuffing defensive tackles in football. Despite his reputation as a dominant force on the interior, Harrison has continued to bounce from city to city ever since the New York Giants traded their former first-team All-Pro.

Although he’s drawn interest from some teams, the man known as “Snacks” is still searching for a place to play football in 2021.

With as much talent as Harrison has shown, several teams should be excited at the chance to add a player of his caliber. Here are the three that make the most sense. 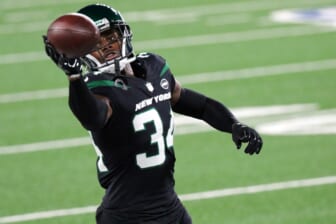 There’s no telling what’s happening with Eddie Goldman heading into the season. If the Chicago Bears have to go another season without their nose tackle, a low-cost replacement such as Damon Harrison could be a great match.

Searching for his fifth team since 2018, Snacks is likely just hungry for another chance. For Harrison, signing with the Bears allows him to go back to the NFC North division, wreaking havoc on two of his former teams in the Lions and Packers.

After being traded during the season in 2018, Snacks played in 17 games. Moving towns didn’t hurt his appetite, PFF gave him a 92 grade that year. In fact, from 2013-2018, Harrison graded at 90.1 or better in all seasons but one. So yeah, a bad season or two as he’s had to change schemes in three different cities should be taken with a grain of salt.

If I’m the Bears or any other team, signing Damon Harrison would be high on the list of priorities at this stage of the offseason. They don’t have much to lose.

If Damon ‘Snacks’ Harrison is waiting for a chance to sign with a playoff team, he should check out the Buffalo Bills. GM Brandon Beane has put together a strong team out East, but one area he’s tried to address has not worked out.

Since signing a five-year $50 million contract in 2018, Star Lotulelei has played in 32 out of a possible 48 regular-season games, compiling an average PFF grade of 57.9. That’s not good. Ed Oliver also hasn’t lived up to the hype as the ninth pick in the 2019 NFL Draft.

Snacks isn’t a guaranteed improvement over Lotulelei or Oliver given the stage he’s at in his career, but then again maybe he is. Harrison’s worst career PFF grade is 63.2, and Oliver was an awful 45.8 last year.

At the very least, Harrison would be much more cost-effective after playing last season on a veteran-minimum salary. For a team looking for that final piece, bringing in a run-stopping dynamo such as Snacks should definitely be considered.

In 2020, the Dallas Cowboys allowed 158.8 rushing yards per game, second-most in the NFL. Despite changing coordinators, the players executing the tasks on the front seven are largely the same outside of top draft pick Micah Parsons and free-agent signee Brent Urban.

Most will point to the linebackers not playing up to par, but the defensive tackles need to step their game up too. A couple of mid-round picks the Cowboys made can develop, but how much can they contribute right away? At 6’3, 350 lbs, Damon Harrison is what analysts like to call a space-eater, something the Cowboys roster currently lacks.

Maybe it’s wrong to suggest a player who spent multiple seasons tormenting Dallas Cowboys offensive linemen should team up with them. But if there’s anyone who can vouch for the strength of Snacks, it’s guys like Tyron Smith, Zack Martin, and La’el Collins, who had to face him twice a year.

Harrison had his best season, an All-Pro year in 2016 in the NFC East, who’s to say he doesn’t want to go up against some of the same foes as before? Snacks has expressed interest in signing with the Cowboys before, maybe it’s time for Jerry Jones to give him a call.