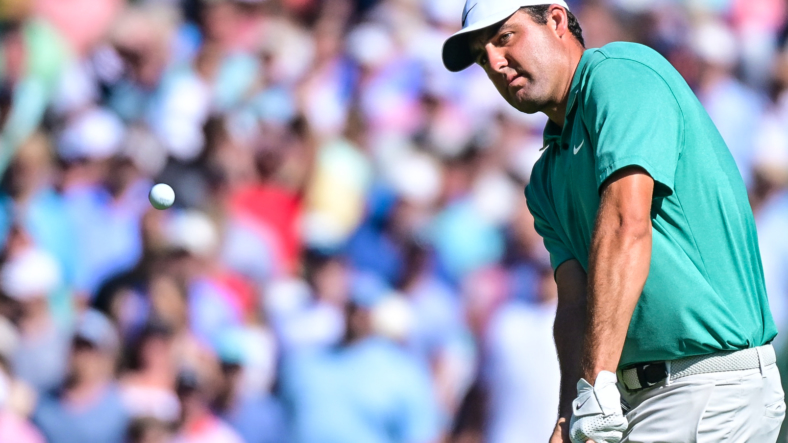 A lot of non-Olympic global sporting events are about to begin within the near future. In the NBA, some of its preseason games will be overseas in Japan and Abu Dhabi. Countries are gearing up for the 2022 World Cup slated to begin in November in Qatar. In addition, the World Baseball Classic begins in March.

In the world of golf, the 14th Presidents Cup will begin next week as the top golfers from the United States and the best players from the world, excluding Europe, face off.

The Presidents Cup, which is played every other year, was originally scheduled to take place last year but was pushed back due to the COVID-19 pandemic.

Last time the Presidents Cup was held in 2019, the Americans narrowly won 16-14 over the International Team in Melbourne, Australia.

This year’s event is taking place on American soil at Quail Hollow Golf Club, which hosted the 2017 PGA Championship and will host the same major tournament in a few years in 2025.

Both the global and the U.S. teams are composed of 12 players as play begins on Thursday.

Each team has a captain for the event. The International Team captain is Trevor Immelman, and the U.S. captain is Davis Love III.

Analyzing the U.S. roster for the Presidents Cup

The first six players of the United States team were automatically chosen based on their performance during the 2021-22 PGA Tour season.

In the Official World Golf Rankings, the six automatic qualifiers combined for a 7.6 ranking, including four that are inside the top seven.

From the last Presidents Cup in 2019, Thomas, Cantlay, Schauffele, and Finau are returning for this year’s event.

Although Quail Hollow is going to provide some difficulty, it doesn’t mean the players are not going to have experience with the yearly stop on the schedule. In addition, Thomas won the 2017 PGA Championship at Quail Hollow to claim his first major. During that tournament, Kisner finished in seventh place.

Spieth is making his return to the Presidents Cup after skipping the 2019 event. The 29-year-old played in the 2015 tournament that took place in South Korea and the 2017 event at Liberty National Golf Club in Jersey City, N.J.

Scheffler and Thomas each took home a major victory this past season, with the Texas Longhorn alum taking the Masters Tournament and the Alabama alum winning the PGA Championship in May.

Amongst the first-time Presidents Cup participants, Young and Homa each took multiple PGA Tour titles this past season as Homa is currently near the top of the leaderboard at the Fortinet Championship as a final tune-up before next week.

Now, this group is teaming up to try and retain the Presidents Cup for the ninth consecutive time and tenth in the past 11 events, dating back to 2000.

On Thursday, Friday, and Saturday of the Presidents Cup, match play ensues as two players from each team pair up and face off against the other team.

On Thursday, there will be five matches that will either be in a four-ball format or a foursomes format.

Four-ball format is when two players play best ball, which means both players on a team play together to make the lowest score. Both players hit their own ball, and the player who records the lowest score is the score for the hole.

The foursome golf format is when players play alternate shot from the tee to the hole.

If four-ball match play is used on Thursday, then the foursomes format will be in place on Friday.

On Saturday, there are eight matches total, split between both formats in the morning and the afternoon.

On the final day on Sunday, all 12 players from each will go head-to-head in singles match play.

With the formation of the United States team, thoughts on who will play with who start to begin.

The two pairings that seem to already be set in stone are the duos of Spieth and Thomas as well as Cantlay and Schauffele.

The 2019 Presidents Cup became the birthplace of the teaming of Cantlay and Schauffele as their relationship grew to winning on the PGA Tour together at the Zurich Classic of New Orleans last April.

During the Tour Championship a few weeks ago, the 2021 FedEx Cup Champion said he tries to get as many holes in with the 2020 Olympic Gold Medalist as many times, even if that means using practice rounds before a tournament begins early in the week.

In addition, World No. 1 Scheffler could be paired up with Burns, who are good friends like Cantlay and Schauffele, and got together with their wives following The 150th Open a couple months ago.

Other possible pairings could be Kisner and Homa, who played together at the QBE Shootout last December and finished fifth.

The two wild card pairings, who could pretty much play with anyone, are Finau and Morikawa.

Finau played with multiple players in both the Presidents Cup and the Ryder Cup over the last few years.