2022 PGA Championship: 3 keys for Tiger Woods to advance up the leaderboard 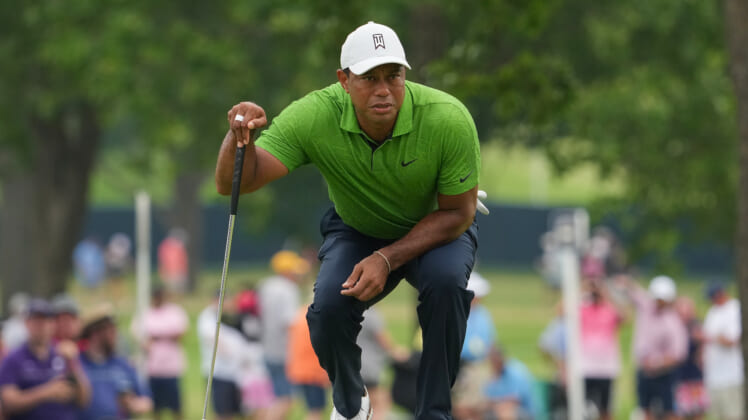 Two rounds are in the books at Southern Hills Country Club for the 2022 PGA Championship.

The biggest name in this week’s field hovered around the cutline for most of Friday but got birdies on the par-5 13th hole and the par-4 16th to get inside the plus-4 cut.

Tiger Woods, who carded a 1-under 69 second round to get down to 3-over, finished inside the cut to play Saturday and Sunday.

“Well, I knew what the number was and then I just needed to go out there and do it,” Woods said after his round to ESPN. “Started off the back nine exactly what I wanted to do. Made birdie at 10, then almost whip-hooked it on 11 and made double (bogey). Next thing you know, I’m outside the cutline.

So, I had to grind and go to work, and I did. Hopefully get a hot weekend with some tough conditions and you never know.”

Here are three things the 15-time major champ has to do on Saturday and Sunday to climb the leaderboard.

The key for this entire tournament so far has been how well players are able to hit fairways and get on the putting surface.

The grass levels play a big role in the next shot and being in the short grass – the fairway – rather than the rough or possibly being behind a tree could be the difference in making a birdie versus par on a hole.

Through 36 holes, Woods has done well in finding fairways as he has driven the ball into the short grass 75% of the time, which ranks tied for sixth in the field.

However, his greens in regulations rate so far is just 47.2%, which is near the bottom. That means that Woods is unable to find the green from the fairway on par-4s and par-5s.

As a result, the lack of finding greens has led to eight bogeys in this tournament for the four-time PGA Champion.

Related: Golfers with the most major victories

2. Tiger Woods needs to stay out of bunkers

Finding greens go hand in hand with staying out of greenside bunkers.

However, because Tiger Woods is still not 100% percent since getting injured in a car accident last year, walking in and out of bunkers puts an increased toll on Woods on top of walking the course.

For 13 of the 14 clubs Woods uses, including his wedge in the bunker, he doesn’t have the strength he used to have when it comes to loading up on his right leg.

As a result, Woods has to trust his experience in order to execute shots and shoot low.

“It’s a lot of things, but it’s just the way it is,” Woods said. “Over the course of my career, I’ve used my hands quite well and I’ve got to rely on feel and hit shots. When you’re out there, it’s about hitting the ball, the right number and getting it done and I know it wasn’t exactly the way I wanted it to be. It wasn’t pretty.”

3. Tiger Woods needs to continue to get ample rest

The goal for Woods as he was preparing for the PGA Championship was to go through his practices with quality, but in not as much time, so he can have more of a break to rest his body ahead of Thursday’s first round.

By making the cut and playing Saturday, Woods has to challenge himself to once again find success while being physically limited.

It’s not the first time Woods has played through injury at a major championship, as he won the 2008 U.S. Open at Torrey Pines in La Jolla, Calif. with an injured knee.

Woods said he needs to focus on making the best possible score on every hole and believe that he can get it going in his traditional red polo shirt on Sunday.

“The mission is to go ahead and win this thing somehow,” Woods said. “I know at sometimes it doesn’t exactly feel well, but hey, that’s just what it is. That’s life, that’s sports. Where we push it and sometimes it breaks. But that’s OK. You get back out there and that’s why I got a great PT staff. I’m really good at breaking things and they are really good at fixing things. So, it’s a great relationship.”

Woods tees off Saturday morning at 8:30 a.m. CST looking to make a move on in round three.