2021 Could Be Make or Break for Jon Gruden and Raiders 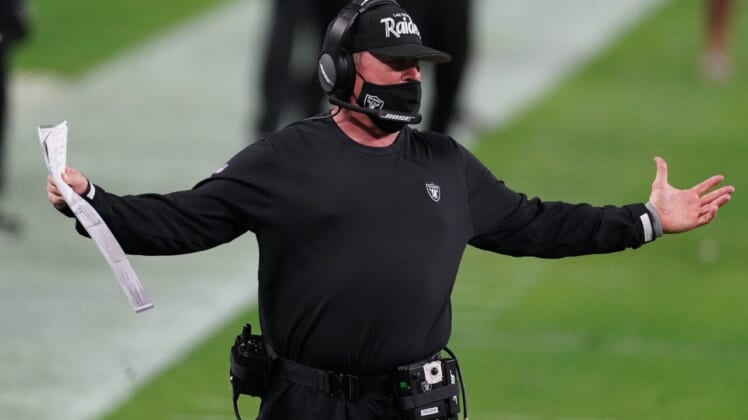 The trade today of Trent Brown ends another dismal return on investment for Jon Gruden and the Las Vegas Raiders in free agency that should have the coach on notice for 2021 even if he does have a 10-year contract.

As the Raiders say goodbye to another high-priced free agent that never lived up to his true potential consistently, I am reminded of a famous quote from the great General Colin Powell and how Jon Gruden could benefit from the former military leader’s advice.

Yet, without his pedigree and past, would he not be on a hot seat if he was anyone else after a third-straight year of missing the playoffs and missing badly on player acquisition?

Powell, the former 4-star general, diplomat, and politician, was a results-oriented performer who used his military training to articulate how you become a success.

“There are no secrets to success,” Powell famously said. “It is the result of preparation, hard work, and learning from failure.”

Learning from failure is a tough axiom for some leaders but if Jon Gruden wants to turn around his Las Vegas Raiders, it’s certainly time to look in the mirror and learn from the team’s player personnel failures under his leadership.

With Brown publicly sharing he wasn’t happy in Las Vegas despite his hefty contract, why is it that Gruden, and general manager Mike Mayock, are missing so often on the right players to turn one of the sports most beloved and hated franchises around?

Back in 2018 when Jon Gruden took over, in essence, all of the decision-making process as it relates to the football side of things, one of the first moves he made was the trading of All-Pro pass rusher Khalil Mack to the Chicago Bears. Although unpopular (for obvious reasons) at the time, the Raiders and Gruden received a nice bounty in return for Mack.

That return included Chicago’s first-round picks in 2019 and 2020, a Bears third-round pick in 2020, with the Raiders also shipping their own 2020 second-round pick, and a conditional 2020 fifth-round pick that turned into a seventh-round pick to the Bears.

Mack signed a new whopping $90 million deal in the Windy City while the Raiders used some of the money freed up by the Mack deal to sign some big-name free agents including Brown, wide receiver Tyrell Williams, and cornerback/safety LaMarcus Joyner. In fact, the Raiders and Jon Gruden spent $79.5 million in guarantees in 2019 to those three.

Looking back, what did they get?

The answer: not much.

Brown had his excellent Pro Bowl season in 2019 but could not stay on the field in 2020. The organization grew tired of his lack of ability and had a big out and traded him to New England.

Williams, who when he could play, played well in the silver and black. But due to nagging injuries (which were not a problem when he was with the Los Angeles Chargers), compiled just 42 receptions in two seasons. Williams was released and signed with the Detroit Lions a few weeks ago.

Joyner, perhaps the biggest of the busts, was played out of position at the slot cornerback position after playing well as a safety in previous stops. In his three seasons with the Raiders, he had zero interceptions, eight passes defended, zero quarterback hits, zero sacks, and nine tackles for a loss. All of that for $22 million over the course of 28 games for the Raiders. The caveat: while Joyner was rated by Pro Football Focus with a grade of 61.3 (2,667 Snaps) as a slot cornerback, as a safety, he earned a grade of 90.1 (1,419 Snaps). Clearly, Joyner was never used where he needed to be which lies on Gruden (and Guenther).

What’s more concerning that just the misses in free agency for Jon Gruden – where you can add last year’s misses in DE Carl Nassib ($16M), DT Maliek Collins ($5M), and Cory Littleton ($22M) – is also the performance of the large haul of draft capital Gruden and Mayock received in the Mack deal.

There’s no doubt young players take time to develop at the professional level. To call a first-year player a “bust” is unfair to me, in most cases. Looking at the Raiders’ draft classes from 2019 and 2020, I don’t think you can say there are any definite busts but for several, the clock is about strike midnight.

Clearly, the most successful draft pick made by Jon Gruden as a result of the draft capital obtained from Chicago in the Mack trade is running back Josh Jacobs. The gifted running back has rushed for over 2200 yards and scored 19 touchdowns in two seasons. He has been the bell cow for Jon Gruden’s post-trade draft capital. Although he is a patent star in the NFL, he has had some health issues due to a lack of consistent run blocking upfront and a viable backup to spell the young back.

Add in the Raiders trade of wide receiver Amari Cooper to the Dallas Cowboys for a 2020 first-rounder, and Jon Gruden and Mayock have had five first-round draft picks over the past two NFL Drafts. Jacobs sticks out but the rest are still very much a work in progress.

The full draft haul included Jacobs, Clelin Ferrell, and Johnathan Abram in 2019, and Henry Ruggs and Damon Arnette in 2020. All besides Jacobs are still looking to find their game and justify their draft position and help the Raiders get over the hump.

Ferrell progressed nicely in 2020 but needs to find his extra gear in 2021. Abram has the ability and raw talent and will benefit from Gus Bradley’s new system in Las Vegas, but needs to refine his game and stay on the field by staying healthy. Ruggs and Arnette struggled for different reasons – Arnette was injured three different times and Ruggs both was hampered by route running and a lack of targets in the Raiders offense.

The Raiders are now entering their fourth season under Jon Gruden and have not developed their talent enough to improve more than two wins year-over-year, and their hit and miss record in free agency has been awful.

That brings me to my point about Gruden. I don’t know a Raiders fan or even talking head that doesn’t want to see Jon Gruden succeed. Having him back in the NFL is good for the game and for the ethos that is the league.

Yet, without his pedigree and past, would he not be on a hot seat if he was anyone else after a third-straight year of missing the playoffs and missing badly on player acquisition?

That’s why 2021 was a pivotal year for the Las Vegas Raiders franchise and Jon Gruden. He must make significant progress which is hard to tell if possible at this moment. With the shedding of salary, the Raiders are freeing up money to address their needs which are numerous. Are they a team far away like the Houston Texans? No. But with Jon Gruden’s track record of free agent signings, and “the jury’s still out” draft grades over the past two seasons, it’s a huge unknown just how much better they can get.

While most are sure to bring up the fact Jon Gruden has a 10-year contract and doesn’t face a pink slip if 2021 yields results similar to 2019 or 2020, don’t bank on it. While the contract is for a decade, those familiar with the contract between the Raiders and Gruden said not all of that is guaranteed.

The NFL is a win now league. Jon Gruden has had ample time and the opportunity to turn the Raiders into a playoff team. He’s getting closer but it hasn’t happened yet. It must happen in 2021 or their could be consequences.

Let me rephrase that: there should be consequences.

That reminds me of another quote I came across the other day that Gruden may want to reflect on.

Let’s see how Jon Gruden, and Mike Mayock, changes (or doesn’t) their approach to building the Raiders.