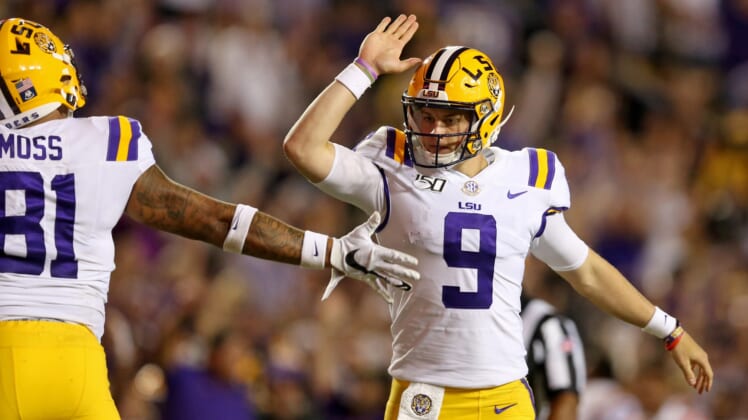 The 2020 NFL Scouting Combine is right around the corner, and with it will come a flood of information as stars dominate the headlines.

Looking ahead to the annual gathering, there are some prospects who will clearly take over as the center of attention due to either their absurd physical traits or the storylines that already surround them heading into the 2020 NFL Draft.

These are the players who will be talked about the most during the NFL Scouting Combine, which takes place from Feb. 23 through March 2.

Widely expected to be the No. 1 overall pick of the 2020 NFL Draft via the Cincinnati Bengals, Joe Burrow could show up for medicals and his interviews and call it good without taking any hit to his stock. Whether he does any of the drills, runs his 40 or throws for coaches and scouts matters not. This kid is going to be talked about from the start of the combine until it’s over, regardless.

But if Burrow does opt to compete, everything he does will be parsed and examined to the Nth degree. After pulling off one of the most legendary seasons in college football history, his stock can hardly go any higher. But if he shows out on the field and impresses during interviews, the buzz surrounding Burrow will grow even louder, and Bengals fans will grow even more desperate for their team to land him.

Speaking of hype, there hasn’t been a defender as hyped as Chase Young since Jadeveon Clowney came out of South Carolina in 2014. ESPN’s Todd McShay has already come out and declared that Young is better than both Joey Bosa and Nick Bosa, who was among the most dominant pass rushers this past season as a rookie for the San Francisco 49ers.

Just wait until Young — a physical marvel — hits the field and runs his 40 in shorts. Football fans everywhere are going to melt into a puddle of drool as they envision this young man spearheading their defense. Last season’s top sack master in college ball, despite missing two games due to suspension, Young has the kind of potential that can change a franchise.

In the NFL, speed is one of the most treasured commodities around. And if you have speed plus are an outstanding receiver on top of that, the sky is the limit for what you can accomplish. Just ask Kansas City Chiefs star Tyreek Hill.

Speaking of speed, Jerry Jeudy has it, and there are rumors he may just blow the hinges off the combine with his 40 time.

Jeudy is more than just a set of wheels, though. He’s a highly skilled receiver who can take any play the distance, whether it be a five-yard slant or a deep post. Last year, Jeudy led the talented Alabama receiving corps with 77 receptions, which he turned into 1,163 yards and 10 touchdowns.

One of the most intriguing defenders in the 2020 NFL Draft, Clemson linebacker Isaiah Simmons doesn’t fit any conventional mold. He’s 6-foot-4, roughly 230 pounds and boasts incredible length. He’s also a sideline-to-sideline defender who has the potential to become an All-Pro coverage linebacker/safety hybrid at the next level.

Based on what he was able to do on the field for the Tigers the past few years, we’re expecting Simmons to absolutely slay the combine. He’ll almost certainly be among the top linebackers in explosion drills like the vertical, and it would be stunning if he’s not among the top when it comes to raw speed. You’ll hear Simmons’ name a lot in the coming weeks.

There aren’t too many players in the NFL today who can do what Laviska Shenault is capable of doing for the right offense. A true “offensive weapon,” he is technically a receiver but Shenault can do serious damage as a runner and could be viewed as an upgrade to what Deebo Samuel was able to do as a rookie this past season for the San Francisco 49ers.

Set to compete at the combine after a determination was made that he will not need surgery for a groin injury, Shenault has the physical attributes to rank among the best of the best and boost his already-hot stock to new heights.

We already know that Tua Tagovailoa will not be cleared for football activities during the 2020 NFL Scouting Combine. Instead, the NFL community will be abuzz with the results of his medicals.

This past week, Tagovailoa got the best news possible during a checkup following surgery on his broken hip in November. He’s set to become one of the first players selected in the 2020 NFL Draft if that trend continues with a glowing report at the combine. Needless to say, everyone will be talking about Tagovailoa, regardless.