Biggest surprises from first round of the 2020 NFL Draft 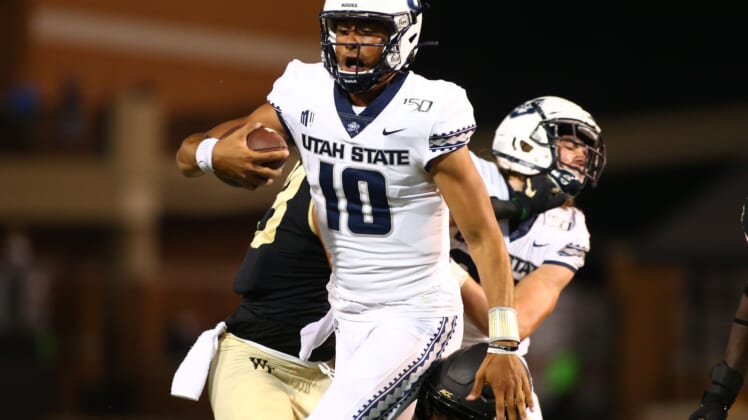 The 2020 NFL Draft took a few twists and turns nobody saw coming as the unconventional virtual affair played out Thursday night.

For a little while, nothing surprising happened as the first three picks went down in very much the same fashion many predicted in mock drafts around the nation. Then, the New York Giants took a player most did not expect, and from there things got quite a bit more entertaining.

These were the most stunning developments from the first round of the 2020 NFL Draft.

Including this pick isn’t meant as a knock against Andrew Thomas, who was absolutely rock solid during his playing days at Georgia. Rather, it’s surprising that he was the first offensive tackle selected mainly because while he is a safe pick. Thomas doesn’t have the same high ceiling — he’s not an elite athlete — as Tristan Wirfs, Jedrick Wills Jr. or Mekhi Becton.

Looking at the pick from general manager Dave Gettleman’s point of view, selecting Thomas over the other top tackles indicates the Giants wanted to stay as far away from risk as possible. Still, in a few years, New York may look back with regret at the “safe” selection of this offensive tackle.

Cardinals have Isaiah Simmons fall into their laps

Outside of Chase Young, no defender in the 2020 NFL Draft has the kind of upside to compare to Isaiah Simmons. Think Derwin James, and then throw in a bit of extra potential. That’s the kind of impact this former Clemson Tigers star can bring to an NFL defense. He can literally play anywhere on the field and projects as an elite safety at the NFL level.

With that in mind, it was absolutely stunning to see Simmons fall to Arizona at No. 8 overall. Nobody would have batted an eyelash if he had been selected in the top five of this year’s draft. Simmons is going to be a dominant player for Vance Joseph as a rookie in 2020.

Where were the early trades?

Leading up to the 2020 NFL Draft, there was a ton of talk around the league that big trades in the early part of the first round would dominate the landscape. Fascinatingly, that did not play out. In fact, for the first time since 2015, there were zero trades in the top 10 of the draft.

It wasn’t until the San Francisco 49ers traded the No. 13 overall pick to the Tampa Bay Buccaneers that we finally saw our first trade of the evening. Things heated up in the 20s, but it was a relatively inactive first round from a trade perspective.

CeeDee Lamb falls to the ‘Boys

There was no consensus among NFL Draft experts about which wide receiver was the “best” in this year’s class, but many believed it was Oklahoma Sooners star CeeDee Lamb. Not only did Lamb drop into the bottom half of Round 1, which was a surprise all by itself, but there weren’t many who thought he’d land in Jerry Jones’ lap.

The Cowboys owner was legitimately giddy on the phone talking with new head coach Mike McCarthy as they reeled in Lamb at No. 17 overall.

Honestly, who could blame him? Adding this dynamic after-the-catch specialist to an offense that features Amari Cooper, Michael Gallup, Ezekiel Elliott and Dak Prescott gives the ‘Boys one of the best young offenses in the league.

Raiders reach for a CB

Las Vegas Raiders general manager Mike Mayock was ripped last year for reaching to take Clelin Ferrell with the fourth overall pick. Ferrell ended up having a rather weak rookie season. So, while Mayock was ecstatic when the Raiders picked up Ohio State cornerback Damon Arnette with the 19th overall pick in the 2020 NFL Draft, I was not.

Most had Arnette as a Day 2 pick. It’s also worth noting that, before the draft, Mayock made a big point about not reaching for a need (the Raiders needed a cornerback). So, color me surprised that he apparently did just that.

Most people thought the New Orleans Saints would target a playmaker on either side of the ball. Not many predicted they’d go with an interior lineman. So, right off the bat it was surprising to hear Cesar Ruiz’s name called when the Saints picked 24th overall in Round 1 of the 2020 NFL Draft.

This isn’t a “bad” pick, by any means. Ruiz was an absolute mauler at Michigan and can play any interior line position. The Saints love to run the ball and could do that more than ever in Drew Brees’ age-41-season. But it’s worth noting that the Saints just paid guard Andrus Peat in a huge way, and that they drafted center Erik McCoy, who started every game, in the second round last year.

Packers traded up for Jordan Love

Many Green Bay Packers fans were hoping their team would trade up in the first round of the 2020 NFL Draft. Only, they wanted the Packers to trade up for a receiver, given the team’s desperate need for a second playmaker on the perimeter to pair with Davante Adams.

That didn’t happen. In fact, the biggest stunner of the first round happened when Green Bay traded up from No. 30 overall to No. 26 overall to select Utah State quarterback Jordan Love. It’s a move that had been foreshadowed in the past, but leading up to this year’s draft it seemed the Packers would build up their roster to bolster Aaron Rodgers.

Nobody saw this coming, and the NFL community was shocked by this trade.

In no way was it surprising that the Seattle Seahawks took a player in the first round most did not have as a Day 1 pick. That happens practically every single year. But when general manager John Scheider called for Texas Tech linebacker Jordyn Brooks, it was stunning because LSU stud Patrick Queen was still on the board.

Queen is a prototypical do-it-all linebacker who is perfect for the modern NFL. Brooks, on the other hand, has limited coverage skills and is best suited for stuffing the run. It really doesn’t make any sense that he went before Queen. No matter which team was on the board.

Just when it looked like there would be no first-round running backs in the 2020 NFL Draft, the Kansas City Chiefs gave us one of the biggest surprises of the night. With the final pick of Round 1, they selected LSU product Clyde Edward-Helaire, which stunned everyone.

This pick will absolutely ignite an already crazy offense. Edward-Helaire is a stud catching passes out of the backfield, and his agility when running between the tackles (watch this) will be nightmare fuel for opposing defenses already stressed to the max trying to contain Patrick Mahomes and his electric passing game.