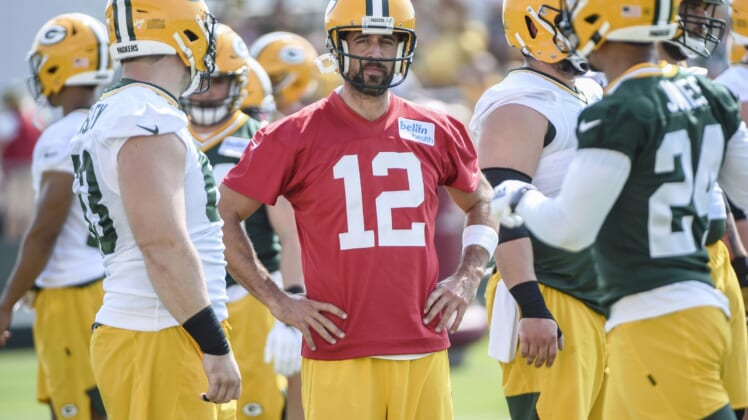 Hyping up NFL storylines is fun. It’s great to speculate endlessly about what may happen, especially when talking about new players and new schemes set to take center stage at the start of a new year.

However, more often than not, things don’t play out the way it’s been talked about during the summer months. With that in mind, it’s time to get busy busting up some of the talking points you’ve been hearing from pundits around the NFL heading into the 2019 season.

Tom Brady is set to become a free agent after the 2019 season due to the way his recent contract was laid out. He’s also put his Boston-area home on the market (for a cool $39.5 million), so naturally there has been plenty of talk that this could be his last year playing for the New England Patriots. But let’s just stop for a second and realize that this is the narrative every single year and has been for a while now. Brady is old by NFL standards, set to play his Age 42 season. But he isn’t slowing down. And chances are, he’ll be playing for the Pats once more in 2020.

News that the Baltimore Ravens are developing a supposedly revolutionary offense that could signal the next evolution in the NFL is pretty exciting. Certainly, Lamar Jackson has a unique skill set that lends itself to dynamic plays. And the Ravens have some intriguing talent on that side of the ball that can aid the young quarterback’s development. Yet as Chris Mueller of Yardbarker recently argued, the chances of it all coming together the way Baltimore hopes are pretty slim. Let’s put a pin in this one and come back to it in December, shall we?

Ezekiel Elliott has been hanging in Cabo instead of practicing with his Dallas Cowboys teammates this summer. He’s threatened that he won’t play at all this year without a new contract. On the other side, Dallas brass has vocalized some interesting counter-points to setting a new market for running backs. Pretty grim, right? Not really. This is all just posturing. When it comes down to brass tacks and Week 1 approaches, Jerry Jones and Co. will cave and give Elliott what he wants. Because let’s be honest: Elliott is Dallas’ offense. Period.

The New York Jets are going to look a whole lot different on offense this year, thanks to the arrival of Le’Veon Bell. He’s been one of the league’s best running backs for years, and he certainly will elevate what the Jets can do offensively. Yet the notion that Bell is going to transform this offense into a juggernaut is over the top. It’s still going to come down to whether Sam Darnold can take a big step forward in his development — a question that we don’t have an answer to at this point. On top of that, Bell will be running behind an offensive line that doesn’t compare to the dominant units he had in Pittsburgh.

From a pure talent perspective, there is no doubt that the Cleveland Browns have a shot to win a ton of games in 2019. The team’s offense has the potential to be one of the best in the league, and defensively the Browns are stacked. Because of this, Cleveland is getting plenty of hype as a legitimate Super Bowl contender. There are a number of reasons to doubt that, however, the primary one being rookie head coach Freddie Kitchens. If Kitchens is in over his head as some believe he is, then the Browns could become one of the biggest disappointments of the 2019 season.

Aaron Rodgers and his former head coach, Mike McCarthy, didn’t get along toward the end of McCarthy’s tenure in Green Bay. So, when Rodgers started making eyebrow-raising comments about rookie head coach Matt LaFleur, many openly wondered if another cycle of dysfunction was about to begin anew. Let’s just step back for a minute and see what actually happens once the season begins. Rodgers is a tenured veteran who has shown a willingness to speak his mind, but in no way does this indicate that the Packers are set to implode or that LaFleur is in over his head.

The Jacksonville Jaguars fell apart last year and were one of the biggest disappointments in the NFL. A big part of that was that Blake Bortles gave the offense absolutely no chance to succeed. So, the Jags dumped Bortles and signed Super Bowl MVP Nick Foles to come save the day. He may very well be able to boost the offense in a big way. Then again, he could struggle to duplicate the success he had with the Eagles. The Jaguars also weren’t in top shape defensively last year, and star cornerback Jalen Ramsey continues to be a potential distraction this summer. The AFC South is also very tough. A lot of things could go wrong this year, and the Jags could easily miss the palyoffs once more.

Cam Newton underwent surgery on his throwing shoulder back in January, his second surgery on this shoulder in less than three years. He has been sitting out of training camp practices and won’t play in Week 1 of the preseason. Not surprisingly, there’s been some concern about his ability to play at a high level throughout the 2019 season. The Panthers aren’t concerned, however. In fact, offensive coordinator Norv Turner has been downright giddy about Newton’s progress, saying, “Wait ’till the first game.” So we’ll wait, and in the meantime you might want to get some popcorn ready.

It’s pretty hard to find anything negative being reported as it concerns No. 1 overall pick Kyler Murray. His own teammates have done nothing but gush about his grasp of Kliff Kingsbury’s offense, and about his pure talent. With that in mind, it’s easy to get hyped about what the Arizona Cardinals will do on offense in 2019. But let’s not crown Murray just yet. He’s still going to be a rookie this year, and rookie quarterbacks typically get ground into paste by NFL defenses.

The Oakland Raiders won’t be the Oakland Raiders next year. Following the 2019 season, they’ll move to Las Vegas for good. There’s been a lot made out of this transition and how difficult it will be for local fans, but if we’re honest the 2019 season is really a bonus for Northern Californians. Remember, the Raiders were supposedly not going to play in Oakland this year. Then, plans fell apart to move, and they had to come crawling back to the Bay Area without any other options. Is it ideal? Not really. But it’s certainly not as big a deal as some have made it out to be.