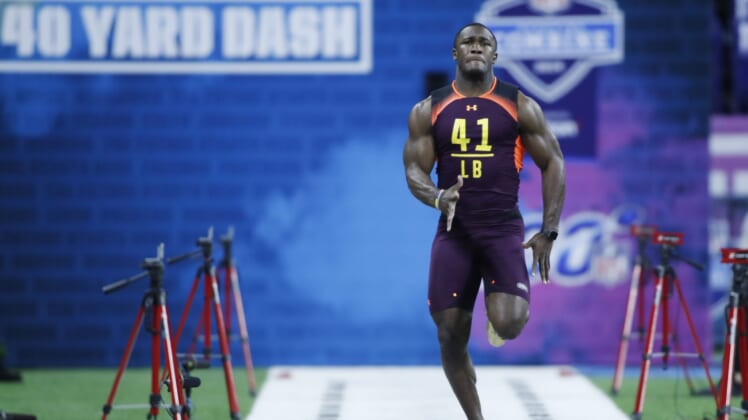 There are few annual events as unpredictable as what transpires every spring in the NFL. The 2019 NFL Draft will be full of surprises as teams make picks nobody saw coming.

That doesn’t mean we can’t have some fun.

With that in mind, take a gander at 10 bold predictions for the 2019 NFL Draft.

Despite a blazing inferno of rumors that the Arizona Cardinals are going with Kyler Murray, they stick with Josh Rosen and take the best player available. Bosa is a nightmare off the edge. He is quick, strong, and brings a nice repertoire of pass-rushing moves to the NFL. Teaming him up with Chandler Jones gives Arizona one of the best 1-2 punches on the edge the league has to offer.

Dolphins trade up to No. 2 for Kyler Murray

Arizona’s selection couldn’t make San Francisco 49ers general manager John Lynch happier as he gets the bidding war he wanted. In this scenario, Miami comes out on top and selects the Heisman Trophy winner. There have been reports that the Dolphins are going to tank this coming season to try and land Tua Tagovailoa in 2020. However, the team has insisted that is not the case. Here, the Dolphins get to prove everyone wrong by swinging for the fences.

The latest reports swirling around Oakland is that Jon Gruden and Mike Mayock have a surprise up their sleeves at No. 4 overall. Quarterback has been a hot topic, and the Raiders have been connected to Dwayne Haskins. However, as we survey the team’s greatest needs it makes sense that the Raiders could be targeting White, who is this year’s top linebacker. He’s a leader, an instinctive player who has a nose for the ball, and a sideline-to-sideline speed demon.

Daniel Jones is second QB off the board at No. 6 to Giants

For the longest time, it was thought that the Giants would take Haskins if they selected a quarterback at No. 6. However, as the draft approaches there have been more whispers that the Duke product might actually be the pick. It makes some sense, as Jones has a lot of the same characteristics that Eli Manning possesses. Yet in a few years it seems likely this will be another big move the Giants end up regretting in a big way.

Washington trades up to No. 9 for Drew Lock

Denver has Joe Flacco, who does not want to have his role questioned this season. Yet it would be impossible to discount John Elway selecting the big-armed quarterback out of Missouri, nevertheless. With that in mind, Washington — a team that has more need at this position than most — leaps over the Broncos to secure Lock. Jay Gruden would likely do cartwheels to have a shot at coaching a quarterback with Lock’s potential. Accuracy concerns aside, he has everything else you could ask for in a pro quarterback.

Ed Oliver falls out of the top 10

Should Oliver fall out of the top 10? No way. Yet in this scenario there have been three quarterbacks selected, and we expect edge rushers and Quinnen Williams to dominate the top 10. There’s a chance he could fall all the way to No. 14 overall. The Atlanta Falcons would be all too happy to collect the dominant interior lineman and pair him with Grady Jarrett to feature one of the best defensive tackle duos in football.

Dwayne Haskins falls into bottom half of Round 1

There have been rumors that Haskins is the most likely quarterback to slide on draft day. With New York having gone with Jones, and Washington moving up for Lock, Haskins ends up doing just that. If this does occur, the most likely landing spot for the Ohio State quarterback might just be Tennessee. The Titans have to be thinking about moving on from Marcus Mariota, who has proven to be among the most injury-prone quarterbacks in the league.

Rashan Gary falls into bottom half of Round 1

One off the most polarizing prospects in the 2019 NFL Draft, Gary could be drafted anywhere from the top-10 to the 20s. In terms of pure athleticism and potential, he is a rare bird. Possessing elite size (6-foot-4, 277 pounds) and speed (4.58 second 40), he offers plenty of intrigue. However, he never lived up to all his potential as a pass rusher (9.5 sacks in three years) at Michigan, and a shoulder injury could cost him. With that in mind, we predict Gary will fall into the bottom half of the first round. Seattle and Baltimore are ideal landing spots for the Michigan product.

If any team takes a running back in the first round this year, it might be Oakland. The Raiders are reportedly enamored with Alabama’s Josh Jacobs and could take him with one of their late first-round picks. However, there is a wealth of defensive talent atop the draft, and this year’s draft is devoid of a generational talent at this position. Impact running backs are found late in the draft every single year, we’re predicting that none are selected in the first round this year.

Recently, we wrote that New England should take a risk and select Jackson with the No. 32 overall pick. That’s not likely to happen. Yet we’re fairly confident that one team will take a gamble on this project quarterback early in the second round. Though Jackson is extremely raw, he has the skill set to become dynamic once his game is refined. A 6-foot-7, 249-pound athletic marvel, the Buffalo product has a cannon for an arm and has shown the ability to place the ball into tight spaces with touch.