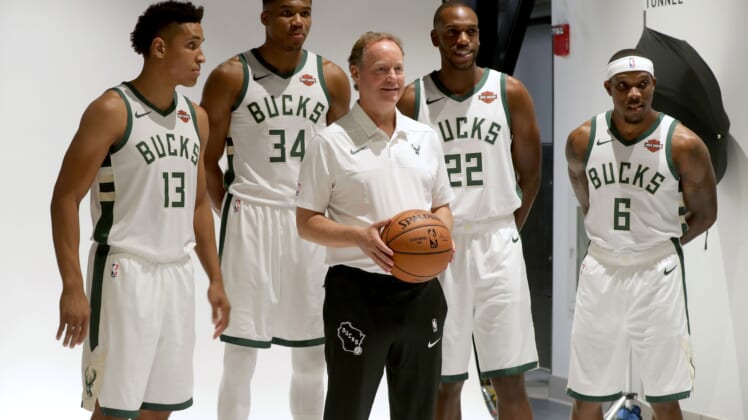 Much like the 2015 Golden State Warriors, the 2019 Milwaukee Bucks have taken the league by storm — to the surprise of almost everyone.

The big picture: Giannis Antetokounmpo and the arrival of head coach Mike Budenholzer has elevated the Milwaukee Bucks to levels unseen in a long time.

Three letters to add to Giannis’ name — MVP: When the Milwaukee Bucks drafted Giannis Antetokounmpo 15th overall in 2013, they were getting a prospect who needed a lot of work. At the time, Antetokounmpo was 6-foot-9 and was still getting the grasp of professional basketball. When he was drafted, he had only been playing for six years.

That didn’t stop Antetokounmpo, affectionately known as the “Greek Freak,” from becoming one of the best players in the league. Since being drafted he:

All that progression culminated in 2019, with Antetokounmpo becoming the MVP favorite by leading the Bucks to an NBA-best 60-22 record while averaging 27.7 points, 12.5 rebounds and 5.9 assists.

Best Buds: Although Antetokounmpo has received much of the praise for the Bucks’ turnaround, one often-overlooked component is the arrival of head coach Mike Budenholzer.

An assistant coach with the San Antonio Spurs for 17 years, Budenholzer was able to take what he learned under Gregg Popovich and utilize that once he became a head coach.

As a coach, Budenholzer has:

Budenholzer’s offense is focusing on blitzing opponents with speed and accurate 3-point shooting. In Milwaukee, he has added another wrinkle: having four shooters on the court at all times to complement Antetokounmpo’s drives to the basket.

How the Deer learned from Dub Nation: Since the Warriors’ rapid ascension, many teams have tried to emulate Golden State’s gameplan, albeit ineffectively. However, the Bucks took what worked with the Warriors and Spurs and integrated that into their system.

While the Bucks’ accomplishments are impressive, it is very similar to the 2015 Warriors in that:

What differentiates the 2015 Warriors and the 2019 Bucks is that the Warriors led the league in 3-point shooting at almost 40 percent from 3-point land. This is thanks to Stephen Curry and Klay Thompson — the “Splash Brothers” — shooting 44 and 43 percent, respectively.

On the other hand, the Bucks are 14th in the league in 3-point shooting percentage at 35 percent. Malcolm Brogdon and Tony Snell lead the way for the Bucks at 42.6 and 39.7 percent.

The bottom line: Considering the 2019 Milwaukee Bucks’ very quick ascent to the top of the Eastern Conference, it’s very easy to compare them to the 2015 Golden State Warriors.

Whether or not they are able to replicate the Warriors’ immense success, both in the regular season and in the playoffs, remains to be seen. Though with Budenholzer and Antetokounmpo at the helm, expect the Bucks to be perennial title contenders.