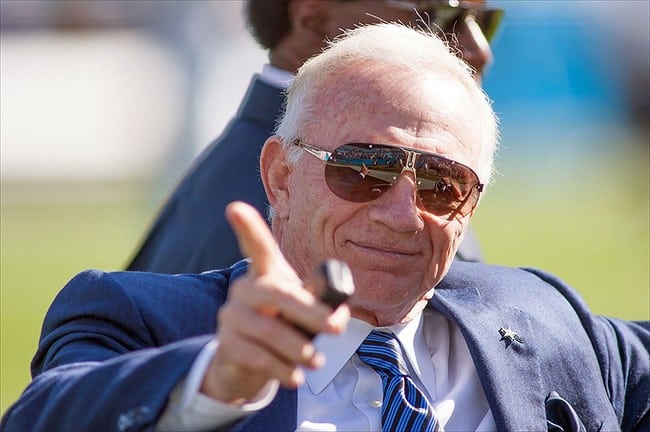 Following the blockbuster trades of Demaryius Thomas and Golden Tate, the trolls on Twitter have now set their focus on roasting the Dallas Cowboys.

As we all know, the Cowboys gave up first-round pick to the Oakland Raiders in exchange for wide receiver Amari Cooper. As such, many out there seem to think the Cowboys trading for a veteran receiver, such as Thomas or Tate, would have been a better plan.

The Cowboys missed an opportunity to trade for Golden Tate since they already pulled the trigger on Amari Cooper at the cost of a first round draft pick. Who would you rather have rookie receiver Michael Gallup be mentored by? #FantasyFootball pic.twitter.com/sJUDfg69lF

Cowboys gave up a first for Amari Cooper.

Eagles gave up a third for Golden Tate. pic.twitter.com/snDOqJaKPG

Cowboys really sent a 1st round pick for Amari Cooper and we got Golden Tate for a 3rd pic.twitter.com/XzaAEqGVe2

Ever spend big money on a pair of kicks only to have your rival roll up with a better pair that cost $100 less?

That's how the Cowboys must feel watching the Eagles get Golden Tate for a 3rd.

When you’re a #Cowboys fan and they just gave up a first-rounder for Amari Cooper, only to see Demaryius Thomas go to the #Texans for a mid-round pick ?‍♂️ pic.twitter.com/Chz1kZ6MoA

Cowboys: We'll take the guy who disappears for full games for a 1st.

The cowboys gave up a 1st round draft pick for amari cooper. The eagles gave up a third for Golden Tate. pic.twitter.com/QEc03awxGX

Houston lose Will Fuller but nab Demaryius Thomas 2days later yet takes an act of Congress for @dallascowboys to get Amari Cooper. Then we end up getting robbed of a 1st round pick. Smh

Cowboys trade a 1st rounder for Amari Cooper and watch the Eagles grab Tate who has better numbers for a 3rd round pick aaaand cue the Curb theme for Jerry ? pic.twitter.com/CTrwbcHEIh

The Amari Cooper/Tate/Thomas trades is like you dropping $1200 on the iPhone X but watching your friends get the iPhone 8/7 for $400. Yeah it’s newer, but is it REALLY that much better?