For many college football fans, no player is more exciting than one who is a legitimate threat to score a long touchdown on any given snap.

Whether it’s a mobile quarterback, elusive running back or speedy wide receiver, they’re capable of ripping through defenses. They can sprint past everyone right off the snap or even turn a broken play into a touchdown celebration within seconds.

Overall, they make life miserable for the opposition. These are the 15 most dangerous, most exciting big-play threats heading into the 2018 season.

During his first season at Oklahoma, Marquise Brown grabbed at least two passes in every appearance. But that doesn’t mean his two- and three-catch showings weren’t productive. Brown topped the 100-yard mark or grabbed a touchdown in six different games, and he was one of only seven players in the country with at least three 70-plus-yard receptions. Plus, his seven catches of 50-plus yards leads all returning players. The Sooners are shifting from Baker Mayfield to Kyler Murray, and Brown will remain the preeminent downfield threat.

While the team trudged to a 2-4 start, AJ Dillon eclipsed the 100-yard plateau only once. From then on, he turned into the nation’s most prolific runner. In six of Boston College’s next season games, Dillon rattled off 149-plus yards. Plus, per Sports-Reference, only Rashaad Penny had more performances of 190-plus yards than Dillon’s four. This season, the Eagles boast seven offensive linemen with at least 10 career starts. That experience should lead to another enormous year for Dillon, and it should begin immediately instead of midway through October. 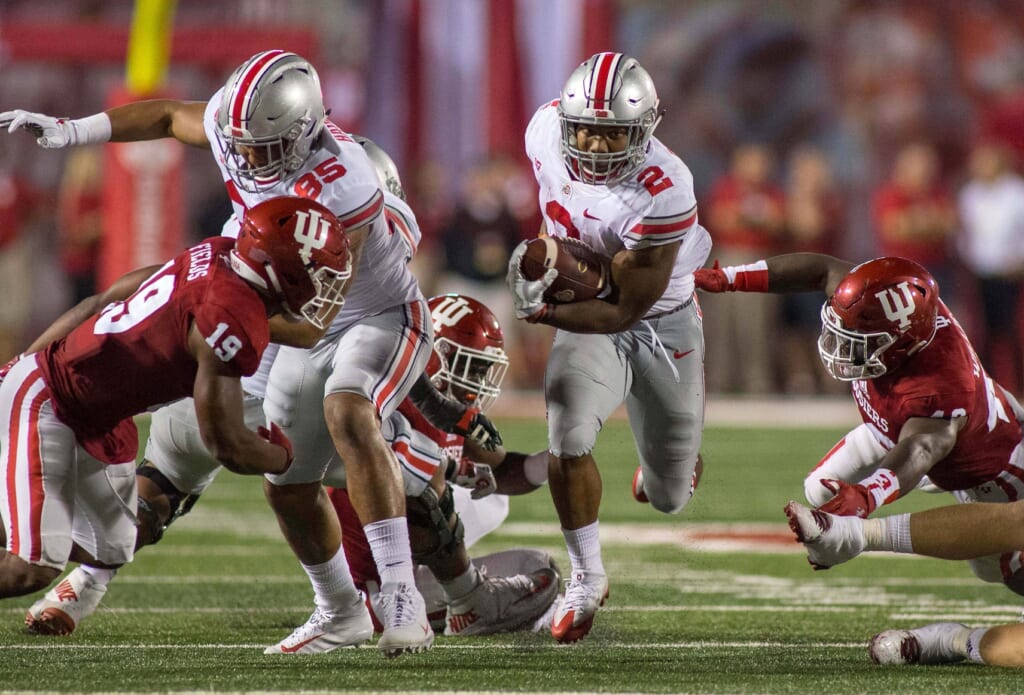 Even when J.K. Dobbins isn’t breaking off an enormous gain, he’s still shredding defenses. As a freshman, his 10 gains of 30-plus yards tied for the eighth-most nationally; there’s plenty of explosiveness to his game. But what makes Dobbins especially dangerous is he averaged 7.2 yards — No. 14 in the FBS — over 194 total carries. That performance suggests he’s often one missed tackle away from ripping off enormous gains. Although he shares the backfield with a future pro in Mike Weber, Dobbins is the Ohio State runner defenses fear most.

In case you’re curious about Travis Etienne’s speed, one simple highlight from Clemson’s victory over Louisville tells the story. The freshman brushed off a tackle, then began his gallop down the sideline. In the time a defensive back ran 15 yards, Etienne covered 20. His burst, acceleration and top-end speed are all undeniably elite. The rising star ended his debut season with 766 yards on 107 carries, ranking 16th nationally with a 7.2-yard average. If Etienne finds a crease, there’s a good chance Clemson is getting six points.

When quarterback Drew Lock uncorks a deep ball, Emanuel Hall is ready to track it down. In 2017, the fleet-footed wideout posted a ridiculous 24.8-yard average thanks to 817 yards on 33 catches. That clip ranked second in the country. Additionally, only two players logged more receptions of 40-plus yards than Hall’s nine, and neither one is returning to college football in 2018. Missouri has another big-play standout in Johnathon Johnson, so defenses can’t simply key on Hall. That assistance will only make the rising senior more effective.

In two seasons at Oklahoma State, Justice Hill has topped the 1,000-yard mark both times. He scampered for 1,142 yards with 12 carries of 20-plus yards as a freshman, then increased those totals to 1,467 and 16, respectively, in 2017. Hill’s jump-cut is a filthy move, one that’s allowed him to create several explosive gains. Given the personnel changes for the Pokes in 2018, we’ll probably see it more often, too. Oklahoma State must replace Mason Rudolph, James Washington and Marcell Ateman. Expect Hill to take on a heavily featured role this season.

Perhaps the fastest player in all of college football, Adrian Killins has made a habit of flying past defenses. As a freshman, he scored an 87-yard touchdown on his lone carry against Michigan. Last season, Killins broke off seven 20-yard gains in only 122 attempt. He ended the season with 790 yards, boasting a 6.5-yard average that ranked 28th nationally. Killins’ production has been somewhat capped by a rotation, but opponents know all about his speed. Even Auburn players, prior to the Peach Bowl, shared their respect for Killins’ top gear. 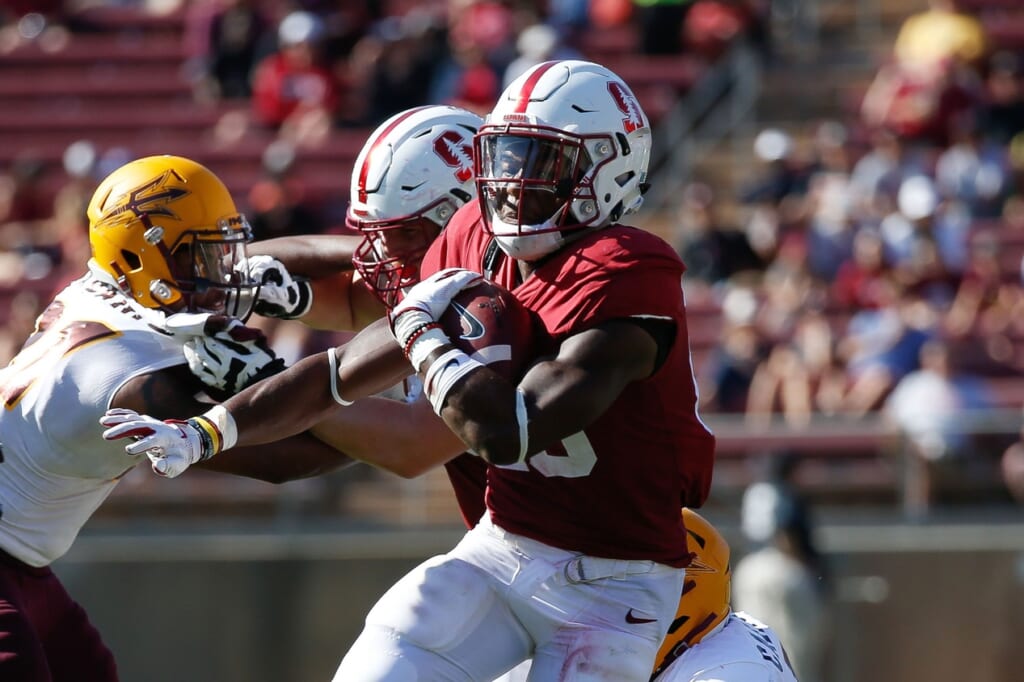 The runner-up in Heisman Trophy voting set an impressive record as a junior. Bryce Love ripped off 13 runs of 50-plus yards, smashing the previous mark of 10. Unsurprisingly, he also co-led the country with seven gains of 60-plus yards. Love ended the outstanding year with a Stanford-record 2,118 yards on the ground, scoring 19 touchdowns. The All-American running back decided to return for his senior season, and the Cardinal bring back six offensive linemen with starting experience. Love’s breakaway runs should be a regular sight once again.

In 2017, Malcolm Perry posted the fourth-highest rushing average in the nation. He amassed 1,182 yards on only 138 carries, posting an 8.6-yard clip per attempt. Most impressively, though, Perry still notched a 7.7-yard average after switching from running back to quarterback over Navy’s final four contests. That’ll be his full-time position in 2018, and increased touches should only showcase his ability to scream past defenders. Last season, he was the only FBS player to tally a pair of 90-yard gains on the ground.

Although he only appeared in four games last season, Chris Platt left an indelible mark on the stat sheet. The speedster made four receptions of 70-plus yards, which led the country. Yes, not a single other player in the FBS accomplished the same feat over the whole season. However, a knee injury ended his 2017 before September ended. Platt has 62 receptions for 1,123 yards for a remarkable career average of 18.1 yards. He needs to develop a rapport with Charlie Brewer, but it shouldn’t take long for that connection to shine.

Devin Singletary is a workhorse, and he’s an proficient one. While tying for the most carries in the Football Bowl Subdivision at 301, the then-sophomore’s 6.4-yard average still ranked 31st. Only six players ahead of Singletary recorded at least 15 attempts per game. That combination of volume and efficiency is remarkable. He wrapped up the stellar campaign with 1,920 yards and a nation-high 32 touchdowns, and Singletary’s 19 gains of 20-plus yards tied for the fifth-most, too. Heading into the 2018 season, he’s a clear All-American favorite. 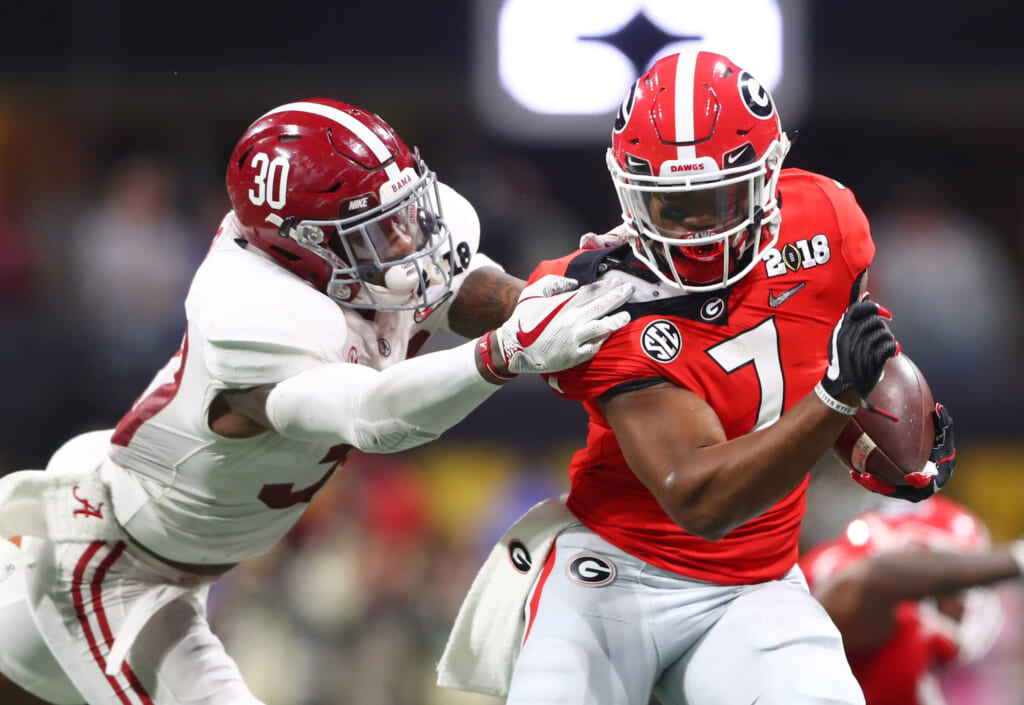 Georgia lost standout tackle Isaiah Wynn to the NFL, but the other four starting offensive linemen are back. Get ready for a breakout season from D’Andre Swift. Although he served as the third-stringer behind Nick Chubb and Sony Michel last year, the speedy freshman cruised to 618 yards on only 81 attempts — 18 of which covered 10-plus yards. His 7.6-yard average ranked 10th in the FBS among qualifying players. Swift is an electrifying talent, and 2018 will be the rising sophomore’s first true opportunity to show it on a weekly basis.

Soon after replacing an injured Brandon Dawkins against Colorado, Khalil Tate joined Louisville’s Lamar Jackson as the nation’s most explosive mobile quarterbacks. Tate racked up 20 gains of 20-plus yards, 11 of 40-plus and an FBS-high five of 70-plus. Despite playing the majority of only nine games, Tate amassed 1,411 yards and 12 touchdowns on the ground. Oh, and he threw for 1,591 yards and 14 more scores. Sustaining that ridiculous pace in 2018 is a huge ask, but Tate’s playmaking ability demands complete respect.

The clear choice for Big Ten Freshman of the Year in 2017, Jonathan Taylor accumulated 1,977 yards during his debut season. While the sturdy back churned out the country’s second-most gains of 10-plus yards, he also ranked in the top seven of 40-, 50- and 60-yard scampers. Taylor displayed a unique blend of power, patience and acceleration en route to finishing sixth in Heisman Trophy voting. Since the Badgers return all five starting offensive linemen, the expectation is Taylor will be a serious contender for the award in 2018.

A rising star at an ascending program, Jeff Thomas should be headed for a breakout campaign. As a freshman, he tallied 22.0 yards per catch and was one of only 19 players in the country with two 70-plus yard receptions. Additionally, Thomas posted a respectable kick-return average of 21.6 yards. Following the graduation of Braxton Berrios, Thomas will hold a significantly larger role in 2018. He’ll play more offensive snaps and potentially add punt returner to his responsibilities. Thomas’ speed will be a game-breaking weapon for the Hurricanes.