More so than previous years, the 2018 NBA Draft is seemingly wide open. We have absolutely no idea who will go No. 2 after Phoenix eventually selects Deandre Ayton with the first pick. Heck, we don’t even know if the Sacramento Kings will hold on to that selection.

Further down in the draft, the Cleveland Cavaliers are picking eighth overall. What will their selection tell us about the future of LeBron James in Cleveland?

And as much as we want to focus on the high-level prospects set to enter the Association, there’s a lot of veterans currently on the trade block? Who will be moved? How will that impact the remainder of the draft and free agency?

These are among the top storylines heading into the 2018 NBA Draft Thursday night in Brooklyn.

Clippers picking twice in the lottery 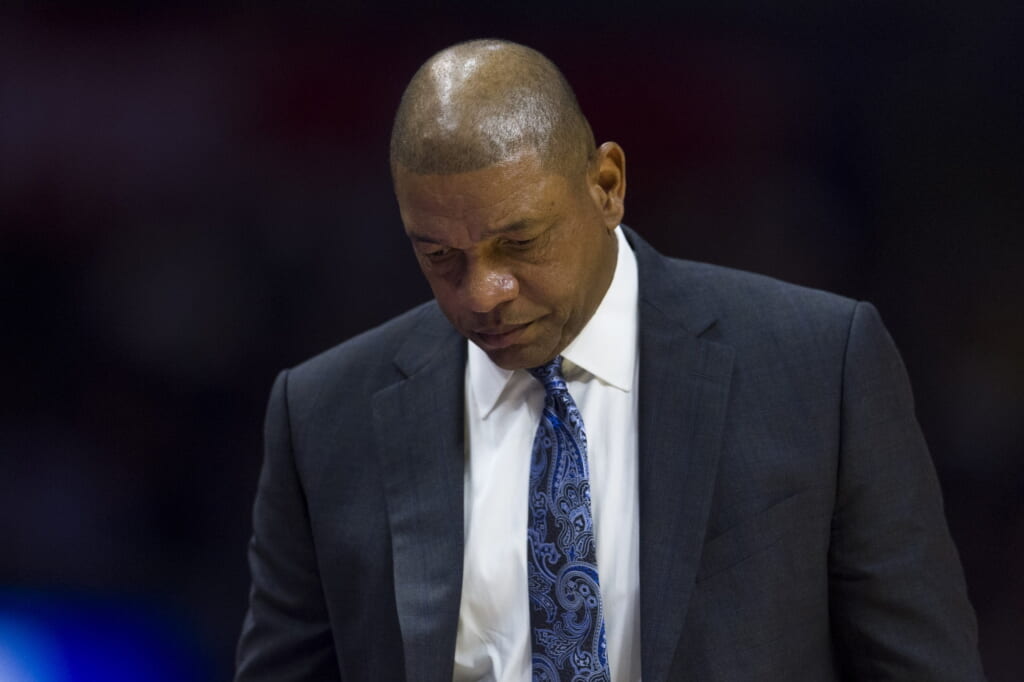 After trading Blake Griffin and Chris Paul over the past calendar year, these Clippers are in the midst of rebranding under the recently extended Doc Rivers. It led to them missing out on the playoffs altogether last season and could lead to DeAndre Jordan moving on in free agency.

While Los Angeles has said it’s reloading, not rebuilding, it has to hit on the team’s two lottery picks (12th and 13th overall) in the draft. That should include the team finding a long-term answer at point guard with the likes of Alabama’s Collin Sexton and Kentucky’s Shai Gilgeous-Alexander potentially being available. Either way, this year’s draft will tell us a lot about the Clippers’ future.

Will Cavaliers pick tell us about LeBron’s future?

We’re likely not going to know for certain James’ plans until free agency opens in July. That’s at the earliest, especially with The King expected to take multiple visits. However, Cleveland can tell us a lot about whether it’s confident in doing enough to retain James based on what it does with the eighth overall pick (acquired from Boston, via Brooklyn).

First off, Cleveland could potentially look to move the selection along with an inflated veteran contract in order to bring in a proven veteran starter. It could also decide to add a rookie that could make an instant impact. Say, Michigan State’s Miles Bridges. But if the team were to add more of a project, it could very well be an indication that Cleveland plans on losing James in free agency.

Mavericks must hit a home run 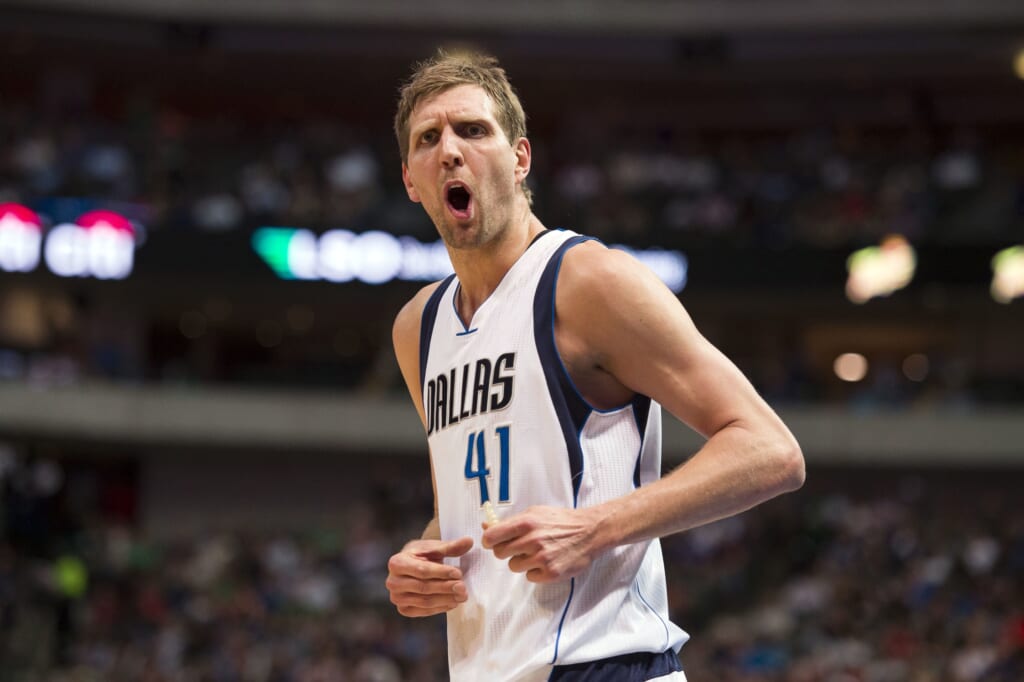 Dallas has one future building block in that of 2017-18 NBA Rookie of the Year contender Dennis Smith Jr. Outside of that, there’s not a whole lot to see here. Nerlens Noel failed to pan out after a mid-season trade from Philadelphia back in 2016-17. Harrison Barnes has played well, albeit not worth the max contract Dallas handed him back in the summer of 2016. Meanwhile, Dirk Nowitzki is a shell of his former self and will be calling it quits here soon.

Dallas isn’t simply in the midst of a transitional period. Instead, the team is in the earlier stages of a complete rebuild. Picking No. 5 overall in the draft, this team needs to hit an absolute home run. That could lead the Mavericks in one of two directions. They might target a high-upside player with a low floor (Michael Porter Jr.) to team up with Smith Jr. Dallas could also go with a safe pick such as Oklahoma’s Trae Young or Duke’s Wendall Carter Jr. Either way, it has to be a home run. That much is known.

Which team will trade into the fop five?

There are rumors circulating that Memphis might look to package the No. 4 overall pick as a way to move on from Chandler Parsons’ bloated contract. Meanwhile, the likes of Philadelphia (rumored to be very much interested in moving up) and the above-mentioned Clippers seem to have the necessary trade chips to make a trade into the top five. We’re certainly expecting some team to make it happen once the draft gets going in Brooklyn.

As of right now, most conclude that there are four top-end prospects in this draft. That list includes Deandre Ayton, Marvin Bagley Jr., Luka Doncic and Mohamed Bamba. Outside of that, there’s about a group of a half of dozen mixed in as second-tier options. Knowing this, teams will have to pay a premium to move up the Grizzlies’ spot at four or above that. 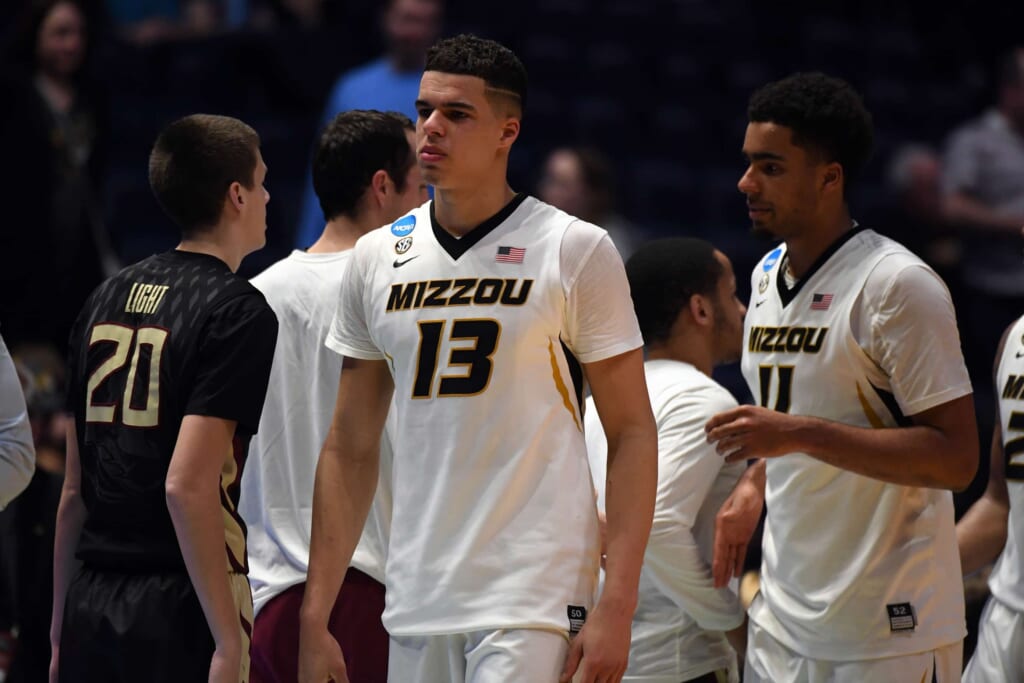 Having missed all but three games during his freshman season at Missouri, this 6-foot-10 forward was already an injury question mark heading into the pre-draft process. His decision to skip the scouting combine altogether coupled with a recent hip injury has some thinking Porter could fall to the end of the lottery in this year’s draft. It would be a dramatic fall for a talented youngster that many had pegged as the No. 1 overall pick prior to last year’s college basketball season.

Previously linked to the Sacramento Kings at No. 2 overall, it will certainly be interesting to see what team takes a chance on Porter. He could certainly go as high as that spot. But the dude could fall completely out of the top 10. It’s an intriguing and potentially drama-filled storyline heading into Thursday.

The Sixers have six picks

The rich get richer. Not only does Philadelphia boast the 10th and 26th picks in the first round, it has four second-round selections on Thursday night. Coming off a surprise conference semifinals appearance, there’s absolutely no reason to believe these Sixers have six roster spots open for next season.

This could go a number of ways. It’s possible Philadelphia falls in love with one of the top prospects. If so, packaging both first round picks, a second rounder and potentially a proven veteran in a move up could be in the cards. Philadelphia also has the opportunity to draft and stash a European star, much like what we saw with Dario Saric years back. Either way, this is certainly a great problem for the rising Sixers to have. 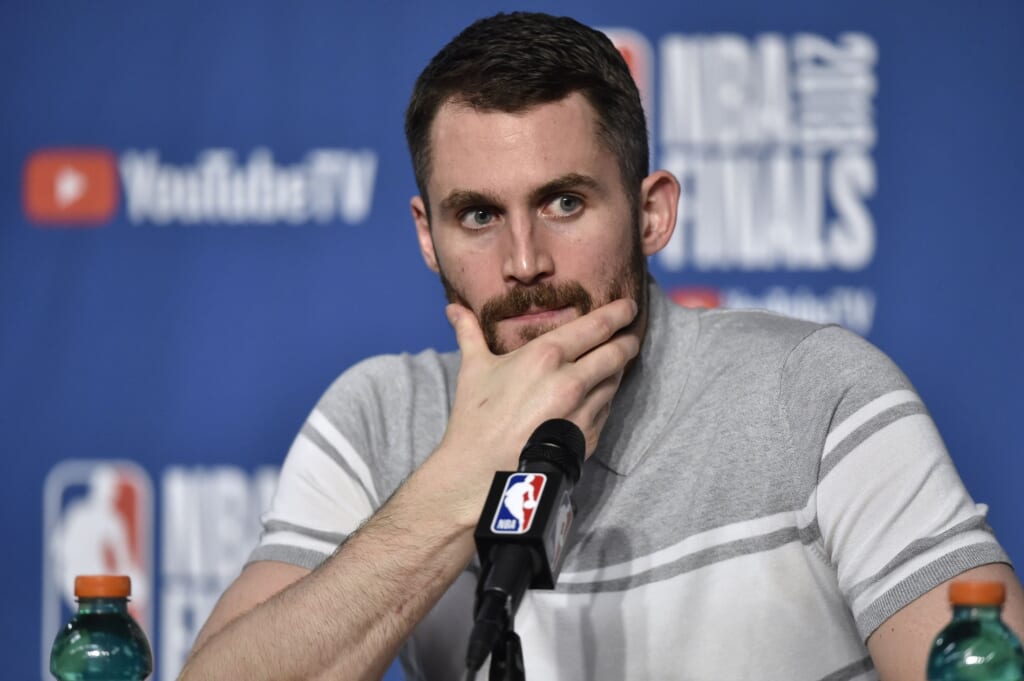 We’ll cover Kawhi Leonard and a potential trade from the Spurs a bit below. That’s a huge storyline here. Though, there’s other veterans who could potentially be moved during the draft. Picking No. 2 overall, a lot of chatter is surrounding the Sacramento Kings as a potential destination for a proven star. The long downtrodden organization also has a lot of talented young players that could be used to facilitate a move of this ilk. Also picking in the top 10, we wouldn’t be surprised to see Memphis, Cleveland and Philadelphia look to move their picks for a proven veterans.

Among the names bandied about in potential trades, it seems highly unlikely that Karl-Anthony Towns and Anthony Davis will be moved. Though, that would certainly set the NBA world on fire. More likely to be traded, the likes of Kevin Love and Kemba Walker could potentially fetch lottery picks. In an NBA summer where teams have very little to spend on free agency, the trade market could very well be active this offseason.

Is there Luka Doncic fatigue?

There’s very little reason to believe this European sensation will fall outside of the top five. It’s more about whether teams are more comfortable going stateside with a top selection. Given that the Phoenix Suns — headed by Doncic’s former coach Igor Kokoškov — are almost certainly taking Deandre Ayton over the Slovenian, there are a lot of questions that have to be raised here.

Should Doncic somehow find himself on the board at No. 4 over No. 5 overall, a plethora of teams will suddenly look to make a jump for the athletically gifted 6-foot-8 teenager. It will almost certainly lead to some major drama.

Where will Grayson Allen go? 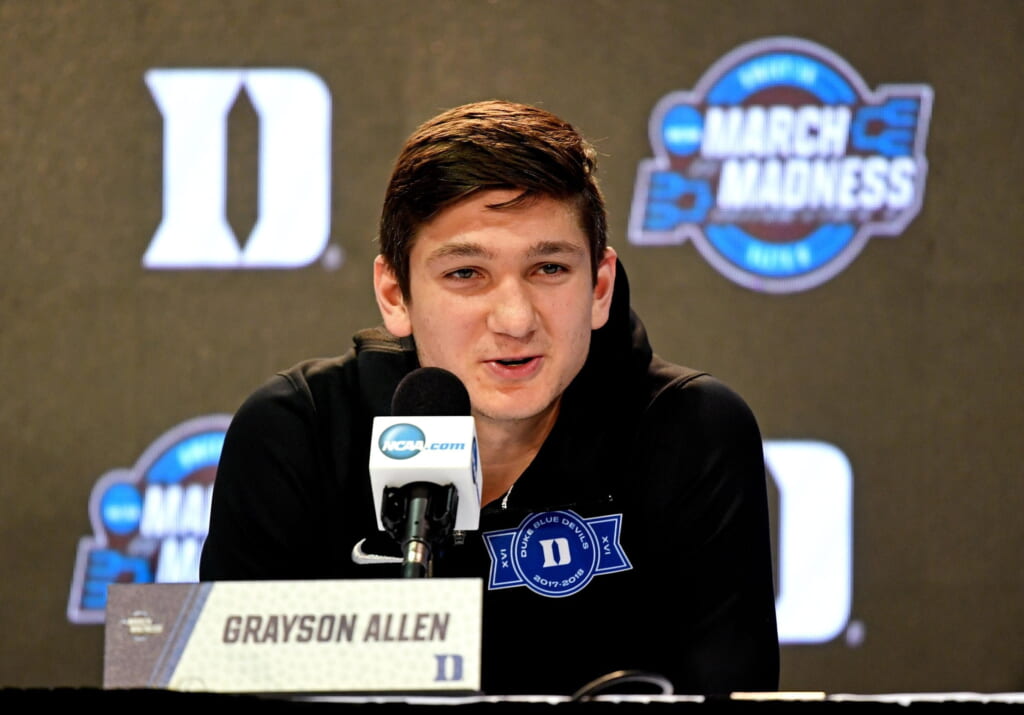 Some expect Allen to go in the first round of Thursday’s draft. If that were to happen, the Boston Celtics at No. 27 overall and Golden State Warriors at No. 28 overall make the most sense. Both are said to be looking for a wing that can extend the court to the three-point range. Allen is most definitely that type of player.

Even then, a more logical landing spot would be at the top of Round 2. That’s where a team like Phoenix or Memphis could use his sharp-shooting ability. More than anything, Allen’s value will be predicated on whether he can reign in the dirty play that seemed to define his career at Duke.

Sacramento Kings plans at No. 2

This team is the truest wildcard. Of the four players we previously mentioned that stand above the rest, Mohamed Bamba seems to be the most unlikely option to end up in California’s capital city. Everything else seems to be on the table, including the above-mentioned Michael Porter Jr.

What Sacramento does with this selection will have wide-ranging ramifications throughout the rest of the lottery. If the team decides to trade out from two for a proven veteran, it could reshape basketball in Sacramento while defining the remainder of the draft. Yeah, Sacramento is at the forefront of the NBA world for the first time in a while. 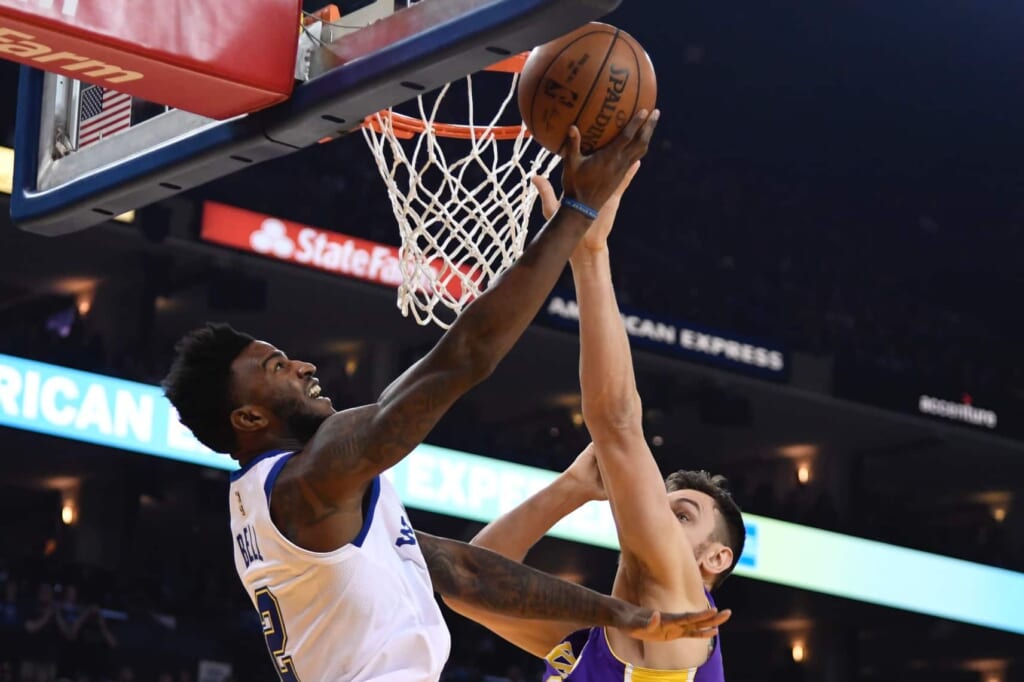 This is almost New England Patriots-level stuff right here. When Warriors general manager Bob Myers calls you up on draft day, simply ignore the phone or hang up on the former NBA executive of the year. It’s not going to end well.

Just ask the Chicago Bulls, who sold the 38th pick in last year’s draft to Golden State. All the Warriors did with that selection was pick up reigning Pac-12 Defensive player of the Year Jordan Bell. He responded by putting up 10 points and six boards in Game 3 of the NBA Finals against Cleveland earlier this month. The Warriors might want to buy a second-round pick, but there’s no reason any other team in the Association should bite. Come on, guys.

Will Kawhi Leonard be dealt?

This depends on a couple different factors. If the Spurs are indeed looking to trade Leonard, wouldn’t they want to pick up at least one first-round pick in this year’s draft as part of the package? After all, it is the most stacked draft we’ve seen come down the pike in some time. Secondly, just how quick will San Antonio pull the trigger if it receives a massive offer that looks like the one the team is seemingly demanding?

Let’s say for a second that Sacramento offers up the second pick and a young player in return. Can San Antonio even think about turning this haul down? More than anything, the 2018 NBA Draft will be defined by what the Spurs do (or don’t do). A Leonard trade would shake the foundation of the NBA heading into free agency. If he’s not moved during the draft, it will be one of the top storylines heading into July.