Bowl season officially kicked off Saturday with a five-game FBS slate, and in true college football fashion, it got a little weird, too.

Let’s look back at the best and worst of 2017’s opening bowl games.

The senior found his target on 24-of-31 passes for 305 yards and four scores, also crossing the goal line once as a runner. Silvers hit a season-long 59-yard completion during the 50-30 triumph over North Texas in the R+L Carriers New Orleans Bowl.

Even better, the victory meant Troy set a program record for single-season wins (11) as a member of the Football Bowl Subdivision. Silvers had already led the Trojans to a new mark of 10 last year. He’ll be remembered fondly in Troy history.

North Texas entered the clash with the nation’s 18th-ranked offense, but the unit faltered both in production and ball protection.

The Mean Green trudged to season-worst marks of negative-eight rushing yards, 295 total yards and five turnovers. Troy scored 28 points off those takeaways, including 21 in the decisive second half.

Mason Fine shattered North Texas records this year, but the sophomore quarterback will be disappointed in how he and the Mean Green ended the season.

Although it’s probably not going to become a staple in playbooks, the synchronized spin from a diamonds look certainly was fun.

Alec Dhaenens, John Bates, Matt Pistone and Ryan Wolpin all did a 360 prior to the snap. While it didn’t fool the Oregon defenders, Boise State still scored. Quarterback Brett Rypien whipped a lateral to Wolpin, who flipped over Ugo Amadi to put six points on the board for the Broncos.

Bowl games often bring out the adventurous side of play-callers, and this one will be a highlight of the postseason.

This is painful to say: The legendary trick play failed.

Back in the 2007 Fiesta Bowl, the Broncos pulled off a dramatic upset of Oklahoma thanks to a gutsy two-point conversion call in overtime. Boise State tried to use the Statue of Liberty against Oregon, and the worst possible result happened.

Rypien botched the exchange, and Oregon’s Troy Dye scooped up the bouncing ball. He raced 85 yards the other way to give the Ducks their first points of the game — and they followed it up with pick-six two scaps later.

Boise State managed to overcome the mistakes for a 38-28 win, but it saddened our football hearts to see the Statue of Liberty fail.

For the first time in its brief FBS tenure, Georgia State can celebrate a bowl victory. The Panthers knocked off Western Kentucky 27-17 in the AutoNation Cure Bowl.

Georgia State took full control of the game after halftime, holding WKU to 50 total yards on its first three drives. In the meantime, the Panthers increased their lead from three points to 17. The highlight was a 42-yard touchdown pass from Conner Manning — no, he’s not related to Peyton or Eli — to Roger Carter on a nifty trick play.

Additionally, the victory pushed Georgia State to a school-record seven for the season. Shawn Elliott’s tenure is off to a great start. 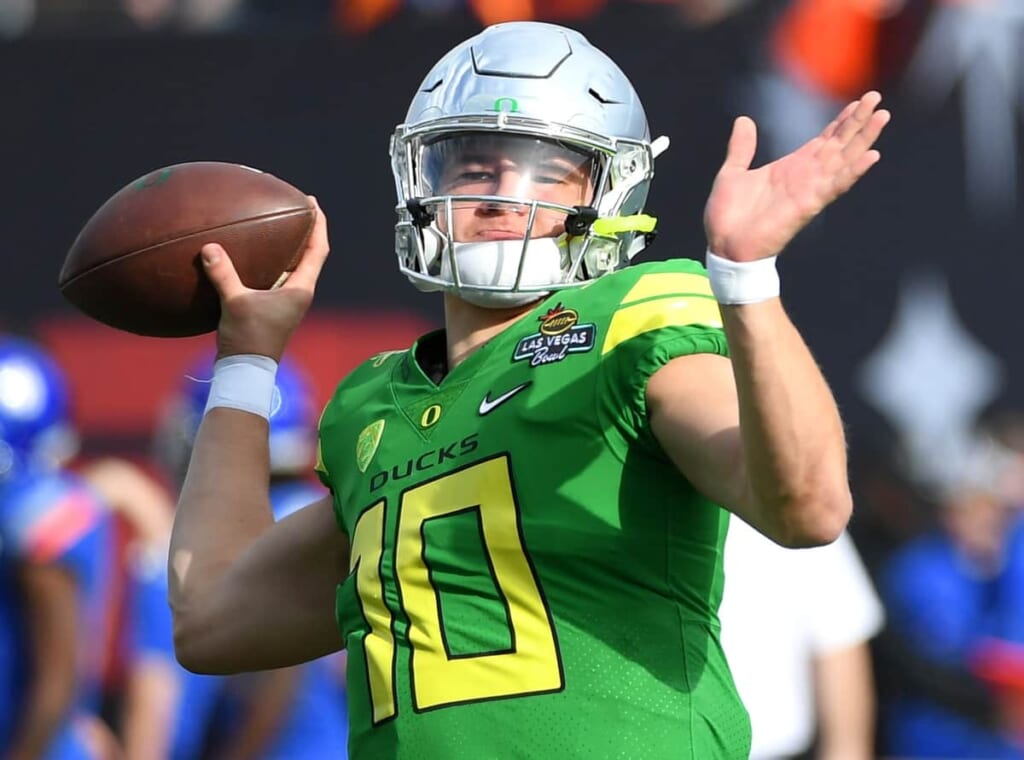 Sure, star running back Royce Freeman decided not to play. His absence hurt, but Mario Cristobal’s debut as Oregon’s head coach was an absolute mess.

Justin Herbert tossed two interceptions for only the second time in 16 career appearances. The sophomore ended with 233 yards, and his final line would’ve looked even worse had he not collected 75 on a garbage-time possession after Boise State built a commanding 38-21 advantage in the closing moments.

Even excluding a 10-yard sack, Oregon mustered a season-worst 62 yards on 27 carries. Tony Brooks-James and Kani Benoit — who both arrived in Vegas averaging at least 5.6 yards per attempt — combined for 24 yards on 15 runs.

The Ducks have some regrouping to do entering Cristobal’s first offseason.

The Thundering Herd were an overthrown pass away from coughing up a 17-point lead, but the offense put Marshall in a position where it could get a little lucky.

It was the first time all season the Herd registered 200 yards both passing and rushing. The balanced day helped Marshall earn the program’s sixth consecutive bowl win.

The nation’s No. 11 offense endured a rough day in scoring territory. Arkansas State had three drives that reached the 25-yard line result in zero points.

While at the Middle Tennessee 23, quarterback Justice Hansen lost a fumble that D.J. Sanders returned 54 yards for a touchdown. Wide receiver Omar Bayless coughed up the ball at the MTSU six-yard line. Hansen threw a fade out of bounds on a 4th-and-goal in the fourth quarter.

Plus, on the final possession of the tilt, Hansen broke the No. 1 rule of late-game situations: He took a sack. Shortly after, it happened on consecutive plays, which burnt the clock. Hansen held the ball too long each time.

Arkansas State had plenty of chances to win, but self-inflicted mistakes kept the Red Wolves from toppling Middle Tennessee.