There’s a lot to love about this college football season. The pure chaos of it all. Everything changing every minute of every Saturday. The fact that we have at least two unofficial playoff games every week the rest of the way.

But that doesn’t mean everything is peachy. Sometimes, we all become an old man yelling at a cloud, and college football has given us a number of those instances this year. Whether it’s teams, coaches, players, or just institutional — a familiar type of issue —  there’s plenty to get mad about.

Here are the 14 most maddening things about this college football season.

We all love college football, but it’d be nice if the games didn’t take upwards of three-and-a-half hours on the regular. We don’t need the clock to stop on first downs, we don’t need penalties called every other play, we don’t need 20-minute halftimes and we don’t need quarter breaks to be any longer than in the NFL. The infuriating thing about this is that it’s so easy to solve. The NFL’s games aren’t short, but they’re horse races compared to college football. Pac-12 after dark is fun, but nobody on the east coast should need to stay up until two in the morning to watch football.

NCAA referees have rendered the idea of challenge flags useless. We all want them to get the call right and replay is a necessary evil. But we don’t need to review every single play, especially once games are out of hand. The onus has to be on head coaches to call out the mistakes of referees. That’s what challenge flags are for, right? If we have an official review every time a call is remotely ambiguous, the strategy gets taken out of it and we spend more time watching Dean Blandino than Baker Mayfield. The NCAA should ban official reviews on all plays other than touchdowns and turnovers. 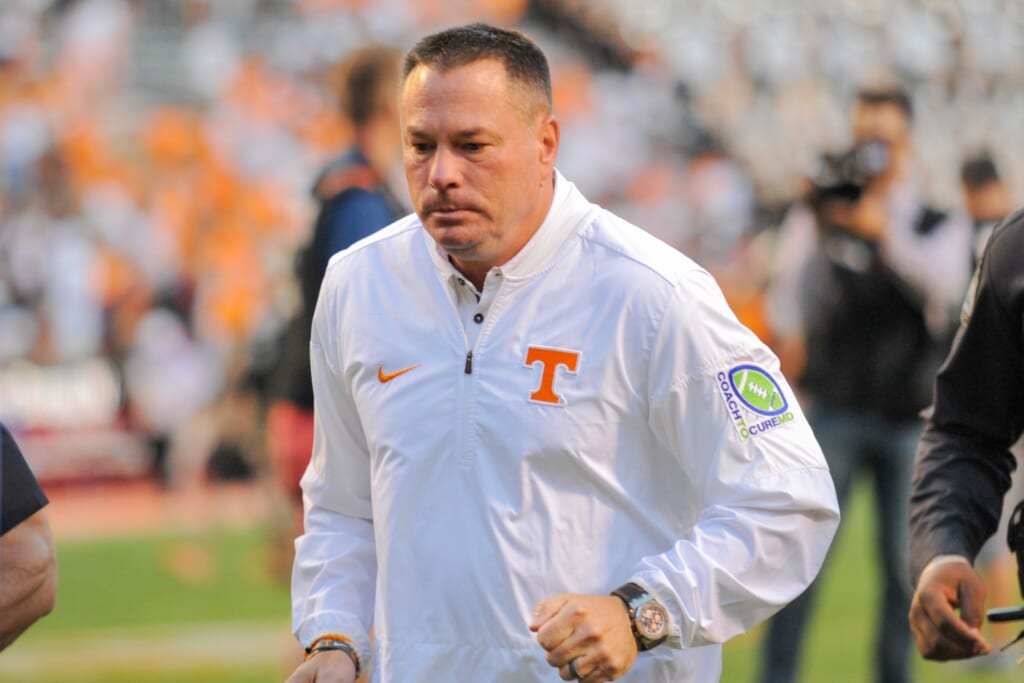 This is almost getting to the point of cruelty toward Jones. Tennessee is an embarrassment. The Vols dropped close games to Florida and South Carolina, thanks in no small part to Jones’ coaching. They got blown out by Alabama and Georgia. They lost to Kentucky. They nearly lost to UMass, at home. The Vols will be lucky to make a bowl this season. Just end it already.

Most informed college football observers are in agreement that Penn State running back Saquon Barkley is one of, if not the best player in the country. Nittany Lions’ head coach James Franklin doesn’t seem to be among them. Barkley got just 14 carries in Penn State’s loss at Michigan State last Saturday. That wasn’t because they had to come back by throwing the ball either — the game was close throughout. The likely Heisman winner has gotten over 20 carries just three times this season. That’s absurd. He should be the biggest part of the Nittany Lions’ offense. Instead, Barkley seems like an afterthought.

We know what USC’s quarterback is capable of doing. He just can’t seem do it with any sort of regularity. This year was supposed to be Darnold’s ascension after he led USC on a nine-game winning streak and Rose Bowl victory last season. Instead, we’ve gotten a mixed bag. As good as Darnold has looked at some points — wins against Stanford, Texas and Utah come to mind — he wilted against Notre Dame and Washington State. For someone who wants to be the No. 1 overall pick, his 11 interceptions are a red flag as well. What makes it all the more worse is that we know he’s better than this.

The lack of attention paid to Central Florida 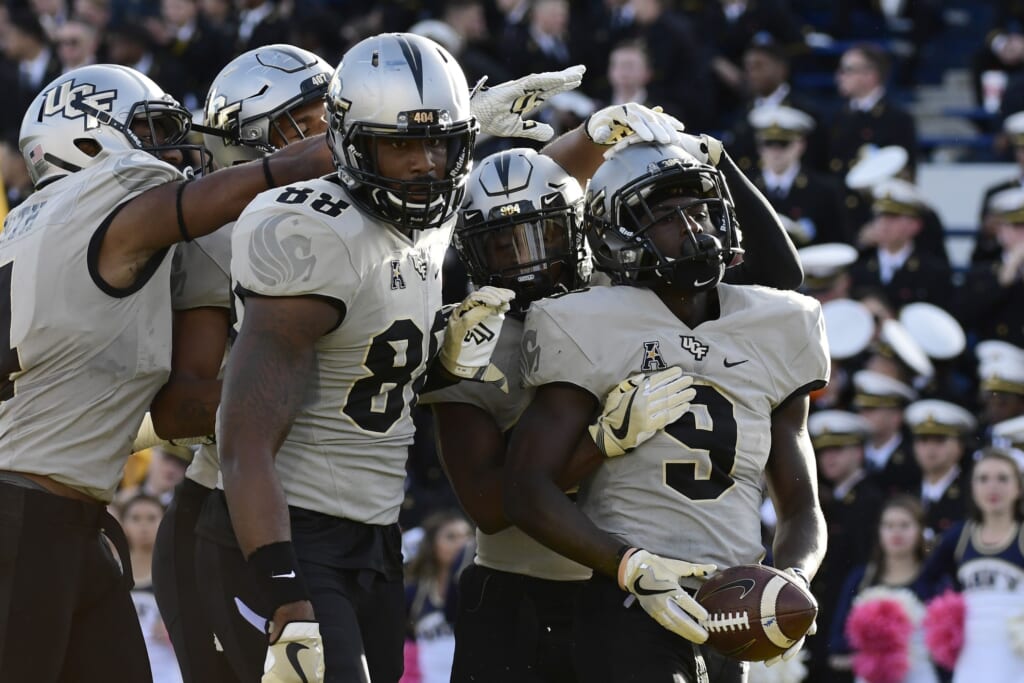 The Knights probably aren’t good enough to compete with the top teams in the Power Five. But they’re ranked fifth in S&P+ right now, and that’s not for nothing. UCF is 8-0 playing in the Group of Five’s toughest conference. More than that, their 31-24 win at SMU this week was the Knights’ only one-score game this year. With such a stacked field, they shouldn’t make the playoff, but their argument deserves to be heard.

The Badgers are 9-0 and we won’t know whether that’s reflective of how good they are until the Big Ten Championship Game (assuming they get there). Wisconsin hasn’t played a ranked team all year — their toughest opponent thus far has been Northwestern. It faces Iowa and Michigan in the next two weeks — two good teams — but both games are in Madison, where the Badgers will likely be double-digit favorites. In other words, there’s no way Wisconsin should lose a game in the regular season if they’re as good as their record. Even in that scenario, however, the Big Ten Championship Game will be the only big test the Badgers get all year.

Anybody thinking Josh Allen should go in the first round

Yup, we’re skipping ahead to draft season, if only for a brief second. Allen has been outplayed by Lamar Jackson, Josh Rosen, Sam Darnold, Baker Mayfield, and Mason Rudolph this season. All of those players have also faced considerably tougher competition. Yet, there’s still first-round buzz around the Wyoming quarterback. Allen has thrown for under 200 yards five times this year and under 100 twice. He consistently falters against tough competition even within the G5. This shouldn’t even be an argument.

The calculus for the Wolverines after Wilton Speight got injured should have been simple: stick with the veteran until you could afford to make mistakes. After Michigan’s loss to Michigan State, in which O’Korn played badly, the Wolverines weren’t out of the playoff conversation. But given their schedule, it wasn’t realistic to suggest they were going to be in it for much longer. Yet, Jim Harbaugh stuck with O’Korn for two more weeks. Michigan pulled out a win at Indiana despite him, then the inevitable collapse happened at Penn State. Even then, O’Korn started against Rutgers until it was overwhelmingly clear he wasn’t the answer. That’s not to anoint freshman quarterback Brandon Peters — the run game has been the biggest reason for the Wolverines’ recent offensive success. But there should have been more willingness to make a change earlier. 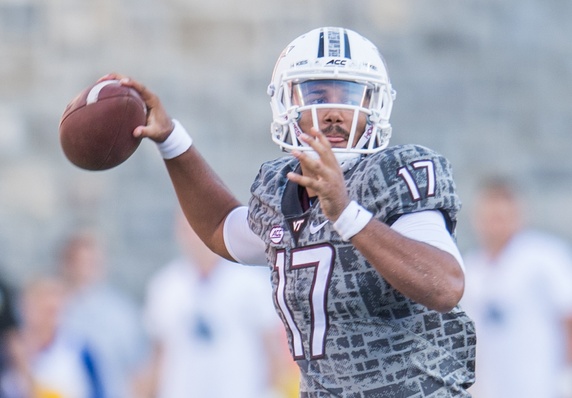 The Hokies have had two chances this season to prove they belong in the top-tier of the ACC. The first was back in September — a night game in Blacksburg against Clemson. The second was on Saturday, another night game, in Miami against the Hurricanes. Virginia Tech didn’t just lose both, neither game was close. The Hokies will likely go 10-2 and call it a success anyway, but this season could have been something more for them.

Only four teams getting into the playoff

This year feels like it will be a catalyst for the CFP to shift to eight teams because there are so many with a case to make. Alabama and Georgia are shoo-ins at this point, even though one will eventually lose to the other in the SEC title game. If Notre Dame runs the table, it is in. The eventual ACC champ — likely Clemson, but if Miami beats the Irish this week, we shouldn’t discount them — has a strong case. That’s four teams and we haven’t even gotten to Oklahoma, TCU, or Washington.

The winner of the Oklahoma-TCU game this week will have the most impressive resume if it wins the Big 12. Meanwhile, the Huskies are likely to go 11-1 and win the Pac-12 for the second straight year. Then there’s the matter of Wisconsin, which might get left out even if they go undefeated and win the Big Ten. That’s seven teams that could have a serious argument (counting just one of Oklahoma/TCU and Miami/Clemson) and UCF could be the eighth. Of course, there are some big assumptions going into this — namely that all of our hopefuls will run the table going forward — but the fact remains: Jim Harbaugh is right that there are more than four teams that deserve a shot.

The Tuesday and Wednesday night MAC games are one of our favorite college football traditions. They’re silly and gritty and delightfully fun and they didn’t start until Week 10 this season. Why? There’s nothing better than football — even bad football — and having it on a Tuesday night is wonderful. Yet, we only get four weeks of MACtion this season. Hopefully, the conference rectifies this heinous mistake in 2018. 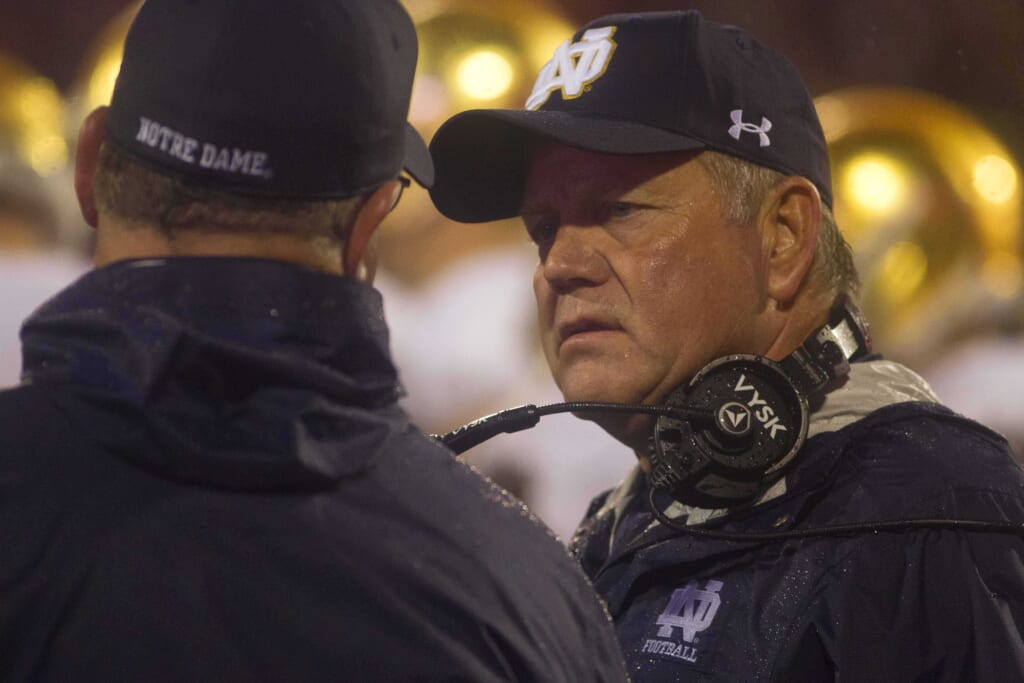 There’s a contingent of fans on the Internet that dislike Notre Dame, but they begrudgingly say that the sport is better when the Irish are good. This is not true. Things are at their most fun when Notre Dame is hapless, when we can get together to laugh at the Irish and the entire culture of arrogance that surrounds them on a weekly basis. Sure, chances are Notre Dame will lose out on a national title and we’ll enjoy it all the same. But there’s nothing like the collective schadenfreude that comes with the Irish struggling on a weekly basis.

College football needs to start staggering its marquee matchups throughout the day. Last week was the perfect example. The noon window was nonchalant and (relatively) boring. This was thanks in part to the Penn State-Michigan State game being delayed, but that game was the only one of that window with any sort of playoff implications. Wisconsin-Indiana, Kansas State-Texas A&M, and Mississippi State-UMass were all interesting for varying amounts of time, but nobody came into the day anticipating those games.

Then at 3:30, there was a hailstorm of amazing games: Clemson-NC State, Ohio State-Iowa, Iowa State-West Virginia, Stanford-Washington State, Notre Dame-Wake Forest. Not to mention the day’s best game, Oklahoma-Oklahoma State, starting at 4 and Penn State-Michigan State coming out of a rain delay in the middle of everything. We went from no interesting games to seven huge games in a matter of minutes.

Then in prime-time, our best games were…Virginia Tech-Miami and an Alabama-LSU game that everyone knew would be both boring and an easy win for ‘Bama? Why was Minnesota-Michigan at 7:30 on Fox instead of Bedlam? Why didn’t any of those awesome 3:30 games get pushed into the noon window? Can we get some balance here? Most people don’t have two screens, let alone seven to keep track of everything.