It was business as usual for Big Ten basketball last season, as the conference placed seven teams in the NCAA Tournament. Three of those teams, Purdue, Michigan and Wisconsin, went on to compete in the Elite Eight. While the conference is preparing for another impressive run, there is an ongoing investigation into the dark side of college basketball. So far, no Big Ten team has been accused of any wrongdoing. Assuming that verdict stands, here’s what to expect out of each team throughout the league this season.

The Fighting Illini may have lost too much talent to make the postseason. The losses of leading scorer Malcolm Hill (who averaged 17.2 points per game), Tracy Abrams and Jalen Coleman-Lands have left perimeter play looking depleted. However, the acquisition of graduate transfer Mark Alstork is a silver lining for Illinois. Alstork averaged 19 points, 4.7 rebounds and 3.5 assists per game last season for Wright State. He also shot 38.7 percent from behind the three-point line. Head Coach Brad Underwood ran a top-tier offense at Oklahoma State last season. It may take a while for that to be the case at Illinois. Until then, Alstork and company will have to get Illini fans by.

The Indiana Hoosiers are trying their best to get back to contending for titles. Hiring Archie Miller during the offseason was the first step in that direction. In his six seasons as head coach of the Dayton Flyers, Miller coached his team to four NCAA Tournament appearances, including a Sweet Sixteen appearance in 2014. Indiana has struggled on the recruiting trail as of late, but that shouldn’t hurt them too badly. Miller has shown that he knows how to win without the best players. The Hoosiers have experience returning, with upperclassmen Robert Johnson, Josh Newkirk and Juwan Morgan all on the roster. The bottom line is Indiana’s defense will have to be better. Giving up 78 points per game in conference play isn’t going to cut it. Expect Miller to intervene, and to see a much improved Hoosier squad this season.

Iowa missed out on the big dance last year, and it looks like this season could be much of the same. Head coach Fran McCaffery is dealing with a young team that shows lots of promise for the future. The Hawkeyes’ roster boasts only two seniors. One of the newcomers that could have an impact immediately is Luka Garza. Garza, a 6-foot-11 center, is the tallest player on Iowa’s roster. He was rated the 10th best center in the 2017 recruiting class by 247Sports. This could provide a new element to a team that averaged a +0.1 rebound margin last season. Sophomore Tyler Cook should be the main offensive force for the Iowa frontcourt, but watch for Garza to play quality minutes coming off the bench. 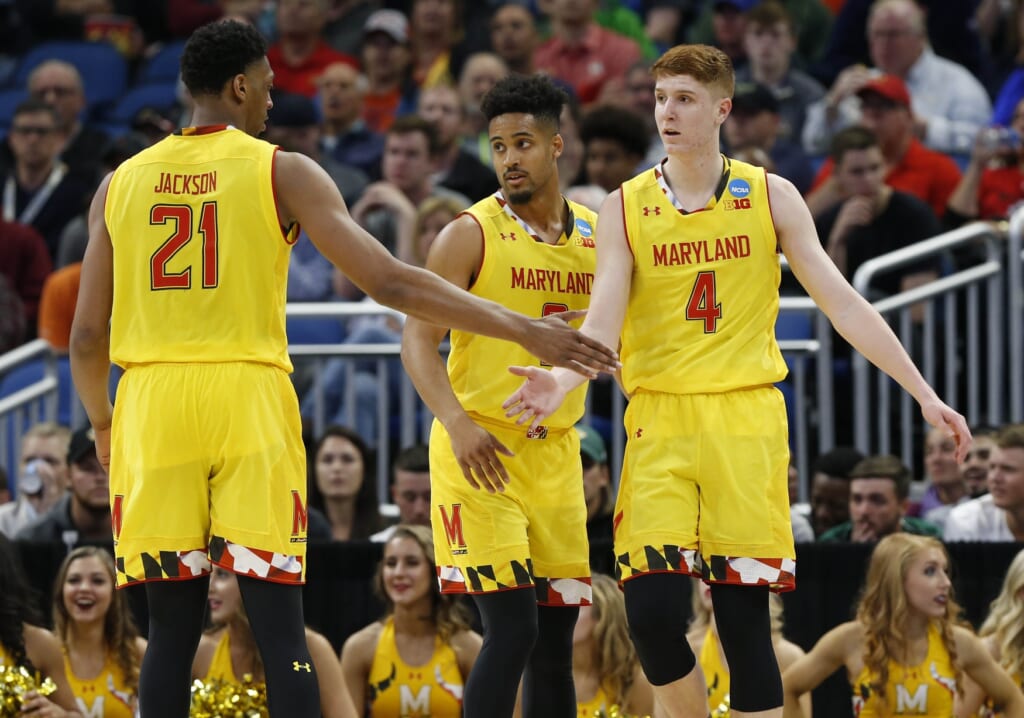 The Maryland Terrapins have managed to make three straight NCAA Tournaments, but this year they will have big shoes to fill. The Terps will be without Melo Trimble, their leading scorer for the past three seasons. While it’s unlikely Maryland has a guard that can replace Trimble’s explosiveness, there is a forward that could surpass his production. Justin Jackson showed tremendous potential during his freshman campaign. The 6-foot-7-inch Canadian was Maryland’s second-highest scorer last year with 10.5 points per game. Trimble averaged 16.8, but most of Jackson’s shooting percentages were better. Jackson shot 44 percent from behind the arc, 12 percent higher than Trimble. He also led the team in rebounds, pulling down six per game. Jackson is a jack of all trades, but will the talent around him be enough to excel? It will have to be if the Terps plan to make their fourth consecutive NCAA Tournament appearance.

D.J. Wilson was one of the most well-rounded athletes in last year’s NBA Draft. Anytime you lose a big man that can shoot the ball from anywhere on the court, it’s going to be hard replace him. Luckily for Michigan, they have a tremendous upside. They have Moritz Wagner. The 6-foot-11 forward averaged more points then Wilson last season. He also maintained a higher field goal and three-point percentage. Voted to the preseason All-Big Ten team, Wagner will be a vital key in the Wolverines’ success. Wilson wasn’t the only star that left, as Big Blue also lost its top two leading scorers from last season, Derrick Walton Jr. and Zak Irvin. There is a lot of hype surrounding incoming freshman guard Jordan Poole. Poole was ranked the 19th best shooting guard in the 2017 recruiting class by 247Sports. Will the young gun be able to replenish some of the depth that departed after last season? Veterans like Wagner, Muhammad-Ali Abdur-Rahkman, and Duncan Robinson are hoping that’s the case.

The Spartans suffered a down year last year. Fortunately for them, a down year ends with a NCAA appearance as a No. 9 seed. Expect to see a much improved ball club this season. The return of Mile Bridges is key for Tom Izzo’s team. The forward could have been drafted after an impressive freshman campaign, where he averaged 16.9 points and 8.3 rebounds per game. Instead, he opted to return for a second season. He’ll be an uncontainable force in the paint, however, he won’t be alone. He’ll have Nick Ward and Jaren Jackson Jr. for reinforcements. Ward averaged 13.9 points per game, and he led the team with 54 blocks last season. Jackson, on the other hand, is a 5-star recruit out of La Porte, Indiana. According to 247Sports, he is the no. 8 recruit in the country. Expect the 6-foot-11 freshman to have an impact immediately. No other team in the Big Ten should be able hang with this Michigan State front court.

Predictions: 1st in Big Ten, No. 1 seed in NCAA

The Golden Gophers scored their first NCAA Tournament appearance since 2013 last season. Minnesota fans will be expecting a return to the big dance, as the team returns six of its top seven scorers. Four players, Amir Coffey, Nate Mason, Jordan Murphy and Dupree McBrayer, averaged double-digits in the scoring column last season. Murphy barely missed averaging a double-double on the year, with 11.3 points and 8.8 rebounds per game. Coffey and Mason are players to watch, as they were both named to the preseason All-Big Ten team. This team has so much talent that there’s simply not one definite X-factor. With guys like these sporting the maroon and gold, they could pose a big threat to Purdue and Michigan State.

Point guard Glynn Watson Jr. was more than productive for his team last season. He averaged 13 points per game while shooting 42 percent from the field. This year he’ll be working beside Georgetown transfer Isaac Copeland. A former top-25 recruit, Copeland showed flashes of potential with the Hoyas. He averaged 11.1 points per game during the 2015-16 season, and 5.4 in 2016-17. Copeland has been granted two years of eligibility with the Huskers, and he could be ready to wreak havoc alongside Watson. Don’t sleep on this duo.

The 2016-17 season was monumental for Northwestern. The Wildcats clinched their first-ever NCAA Tournament bid in program history and went on to get their first tournament victory over Vanderbilt in the round of 64. Expect the Wildcats to make back-to-back appearances in the big dance. Like Minnesota, they return nearly everybody. Point guard Bryant McIntosh was the team’s leading scorer with 14.8 points per game last season, but he was also its heart and soul. Look for his game to amplify this season, and for his team to find success through his production.

Like Indiana’s Archie Milller, Chris Holtmann was the right move for Ohio State. Who’s better for the job than a coach who led Butler to three consecutive NCAA Tournament appearances, including a Sweet Sixteen berth last season? Nobody. Holtmann inherited a mess in Columbus, but a 247Sports Top-25 recruiting class should be a good start for the rebuild. While the effects of Holtmann probably won’t be felt this year, there should be improvement. The Buckeyes could be a force to reckoned with in a few years. 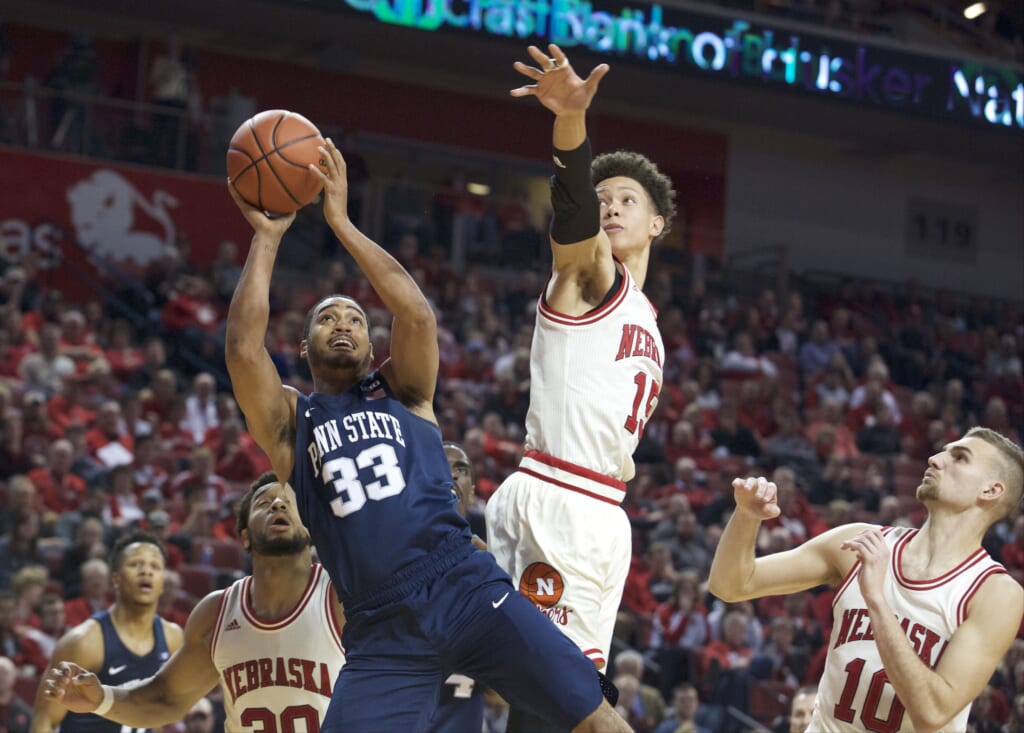 Although the Nittany Lions are returning three players that averaged double figures in points per game last year, they were outscored by opponents on the season. That shows there are adjustments that need to be made on both sides of the ball. Fans have been optimistic about the program in the past, but now frustration is beginning to set in. With doubt looming over the players’ heads, leadership is needed on the hardwood. Shep Garner could be that leader. Garner is one of only two seniors on the roster and has endured lots of disappointment throughout his career. The guard recently spoke with Penn State’s school newspaper, the Daily Collegian, to express his feelings on the upcoming season.

“You want to go out a winner,” Garner said. “You want to leave a program better than what it was when you came into it… Last year hurt…We win those games, we have a whole totally different season,” Garner said. “I think we were a couple possessions away from an NCAA Tournament berth. That’s the stuff that burns you the most.”

Garner and his team will need to remember those painful losses and channel them into motivation for the gauntlet that is Big Ten conference play.

Many are expecting a huge drop-off after the departure of Caleb Swanigan, but don’t be fooled. The Boilermakers return a lot of talent. One of those talents happens to be Isaac Haas. The 7-foot-2 senior was second in scoring with 12.6 points per game last season. That’s just 6 less than Swanigan averaged. Haas only played an average of 19.5 minutes per game to Swanigan’s 32.5. Purdue shouldn’t have anything to worry about when it comes to their back court. With Vincent Edwards, Carsen Edwards, and Dakota Mathias returning, the Boilermakers should have plenty of firepower on offense. The lineup may not be as dynamic without Swanigan, but it should be an experienced and reliable one.

Predictions: 2nd in Big Ten, No. 4 seed in NCAA

Is this the year the Scarlet Knights make some noise in the Big Ten? Probably not, but it will be a good measuring stick to see where Steve Pikiell’s program is in his second season. There wasn’t much for Rutgers fans to cheer about last season after going 3-15 in the conference. It will be interesting to see how some of the recruits Pikiell signed perform. Freshmen Souf Mensah, Myles Johnson and Geo Baker all have a chance to play, and they could possibly provide this team with a spark.

Wisconsin has never been a program for one-and-done athletes. The Badgers lost a lot of talent and experience to the NBA last season with the departure of veterans Bronson Koenig and Nigel Hayes. After 19 straight NCAA Tournament appearances, will Coach Greg Gard be able to lead them to another? Gard is in the third year of his tenure, and he has proven himself as a head coach. However, with Bo Ryan’s players graduating, it’s time for Gard to take the court with players he recruited himself. One of those players happens to be junior forward Ethan Happ. Happ averaged 14 points and 9 rebounds per game last season. While Happ is a bright spot, they’ll need young guards like D’Mitrik Trice to step up and find success if they want a chance at the Big Ten title. It looks like the Badgers could have a down year, but don’t overlook them. After all, it’s nearly impossible to recall the last time Wisconsin finished lower than fourth in the conference.

Predictions: 5th in Big Ten, No. 8 seed in NCAA