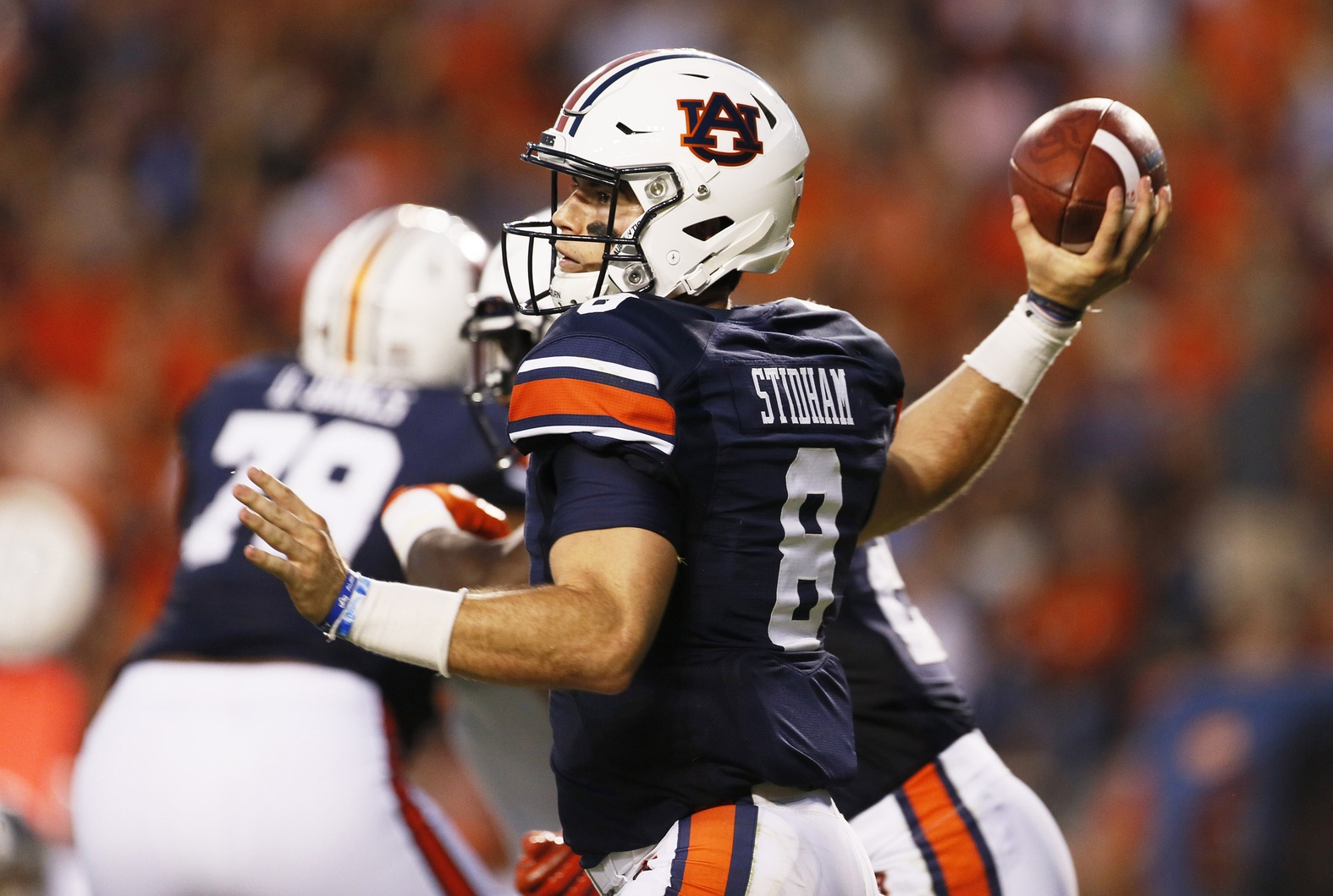 “Survive and advance” is a popular phrase during March Madness, but it also applies to the early portion of the college football season.

Many schools are just beginning their conference slate, and the matchups might not be spectacular. To compete for a division and league crown, though, navigating past every opponent is crucial. Of the early conference contenders, these are the most important players in Week 5.

Very quietly, Alex Hornibrook recently played the best game of his young career. The southpaw competed 18-of-19 passes for 256 yards and four touchdowns in a 40-6 victory at BYU. And the only incompletion? Yeah, it was a drop. That’s an excellent sign for Wisconsin, which begins Big Ten action with a home contest against Northwestern. Pat Fitzgerald’s team is notoriously slow-starting, but the Wildcats usually snap out of the slump around this time. Hornibrook can stop that from happening if he’s even close to the form he displayed last time out.

The carousel continues for the Gators, who are benching redshirt freshman Feleipe Franks and turning to former starter Luke Del Rio. Head coach Jim McElwain confirmed the news, per Ryan Young of SEC Country. So, after escaping the last two matchups, Florida will rely on someone who is averaging less than seven yards per attempt in his career. Vanderbilt, meanwhile, has surrendered just 4.4 yards per pass this season and intercepted five balls. The Gators will need a couple of methodical scoring drives from Del Rio to outlast the Commodores and survive at home. Miami and Virginia Tech are expected to battle for first in the Coastal Division, but Georgia Tech is safely in the next tier. Staying there means avoiding losses to below-average teams, and North Carolina fits that criteria this year. The 1-3 Tar Heels have already lost ACC games to Louisville and Duke. In those matchups, they surrendered a total of 27 first downs on the ground. That accounts for 71.1 percent of UNC’s first downs allowed via the running game, and Georgia Tech will continually pound the football. KirVonte Benson, the B-back, will handle a high volume of carries for the Jackets. Converting short-yardage opportunities is critical to staving off an upset.

A season-opening loss to South Carolina brought the hype train to a screeching halt, but North Carolina State has rebounded well and notched three straight victories. Last week, Ryan Finley threw for 230 yards and two scores to guide the Wolfpack past Florida State on the road. Suddenly, NC State is back in the ACC picture. But it’s entirely possible Dave Doeren’s squad is bounced from contention before what could be a make-or-break home game against Clemson in early November. Although Syracuse isn’t great, the Orange upset Virginia Tech last year and stuck with LSU in Week 4. Finley must lead NC State through the pesky ACC opponent.

Penn State would’ve fallen at Iowa had Saquon Barkley, the best player in college football, not saved the team. The all-purpose superstar amassed 358 all-purpose yards, highlighted by 211 on the ground. He also caught 12 passes for 94 yards. Barkley and Co. will return to a comfortable environment this week, though Indiana won’t be a friendly guest. The Hoosiers are ranked 100th in total defense, but they’ve ceded only 5.2 yards per play. In other words, pace hasn’t been friendly to Indiana despite reasonably effective defense. This is the type of contest where Barkley needs to take over when the opponent is worn down late.

Thanks to a reliable running game and tenacious defense, Jake Fromm finds himself in a “just don’t screw this up” position. The freshman quarterback has done a wonderful job since taking over for an injured Jacob Eason, completing 62.3 percent of his 69 attempts for 650 yards, seven touchdowns and one interception. Nearly half of Fromm’s completions have resulted in a first down, and 10 have covered at least 25 yards. Given the likely struggles of Tennessee’s offense against the Bulldogs, they should leave Knoxville with a victory as long as Fromm avoids a couple of disastrous turnovers. Through four weeks, nobody has stopped Bryce Love from running wild. He sliced Rice for 180 yards, USC for 160, San Diego State for 184 and UCLA for 263, scoring five touchdowns and setting up several more for Cameron Scarlett along the way. Love will try to continue the hot streak when Stanford hosts Arizona State, which managed to contain Oregon in a surprising upset last week. The Sun Devils gave up a meager 120 rushing yards to the dynamic, deep Ducks backfield. But just three weeks ago, San Diego State star Rashaad Penny scorched ASU for 216 yards. Love should similarly burn the Sun Devils.

Over the last two weeks, Jarrett Stidham has completed 45 of his 54 passes for 10.8 yards per attempt. That blend of efficiency and production is paramount to knocking off Mississippi State, especially since the visitors should be motivated following a drubbing at Georgia. Additionally, Auburn might need to patiently work the ball up the field. Stidham hasn’t connected on many down-field shots, a dynamic most expected him to provide the offense. Plus, the Bulldogs have only surrendered five passes of 25-plus yards this season. If slow and steady wins the race, Stidham must be precise, too.

The showdown between Memphis and UCF is arguably the season’s most important American Athletic Conference tilt that doesn’t involve South Florida. And it’s likely Memphis will need to win a shootout, since the defense has allowed at least 29 points in each game so far. The burden to atone for the shaky unit falls on Riley Ferguson, who shredded UCLA for 398 yards and six touchdowns. Ferguson must overcome a Central Florida defense that held FIU and Maryland to 6.0 yards per attempt. However, neither opponent had a quarterback like Ferguson. He’ll be the difference in the outcome, whether positive or negative for the Tigers.

Last season, Air Force ranked 20th nationally with 22 gains of 40-plus yards. Considering the style of offense, that was an impressive accomplishment. Explosiveness simply hasn’t been a part of the 2017 team, though Tim McVey is a proven option in that department. He’s totaled 15 runs of 20-plus yards and 11 receptions of 25-plus yards while with the Falcons. McVey, who also returns kickoffs, needs to have a large role on offense against a New Mexico team that is average at big-play prevention. Air Force cannot afford another loss in Mountain West action. Get the playmaker the ball. Clemson is one victory away from successfully navigating a September gauntlet. The final opponent, Virginia Tech, will be relentless. Defensive coordinator Bud Foster is known for his aggressive mentality, so Clemson quarterback Kelly Bryant must be ready to handle regular pressure from the Hokies. But he can also capitalize on Tech’s desire to disrupt plays in the backfield in two important ways. First, Bryant has displayed excellent touch on downfield passes. He and Deon Cain could have a huge day. And second, making the proper choice on zone-reads may be the difference between a negative play and a gain of 15. Bryant will be in a high-pressure spot Saturday night.

Although losing to TCU stung Oklahoma State, the program’s Big 12 and national championship aspirations are still alive. The only change is the Cowboys no longer have a margin for error. Mason Rudolph excelled during OSU’s first three games of the campaign, but he tossed two interceptions in the 44-31 shortcoming last week. He needs to spark the bounce-back performance for the Pokes, whose defense may struggle Saturday night since Texas Tech has a similarly powerful scoring attack. In 2016, Oklahoma State nipped the Red Raiders 45-44 thanks to a missed extra point. Rudolph can ensure this finish is considerably less interesting.

Did you know Calvin Ridley is the lone player averaging more than two receptions per game for Alabama? Yes, the Crimson Tide haven’t needed to throw often because the running game has been so effective, but that’s still a bizarre fact. While Alabama should be successful on the ground against Ole Miss, Jalen Hurts might actually need to throw a few important passes. And you can be certain he’ll be looking for Ridley, who leads the Tide with 20 catches, 262 yards and two touchdowns. If the Rebels can’t stack eight in the box because of the NFL-caliber wideout, Alabama will cruise to an SEC win.

UCLA’s defense has allowed the 10th-most yards per play, ranks seventh-worst in total defense and sixth-worst in points per game. Translation? “Save us, Josh Rosen.” The NFL prospect has done a respectable job, throwing for 1,763 yards and 16 touchdowns while helping the Bruins score 45 points per contest. Rosen has made several questionable decisions that also hurt UCLA’s chances to win, so he’s not blameless here. But in a matchup with Colorado — a team with a solid defense but questionable offense — Rosen has the ability to propel the Bruins by himself. Even if it takes 45 points.

Oregon, despite its loss to Arizona State, will be an excellent test of how seriously we should be taking Cal’s run defense. The Golden Bears — who had the country’s third-worst run-stopping unit last year — held Ole Miss to 1.8 yards per carry and limited USC to a mere 3.5. They’ll be trying to stop Royce Freeman. He posted at least 150 yards in each of the Ducks’ opening three games before penalties forced the Ducks into passing situations last week. His average stayed consistently, but his streak of 150-yard performances ended at three. Freeman should handle a heavy workload Saturday night and show whether Cal’s improvements are for real.