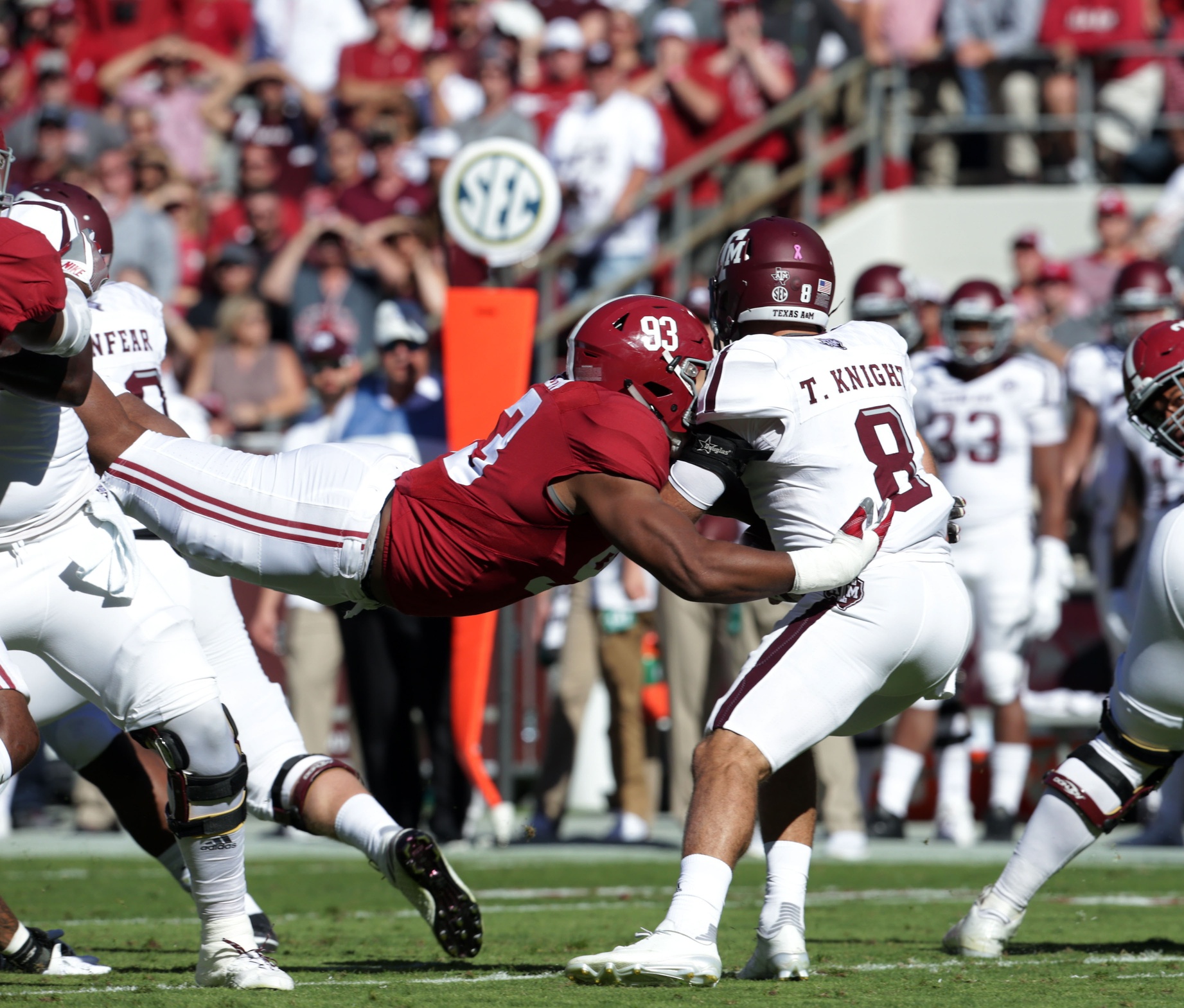 For football fans, the final days before the 2017 NFL Draft will pass in the blink of an eye. But NFL scouts, general managers and coaches are hitting the home stretch of their draft preparation — where every minute can seem like a lifetime.

Especially when considering picks taken in the first few rounds, NFL franchises have the opportunity to completely change their fortunes depending on who they draft, either in a good or bad way.

Sure, most rookies need time to adjust to life and the level of play in the NFL.

Others are ready to come in right away and take the league by storm. These 10 players fit that bill. 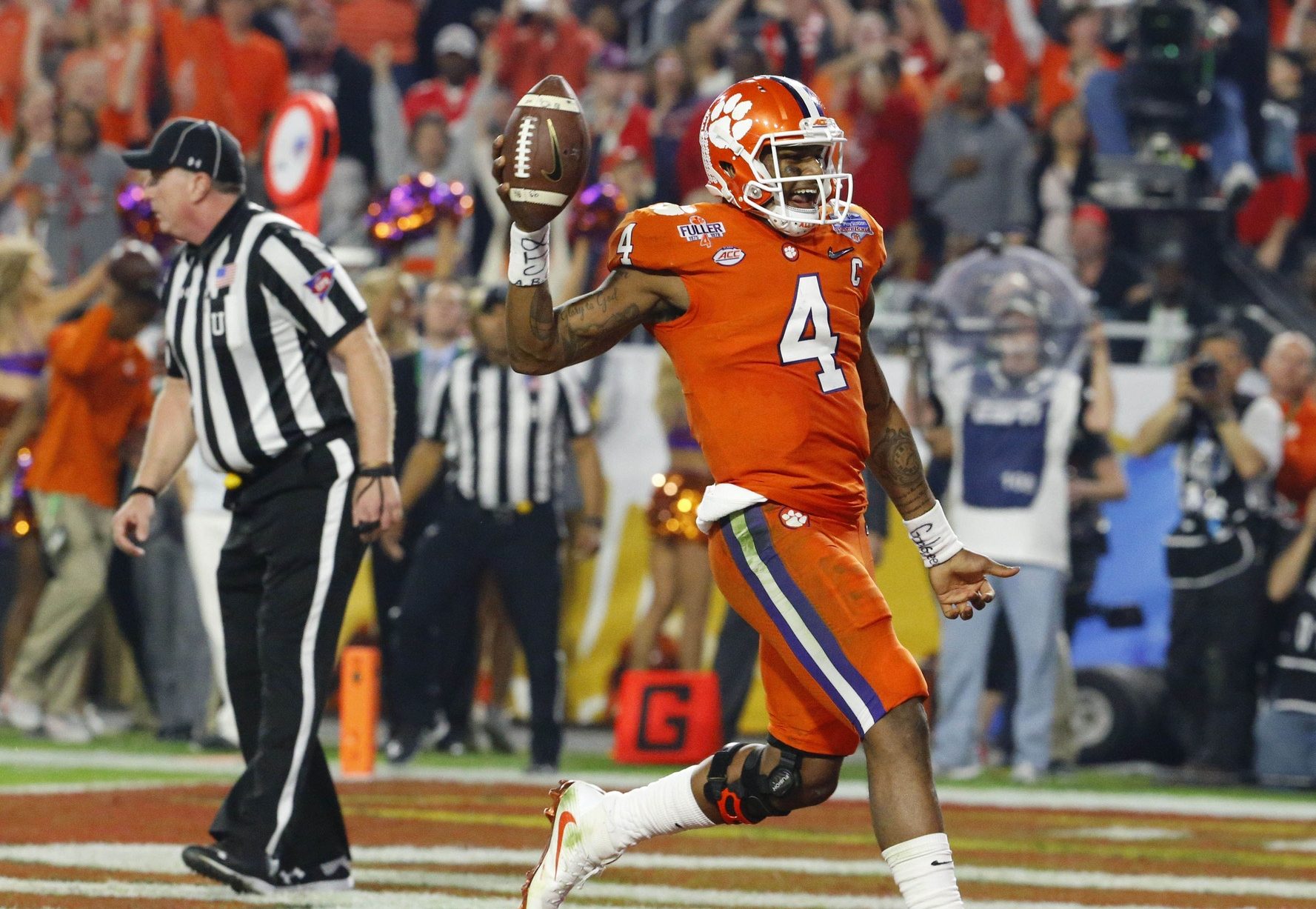 Great NFL quarterbacks have an X-factor. It’s hard to describe precisely, but you know it when you see it. Think Tom Brady or Aaron Rodgers. They may not be the best athletes in the NFL — though Rodgers is certainly a great athlete — but they just find a way to win games.

Watson has that X-factor teams look for in a championship quarterback. On top of that, he’s a tremendous athlete. He can make plays with his arm, but he’s also more than able to tuck the football and run for a first down or more. The zone-read scheme isn’t as popular in the NFL as it is in college, but a smart head coach can find a way to use Watson’s talents. Just look at how Cam Newton has thrived as a passer and a runner at quarterback. Watson has that same potential, though he his significantly smaller.

It goes back to that X-factor with Watson, though. He’s a leader and people, even NFL veterans, will rally around. He has championship experience and the poise to translate that to the NFL in his rookie campaign.

He may not be the “best” overall quarterback in the draft, but he certainly has the most potential to lead a franchise to greatness. 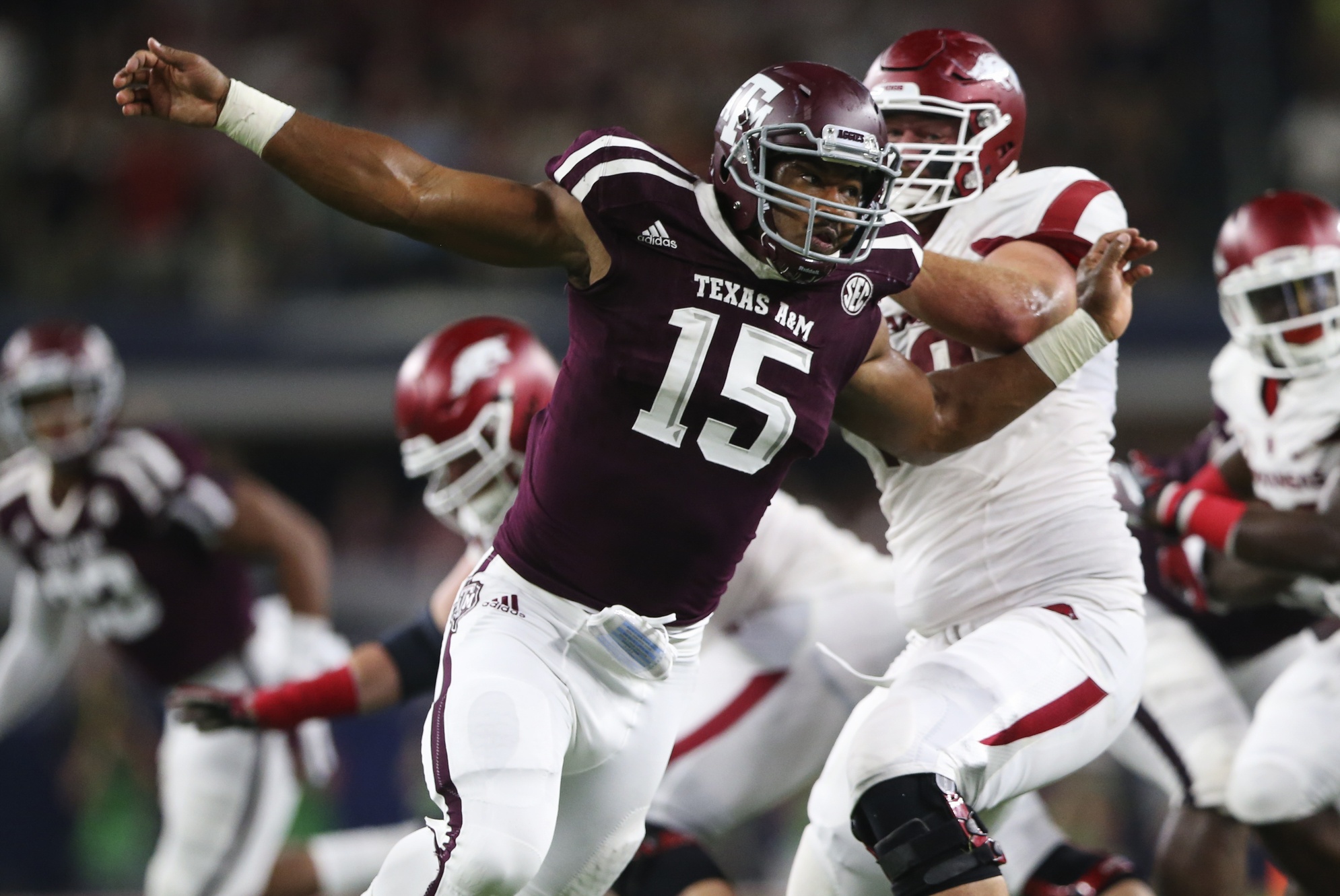 As a potential No. 1 overall pick, Garrett is a shoo-in for this list. He played defensive end at Texas A&M but could make his biggest impact as a 3-4 EDGE rusher in the NFL. He has the speed and athleticism of Von Miller (without Miller’s otherworldly quickness) and much of the same potential coming off the edge.

In three seasons for the Aggies, Garrett totaled 141 tackles (81 solo), 47 tackles for loss, 31 sacks, seven forced fumbles and even one interception. He’s the total package on the edge, with the size to hold up in the run game and the elite speed to dip his shoulder and ruin a quarterback’s day (watch here).

He has defensive MVP potential and is easily on the watch list for Defensive Rookie of the Year in 2017. 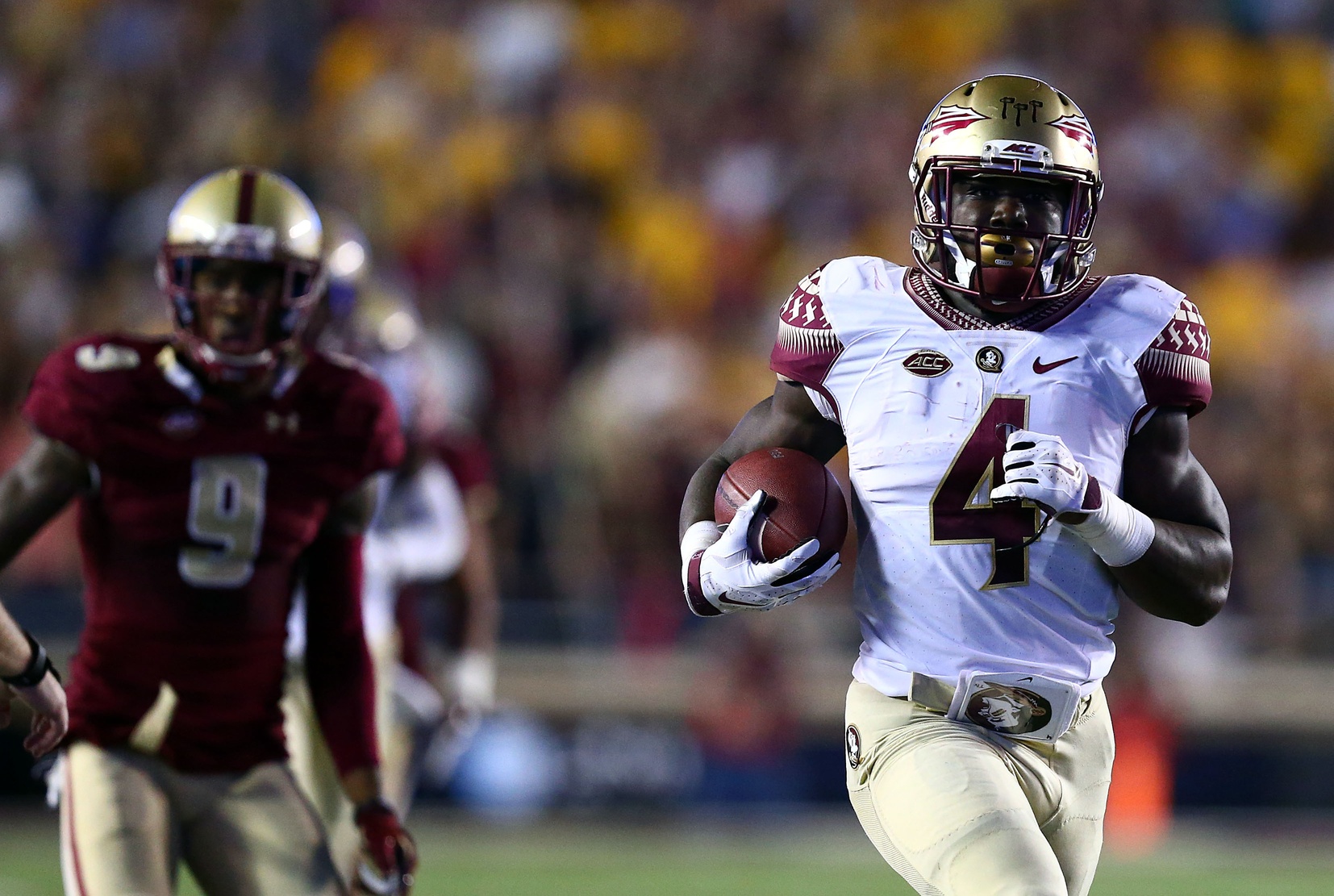 Dalvin Cook is in a heated battle for the title of top running back in this draft class, competing with LSU’s NFL-ready superstar Leonard Fournette and Christian McCaffrey.

The one thing that could hold Fournette back in the NFL, though, is his extensive history with injury. He’s a physical runner who has had a hard time staying healthy in college, thus there is some risk associated with drafting him.

In Cook, a lucky NFL team will get the same physicality and arguably even more athleticism. In three seasons at Florida State, he notched 687 rushing attempts for a total of 4,464 yards and 46 touchdowns. Cook can also make an impact in the passing game. He caught 79 receptions for the Seminoles, turning those catches into 935 yards and two receiving touchdowns.

Cook is explosive, shifty and powerful. He ran a 4.49 40-yard dash at the NFL combine and put up 22 reps on the bench press. He can carry a team on his back and he’s more than ready for the NFL at a stout and muscular 5-foot-10, 210 pounds. 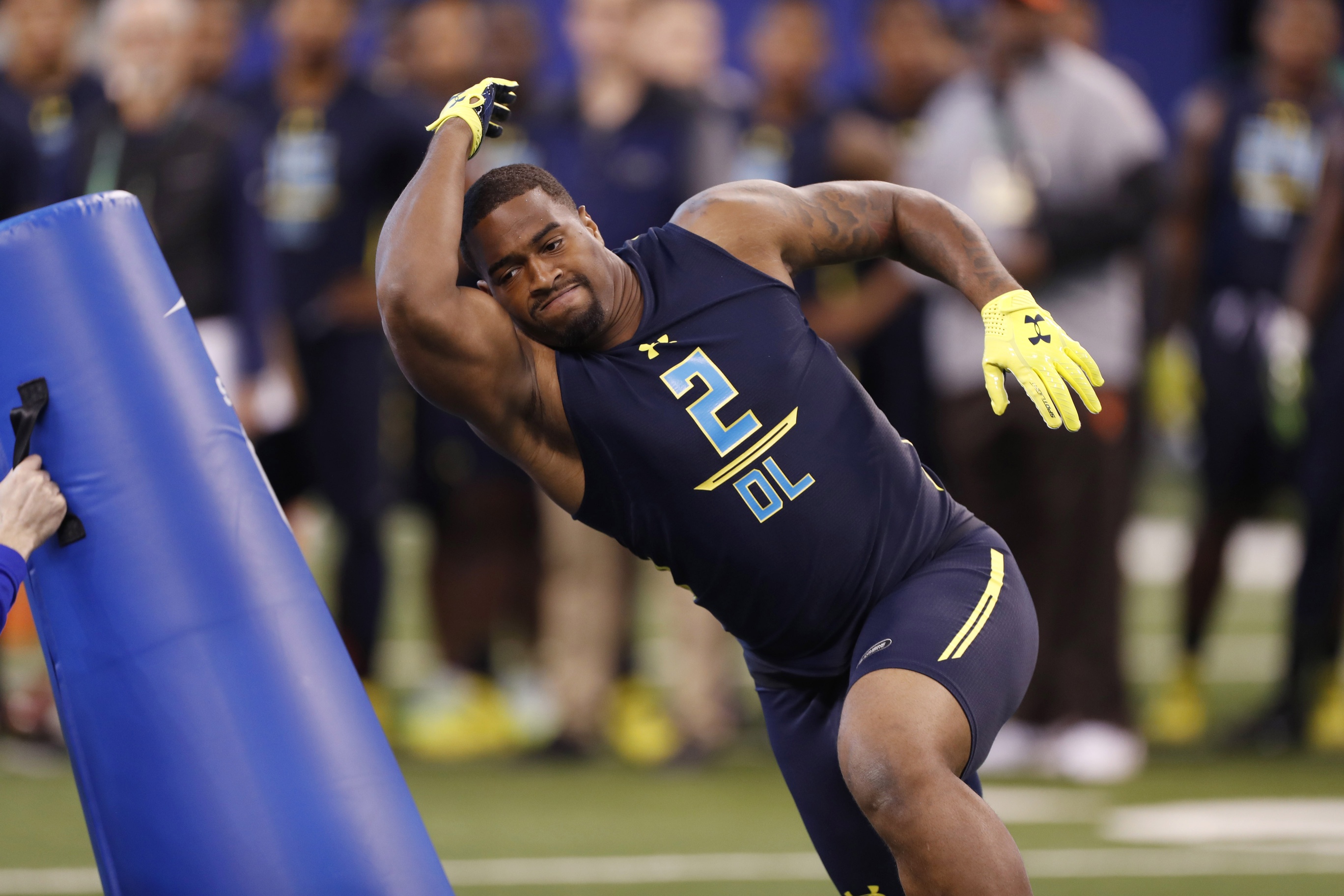 When discussing NFL-ready defensive lineman in this draft, Alabama’s Jonathan Allen is head and shoulders above the rest.

In 2016, he won the Chick Bednarik and Bronco Nagurski Award, leading Alabama’s elite defense by notching 69 tackles, 16 tackles for loss and a team-high 10.5 sacks. This was from a defensive lineman spot in a 3-4 scheme mind you, where double-teams are commonplace.

Allen can do it all as a defensive lineman. He can play on the inside and burst through the gap to make a play in the backfield, or he can line up on the edge and use his speed and athleticism to get after the quarterback or close on a runner.

He’s an elite athlete who checks in at 6-foot-3, 286 pounds. He has the strength of a much bigger defensive tackle and the speed of a pass-rushing defensive end. 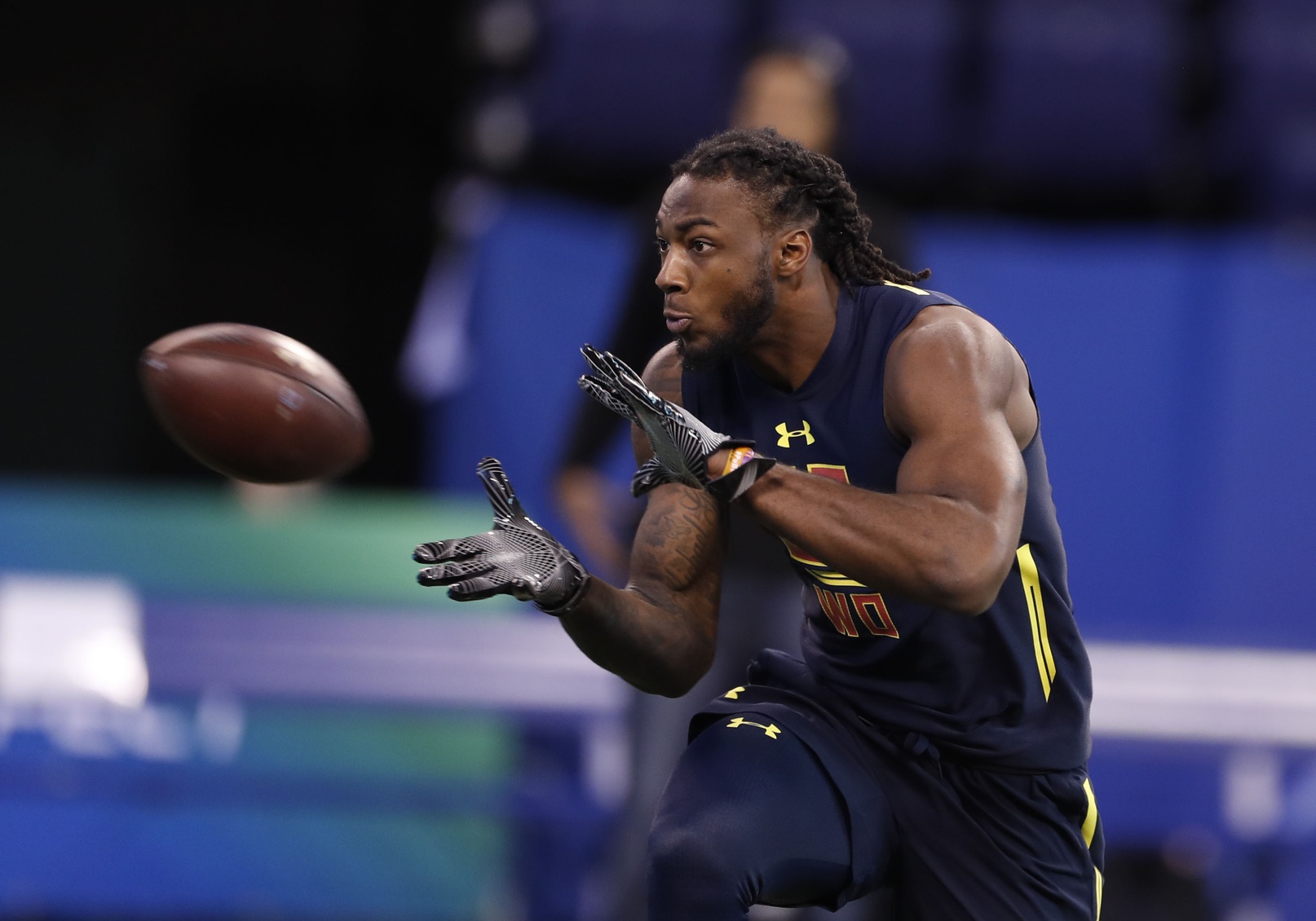 The second Clemson player on this list, Williams is certainly deserving. He has two of the three things NFL scouts covet in wide receivers: Size and the ability to make big catches, just about anywhere on the field.

Williams is 6-foot-4, 218 pounds, so he’s going to dwarf many of the corners asked to cover him in the NFL. This will provide him an instantaneous advantage right from his rookie season. He has great hands, the ability to extend and go snag the football out of the air, and he’ll especially be popular as a red zone threat where he can use his size and long arms to score touchdowns.

Williams is also tough. He nearly broke his neck in Clemson’s 2015 season opener, causing him to miss the rest of that season. He came back strong in 2016, notching 98 receptions for 1,361 yards and 11 touchdowns in Clemson’s national championship season. 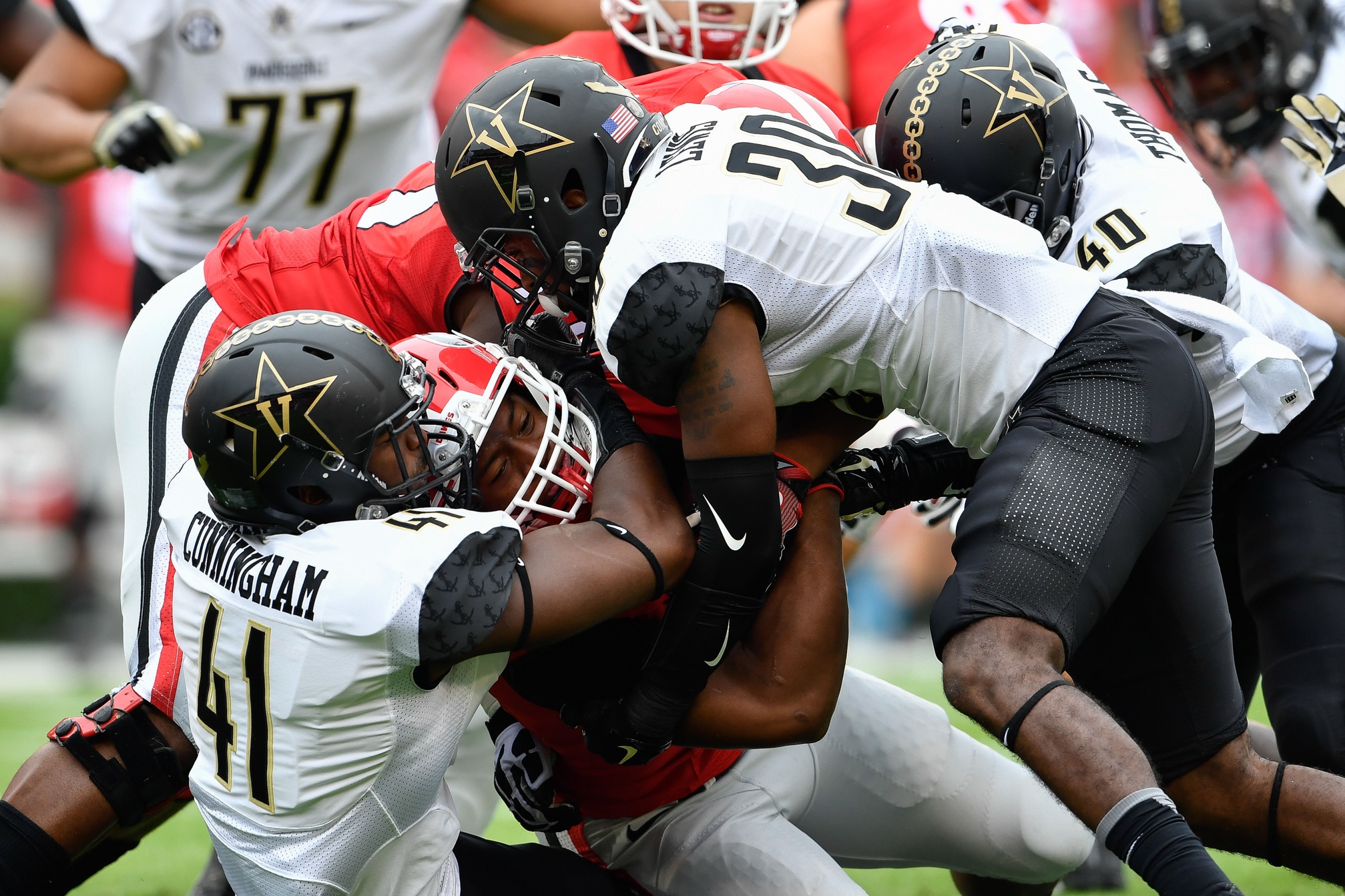 Zach Cunningham is the type of player you’d expect out of an elite inside linebacker and he deserves more respect that he’s been given.

He’s a straight-up playmaker who seems to have a nose for the ball and isn’t afraid to go downhill and make a play just about anywhere at the line of scrimmage. He can knife through gaps tackle-to-tackle and has the speed to get to the edge. That athleticism will also serve him well in pass coverage, so overall, he projects to be a three-down inside linebacker at the NFL level.

Cunningham was a first-team All-SEC linebacker and AP All-American in 2016, totaling 125 tackles and 16.5 tackles for loss. That was the follow-up to a 2015 season that saw him notch 88 tackles, 14 tackles for loss and 4.5 sacks in his first All-SEC campaign.

NFL tight ends have basically become glorified wide receivers in that they’re a bit bigger and stronger but are still asked to run crisp routes and make big plays in the passing game. Sure, there are still a handful of run-block specialist tight ends in the NFL, but the true game-changers are getting it done downfield.

And that’s exactly what David Njoku brings to the table. He’s a big, athletic tight end at 6-foot-4, 246 pounds who is just as comfortable running routes as he is setting the edge as a blocker. He can beat a defense over the top with his speed and size but is also athletic enough to take a shorter route and turn it into a big play with his feet and ability to make defenders bounce off of him.

David Njoku's elite athleticism is unmistakable on film. He is neck & neck with Jordan Leggett for the top TE in the #nfldraft pic.twitter.com/yvoGgbGeir

In just two seasons of play at Miami, he totaled 64 receptions for 1,060 yards and nine touchdowns. All but one of those touchdowns came during the 2016 season. 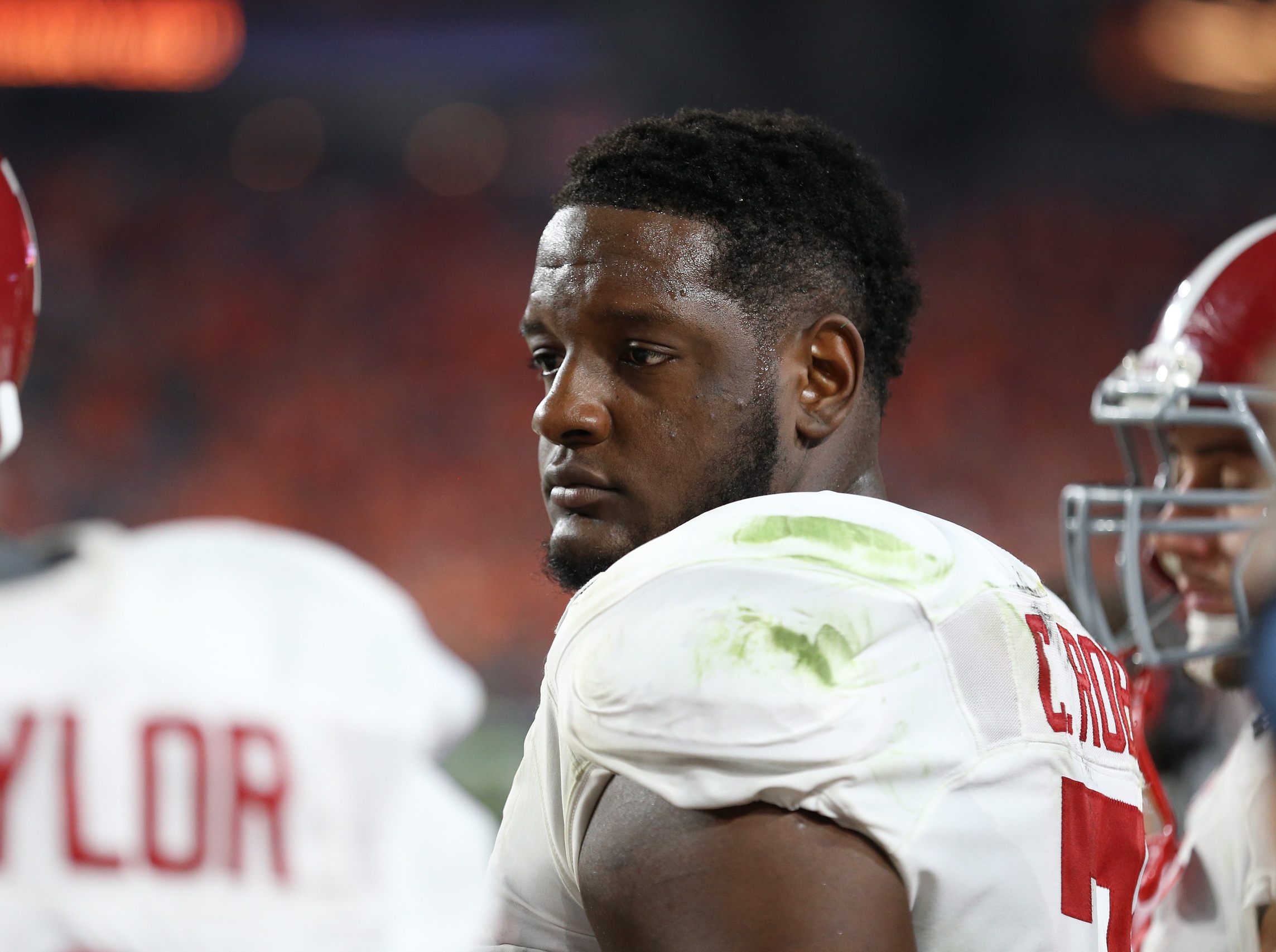 Cam Robinson looks like he was made to play NFL football at 6-foot-6, 322 pounds. He also has the experience at Alabama that suggests he can come into the league from day one and be a starter at either right or left tackle.

Robinson’s size is obviously his main asset, but along with it comes the strength to set the edge. He uses leverage well as a blocker, and speaking of blocking, considering how big he is and the speed he’s had to go up against in the SEC — he’s a well above average pass blocker. He has quick feet and is comfortable on an island.

Will there be some growing pains against professional pass-rushers? Sure. With that said, Robinson easily has the tools and experience to learn quickly and be a star offensive tackle for years to come.

He started every single game of his four-year Alabama career on the blind side.

Adoree’ Jackson was arguably the best athlete in college football during his three seasons at USC. He enters the NFL as an explosive playmaker who can put up highlights from day one in the league.

To show you the type of momentum he’s riding heading into the draft, consider this: Five of his interceptions came during USC’s 2016 Rose Bowl-winning season. He also broke up 11 passes as a junior to go along with four special teams returns taken back for touchdowns.

Over his three seasons at USC, he returned four kickoffs for touchdowns and four punts as well.

Jackson can come into the NFL from day one and be a starting cornerback, kick returner and he can even play offense at a high level. He caught three touchdowns for USC during his freshman season and two in 2015. Last season for the Trojans, he caught two receptions for 76 yards and one score. 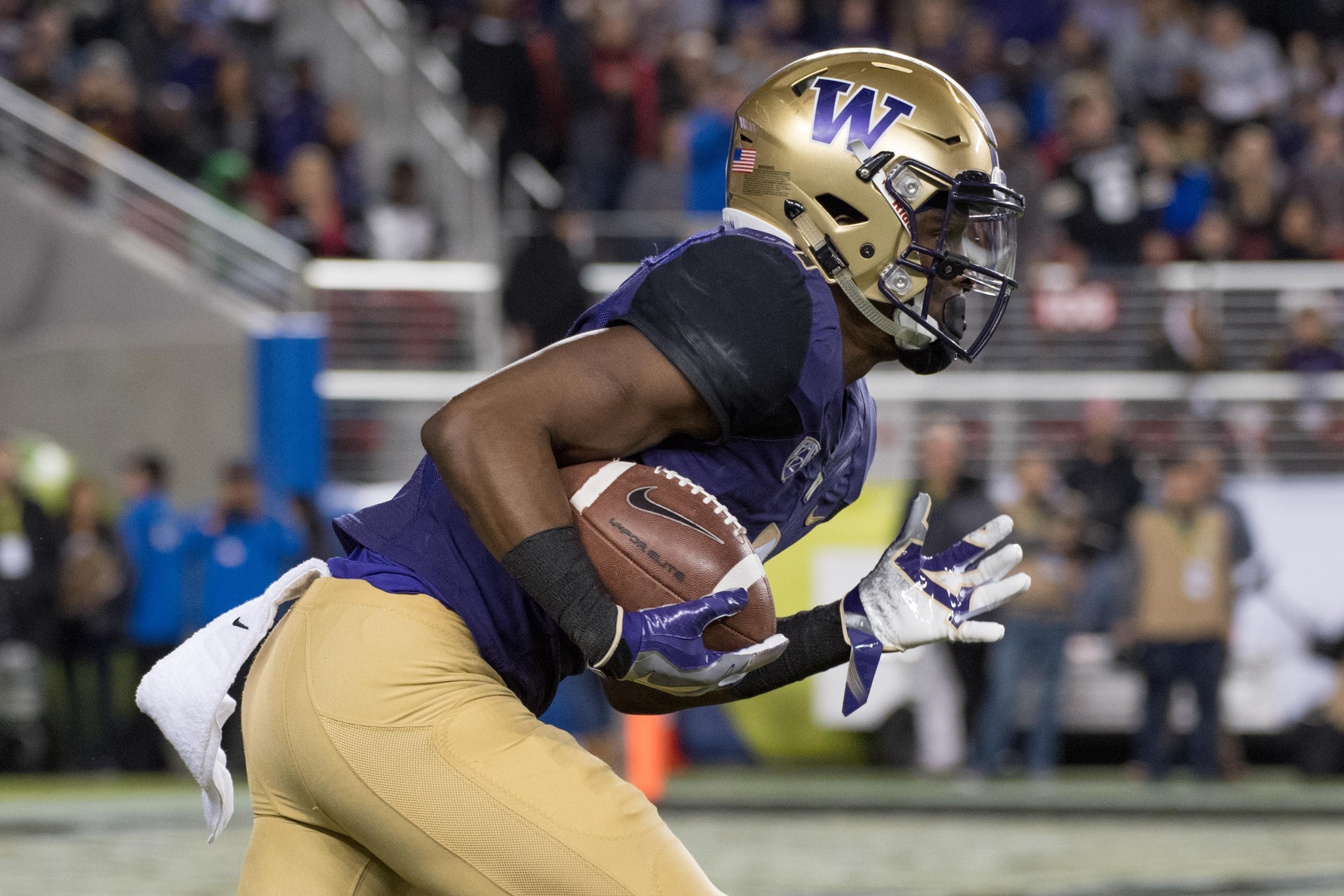 Even Bill Belichick can’t teach speed, and that’s exactly what Washington’s John Ross brings to the table in this NFL Draft.

Ross is a straight-up burner who will leave NFL cornerbacks in the dust going up top, but he compliments his speed with dynamite route running, solid hands and the ability to go make plays downfield.

He’s a playmaker and a potential superstar in the NFL.