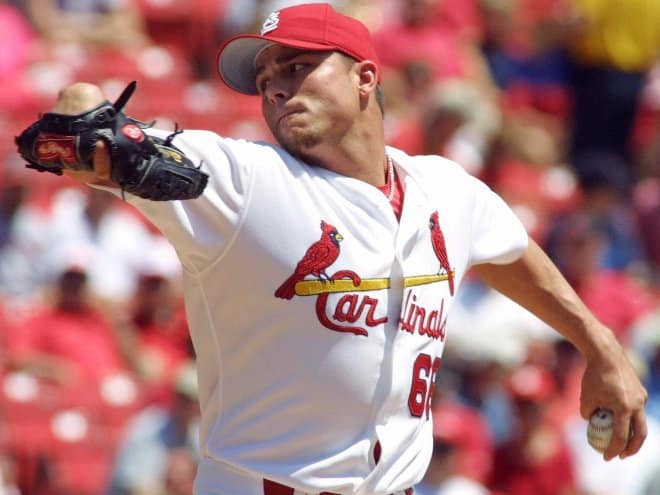 Former St. Louis Cardinals’ pitcher Rick Ankiel has one of the more bizarre stories in MLB history. The future of one of the game’s most promising pitchers came crashing down in an instant.

But after to his infamous start in Game 1 of the 2000 NLDS against the Atlanta Braves, Ankiel actually saw his meltdown coming. He had a remedy for it, too.

“Before that game…I’m scared to death. I know I have no chance,” Ankiel said in an interview on 590 The Fan in St. Louis. “Feeling the pressure of all that, right before the game I get a bottle of vodka. I just started drinking vodka. Low and behold, it kind of tamed the monster, and I was able to do what I wanted. I’m sitting on the bench feeling crazy I have to drink vodka to pitch through this. It worked for that game. (I had never drank before a game before). It was one of those things like the yipps, the monster, the disease…it didn’t fight fair so I felt like I wasn’t going to fight fair either.”

In 2001, he issued more than one walk per inning. Obviously, having to pitch with a buzz (or worse) is not a long term solution and from the sounds of things, Ankiel knew it.

The one saving grace for Ankiel was his hitting ability. Following 2001, Ankiel’s pitching career was essentially over. He appeared briefly as a reliever for the Cardinals in 2004. But in 2007, Ankiel was back in the majors as an outfielder. He ended up having a decent career, hitting 76 home runs, including 25 in 2008. Ankiel last played in the majors in 2013.

Certainly there have been better players than Ankiel. Still, few have had more interesting careers. He started off as a power pitcher with seemingly limitless promise. In an instant, he went from having no apparent ceiling to no apparent floor. This all happened before Ankiel’s 22nd birthday. Then, with persistence, he had a solid career in an entirely different part of the game.

Few players can match that experience.