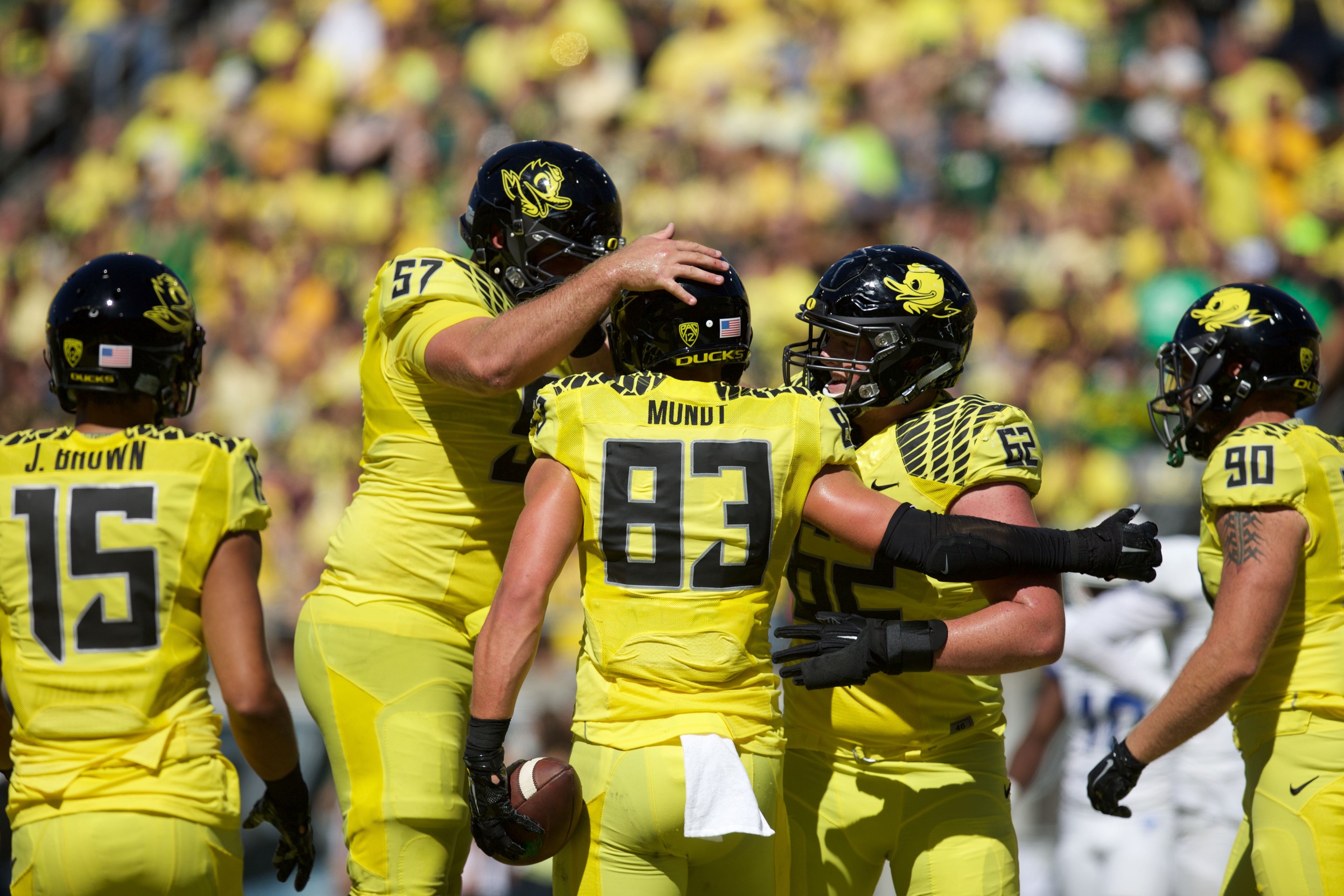 In alarming news out of Eugene, three Oregon Ducks football players were hospitalized following a series of grueling off-season workouts last week, per Andrew Greif of The Oregonian.

Poutasi and McCormick are both redshirt freshmen while Brenner is a redshirt senior.

According to Poutasi’s mother, Oloka, her son complained of very sore arms after the workouts and was subsequently diagnosed with rhabdomyolysis, a syndrome in which soft muscle tissue is broken down with “leakage into the blood stream of muscle contents,” according to the NCAA medical handbook.

Depending on the severity, it has the potential to lead to damaged kidneys.

While it isn’t confirmed what hospitalized the other two players, reports of multiple players within the same program being diagnosed with rhabdomyolysis is rare, happening only three times since 2010,

Players this week were required to finish the same workouts, which were described by multiple Oregonian sources as akin to military basic training.

Workouts included up to an hour of continuous push-ups and up-downs.

The sources said that some players “passed out” and others later complained of discolored urine, which is a common symptom of rhabdomyolysis.

According to The Oregonian, other players were tested and were found to have highly elevated levels of creatine kinase, another indicator of rhabdomyolysis.

Rhabdomyolysis can be triggered after a spike in intensity of an athlete’s workouts and by overexertion during those workouts, and with the Ducks fresh off a month-long dead period following the culmination of the 2016 season these workouts may have been far too much.

Oregon hired Irele Oderinde its new football strength and conditioning coach earlier this month, who followed Taggart from South Florida where Oderinde had worked as the school’s director of athletic performance since 2014.

Oderinde had gained a reputation for challenging and physical workouts while at South Florida, including having the team run upwards of 30 sprints following a grueling leg workout every Friday.

“The safety and welfare of all of our student-athletes is paramount in all that we do,” Oregon wrote in a statement on behalf of the entire athletic department. “While we cannot comment on the health of our individual students, we have implemented modifications as we transition back into full training to prevent further occurrences.

“We thank our medical staff and trainers for their continued monitoring of the students and we will continue to support our young men as they recover.”

The NCAA medical handbook listed “novel workouts or exercises immediately following a transitional period” such as a winter break as one of its 10 factors that can increase the risk of rhabdomyolysis.

It also cautioned that “all training programs should start slowly, build gradually, include adequate rest and allow for individual differences.”

With the shock of a new workout that left players passing out, it was clearly too much for a team that had previously been built on speed and athleticism rather than power and physicality.

Add in the month-long break in which players were left to their own devices in regards to staying in shape, and the fact that only one player has been confirmed with rhabdomyolysis is nothing short of amazing.

Oregon coach Willie Taggart visited Riverbend, Oregon to meet with some of the hospitalized players before leaving the state to recruit.

While Taggart has full faith in Oderinde, who has been in a strength and conditioning role of some sort since 2008 at Western Kentucky, it seems that his workouts would be better served being built up to rather then diving in full force.

ThRegardless, Taggart and Oderinde have a vision in place for the revival of the Oregon program, and seem to be well on their way to implementing said vision.