2017 Raiders Season at an Early Crossroads 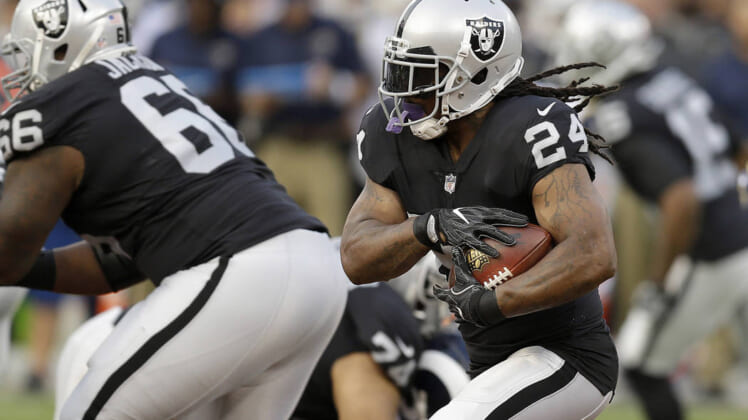 At 2-3, no one in Raider Nation is happy with the state of Raiders. This weekend’s game against the bumbling Chargers should prove the cure for that ails Oakland.

Here we are: the Raiders at the crossroads.

The Raiders season hasn’t started as many of us expected. If you listen to a good majority of Raider Nation, it’s time to blow this team and front office up.

That, of course, is ludicrous.

A Derek Carr injury, two losses, a stalled offense, and an overall lack of cohesiveness has led Oakland to this point. As they return home to face the lowly Los Angeles Chargers, the Raiders don’t have to sell their soul at this crossroads, but they do need to start finding their groove and playing up to their potential. The Chargers provide the perfect perennial loser to do just that.

How did we get here? What’s happened to a team many were picking to make the Super Bowl after this season?

It’s not a simple answer but there are a few areas of focus worth addressing to see why this team is in the midst of a three-game losing streak.

First, the defense everyone was worried about has played better than expected. Is it where everyone would like it to be, no. In two of the Raiders three losses, the defense has kept Oakland in the game. After finishing near the bottom of the league in team defense in 2016, the Raiders have made impressive improvement. Sure, there are still outages but the team has played better with a rash of injuries and group of young players. Oh, and first-round draft pick Gareon Conley continues to be hampered by an injury that’s kept him off the field.

Where the Raiders have most certainly struggled is on the offensive side of the ball. With a running game that looked much improved in the pre-season with the addition of Marshawn Lynch, it’s been unable to get on track at all this season. Lynch, who has looked powerful at times, also needs to lead the young Jelan Richard, DeAndre Washington to the promised land. The Raiders have built a Top 5 offensive line – there’s no excuse why the team can’t run. In fact, look for the Raiders to get it going this weekend against the Chargers, despite both Melvin Ingram and Joey Bosa (both solid pass rushers).

Then there’s Carr. After last year’s crushing injury in Week 16, Raiders fans have held their breath all pre-season and into the regular season crossing their fingers the franchise quarterback would not be knocked out again. The season for Carr started well with a 2-0 record, nice stats, and a dancing Lynch. Then Carr began to struggle. It’s hard to tell if it’s due to play calling or just a lack of cohesiveness, but Carr has looked a bit confused and off at times. The Raiders simply aren’t scoring through the air – and there is a correlation between a lack of running game and limited success in the passing game.

As if things weren’t bad enough, the team had to deal with  Carr’s injury in Week 5. What was first thought to be a minor injury, was later diagnosed as transverse process fracture. It was the Armageddon much of Raider Nation feared going into the 2017 season. Despite the injury, somehow, Carr is going to return after one week instead of the original 2-6 week time frame given last week. It remains to be seen whether or not Carr will go for sure. It’s a toss-up, really.

Coaches are always easy targets for fans when things are not going well for a team. If I had a dollar for every “Fire Coach A” or “Fire Coach B,” I’d be retired. Both Jack Del Rio and Defensive Coordinator Ken Norton, Jr., are the favorite targets. With the offensive struggles, OC Todd Downing is increasingly taking heat from fans frustrated with the struggles.

Have there been some questionable calls? Sure. That’s just not that unusual. More importantly, the coaches will have to get this team focused to reach its potential. I still believe the team lost focus during the big NFL protest during the third week. They need to find the focus again and get back to playing Raiders football.

Look for the Raiders to run over the Chargers this weekend – no matter where the game is played due to the horrific fires in Northern California. I predict a big day for Lynch/Richard and an average day for Carr, if he plays. If Carr doesn’t play, the game gets a little scary. It’s really a game the Raiders cannot lose. It may be early in the season, but losing to a 1-4 team at home could create more chemistry havoc for this club.

While many have lost faith in the Raiders front office and coaching staff, I have not. Some of the best coaching is done when your team faces challenges.

The Raiders are at the crossroads.