The Cleveland Cavaliers enter the Eastern Conference Finals having not lost a single game in the postseason with sweeps over both the Detroit Pistons and Atlanta Hawks.

They broke the single-game three-pointer mark with 25 in Game 2 against the Hawks, and have hit 62 over the past three games — also a record.

Despite this success, there’s a narrative out there that Cleveland will simply find itself in a position to lose in the NBA Finals for a second consecutive season.

And there’s a lot to that narrative.

After all, LeBron James and Co. will likely either be facing a 73-win Golden State Warriors team or a San Antonio Spurs squad that won 67 games during the regular season.

That’s a completely different ballgame than taking out inferior opponents with relative ease back east.

Though, there’s a lot more to this narrative that needs to be looked at in order to assess where Cleveland might stand against the best the NBA has to offer. 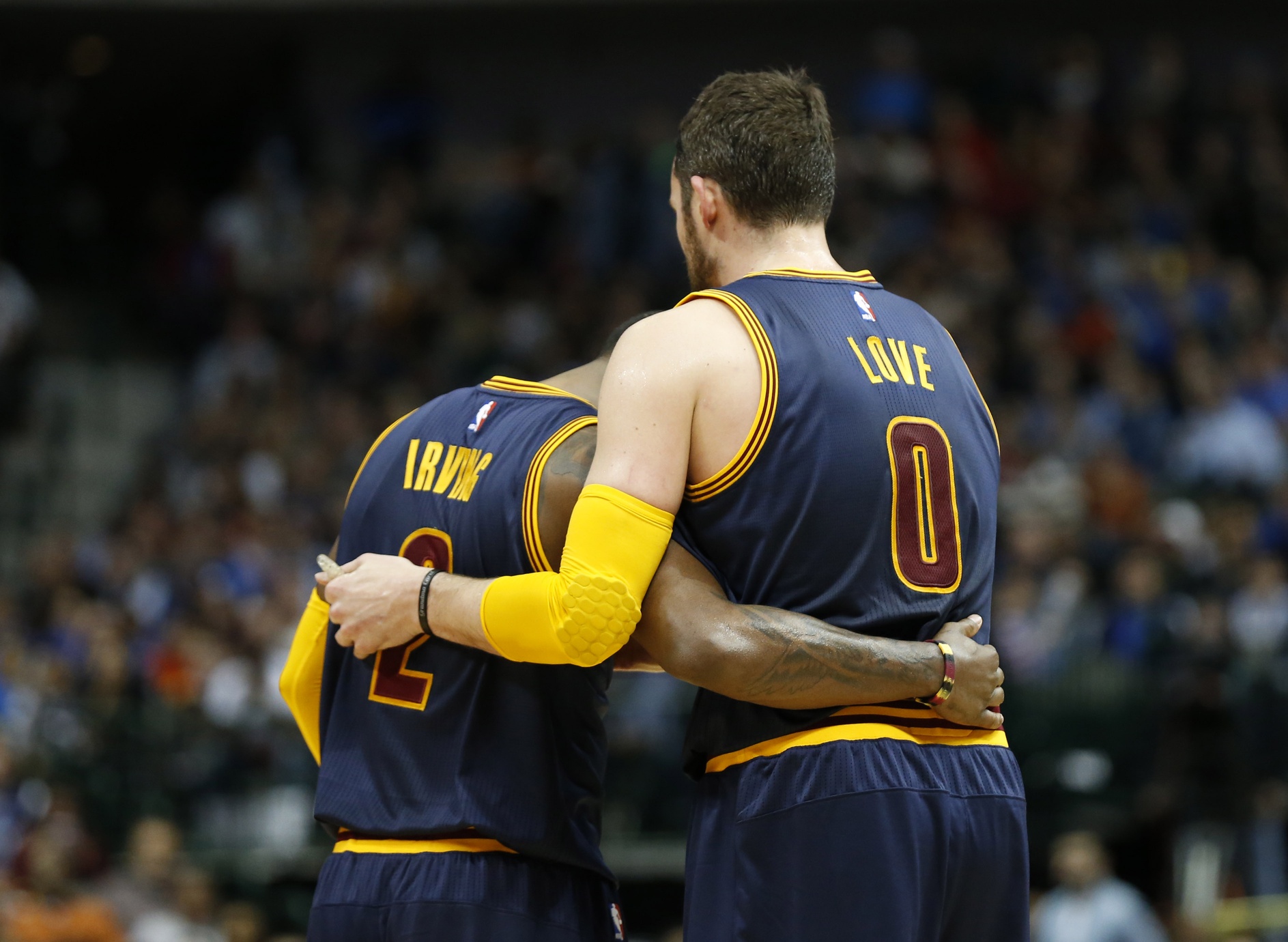 Instead of attempting to be something he isn’t, the former T’Wolves All-Star has found his niche behind the three-point line in Cleveland.

Love shot 4-of-31 (12.9 percent) on two-point shots during the Hawks series, finding his success behind the three-point line at a ridiculous 47.5 percent.

If the Cavaliers do end up making the Finals, Love’s matchup, presumably against either LaMarcus Aldridge or Draymond Green, wouldn’t be as appealing.

Aldridge is an inside threat on the offensive end of the court. Though, Gregg Popovich’s defensive scheme forces him out to the perimeter on defense when needed.

In Green, the Warriors have the best pure defensive four in the game. Green’s perimeter defense is right up there with Kawhi Leonard as the best in the Association.

He would have no problem running Love off the three-point line.

In fact, Love averaged 6.5 points while shooting 29 percent from the field, including a 1-of-8 mark from three-point land, in two games against the Warriors during the regular year. That’s a direct result of Green’s defense.

First off, you must have guys capable of hitting from the perimeter on a consistent basis. In Kevin Love, J.R. Smith and Channing Frye, the Cavaliers have just that.

Secondly, you must have the necessary spacing on offense to give these studs good looks from beyond the arc.

While David Blatt was tremendously successful as the Cavaliers’ head coach (83-40 record) prior to being fired during the middle of the 2015-16 season, his offensive scheme was somewhat limiting for the type of talent Cleveland boasts.

That has not been an issue under Tyronn Lue, who has made sure to let the players scheme the offense to the best of their talents. It’s a hands-off approach that’s helped big time here.

Despite boasting a 30-11 record prior to his firing, Cleveland put up 110-plus points just eight times in its first 41 games under Blatt. In the 41 regular season game after Lue took over, the Cavaliers tallied 110-plus points 19 times.

The correlation here? Spacing. This has been made possible by a small-ball lineup that rivals what the defending champs have done out in California.

The idea is to throw Love to the five and push James to the four. Having that power forward with elite-level passing ability (see Green in Oakland) is key to creating space in a regular lineup.

Pushing someone like James or last year’s NBA Finals MVP Andre Iguodala to the four makes this even more difficult to stop.

That’s created space out on the perimeter, especially when Cleveland runs its offense through Love at the five:

"NO! NO!" J.R. Smith cannot be stopped. pic.twitter.com/QG91KQmWMo

See how Love plays the role of distributor here? Because of his ability to shoot from the outside, the Hawks couldn’t solely focus on J.R. Smith, the end result being another three-point from the sharpshooter.

When the offense runs through James, it really is akin to what Steve Kerr has built in Oakland, an idea Kerr himself got while acting as an understudy to Gregg Popovich late in his career.

The focus here from Atlanta’s defense is on James’ driving ability. Considering he only hit eight threes in the four-game series, that philosophy makes sense.

Unfortunately, you need an elite-level wing defender to stop the drive and dish that we see above. Atlanta simply doesn’t have that.

Though, Toronto does possess that type of player in DeMarre Carroll, as do the Miami Heat with rookie Justise Winslow. It will definitely be interesting to see how the team that comes out on top in that series defends this spacing-centric offense.

If a team is hitting from the perimeter like Cleveland did against Atlanta, it’s going to be incredibly hard to defeat in a seven-game series.

Think of it this way. Cleveland hit 81 two pointers in the four-game sweep while nailing 77 three-point shots. It’s simple math. That’s an average of 57.8 points from beyond the arc. In comparison, the Cavaliers averaged just 40.5 points on two pointers in the series.

Can the Cavaliers sustain this moving forward in the playoffs? That’s the biggest question. We also won’t be able to answer it until the team takes to the court in the conference finals.

What we do know is that the sample size is really small here.

Even in Cleveland’s four-game sweep over the Pistons, it hit on 13 threes or less in the final three games of the series. This led to a much more competitive series than the sweep would indicate.

Unlike the Warriors and Spurs out west, Cleveland doesn’t have that low-post ability to make up for a lack of a three-point game when struggling from long distance.

Short of the team continuing at its red-hot clip (a real possibility), this other aspect of the game is going to have to pick up.

As to where Golden State’s top post-up player is its 6-foot-7 backup point guard, James represents Cleveland’s top player in that category. While he can excel in that aspect of the game, it wouldn’t be enough to fend off the Warriors or Spurs in a best of seven.

That’s where continuing their hot shooting from outside the arc comes into play. And let’s face reality here, Cleveland has been sizzling hot.

Cleveland became the first team in NBA history to hit 15-plus threes in four consecutive games, all wins against the Hawks. They made the most three-point field goals in a four-game series (77), besting the mark they themselves set in Round 1.

Equally as impressive, the Cavaliers almost set the record for most threes in a seven-game series, finishing just two behind the Hawks back in 2014.

In terms of the progression we’ve seen beyond the three-point arc, it’s absolutely stunning. Cleveland averaged 10.7 threes on 29.6 attempts during the regular season. In comparison, the team is averaging 19.3 threes on 38 attempts in its eight playoff games.

If the Cavaliers continue this hot shooting, it really won’t matter who they go up against, they are going to be hoisting the Larry O’Brien Trophy. The only question here is whether they can do that against better defenses, which brings us to our next point. 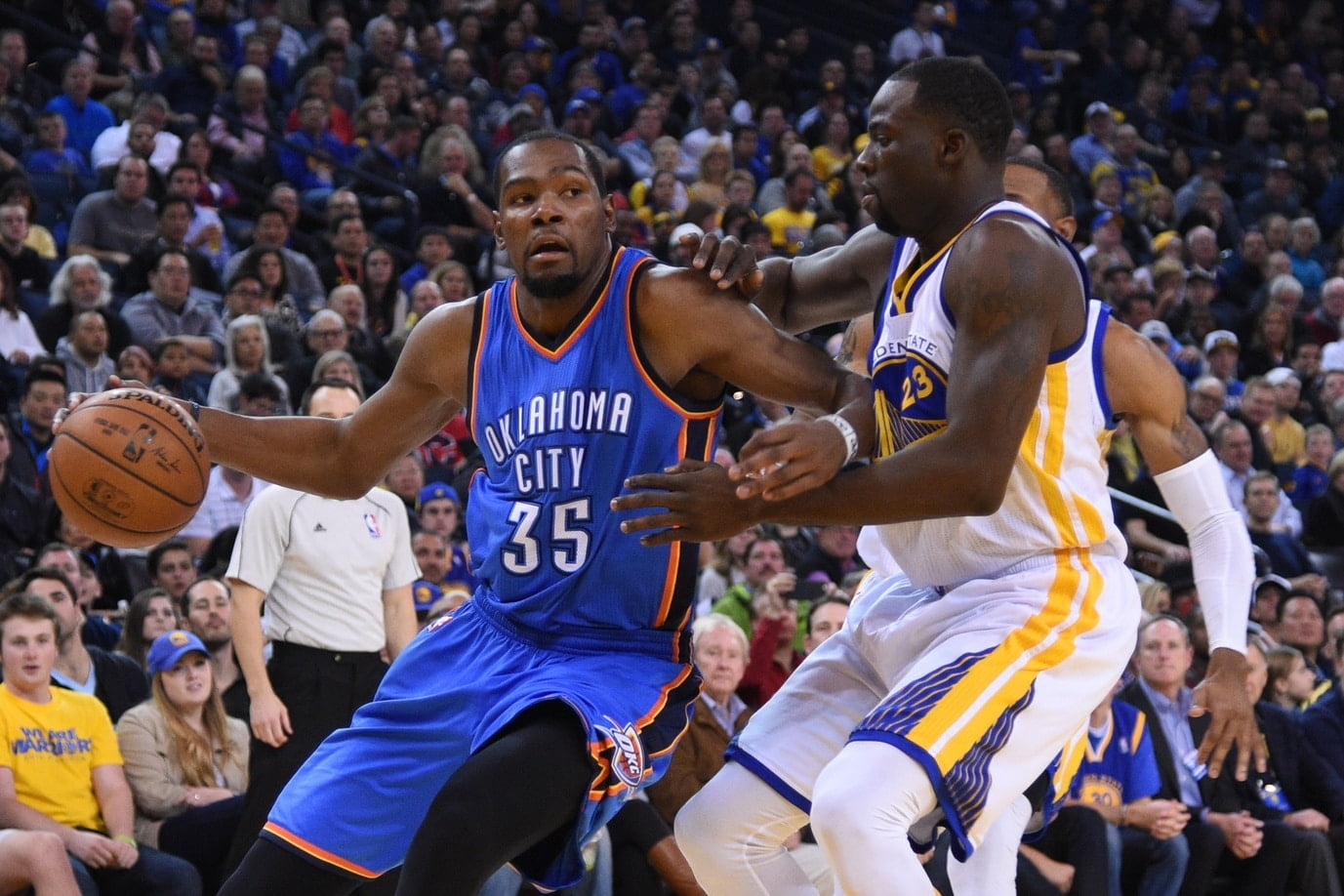 This is a staple of both the Spurs and Warriors out west. They have the ability to run opposing teams off the three-point line. For the Warriors, that comes in the form of three elite-level perimeter defenders in Klay Thompson, Green and Iguodala.

All three can lock down J.R. Smith and Channing Frye from outside. As it relates to Green, he has a proven track record (see above) against Love.

For San Antonio, that elite-level perimeter defense comes from two-time reigning Defensive Player of the Year Kawhi Leonard as well as Danny Green.

If whoever comes out on top out west, and assuming Cleveland earns the Eastern Conference title, this is going to be the biggest key for James and Co.

Can the Cavaliers bank on finding as many open outside shots against one of these two powerhouse teams? That’s a highly unlikely scenario.

So while everything seems hunky-dory in Cleveland, let’s preface this eight-game outburst by calling it what it is. Strong performances against inferior competition in a conference that’s been inferior to the west for years now.

This entire dynamic will change should Cleveland find itself in the NBA Finals for a second consecutive season.

In no way does that mean the Cavaliers stand no chance. Rather, it’s simply going to be a completely different monster than dominating in a watered-down Eastern Conference.