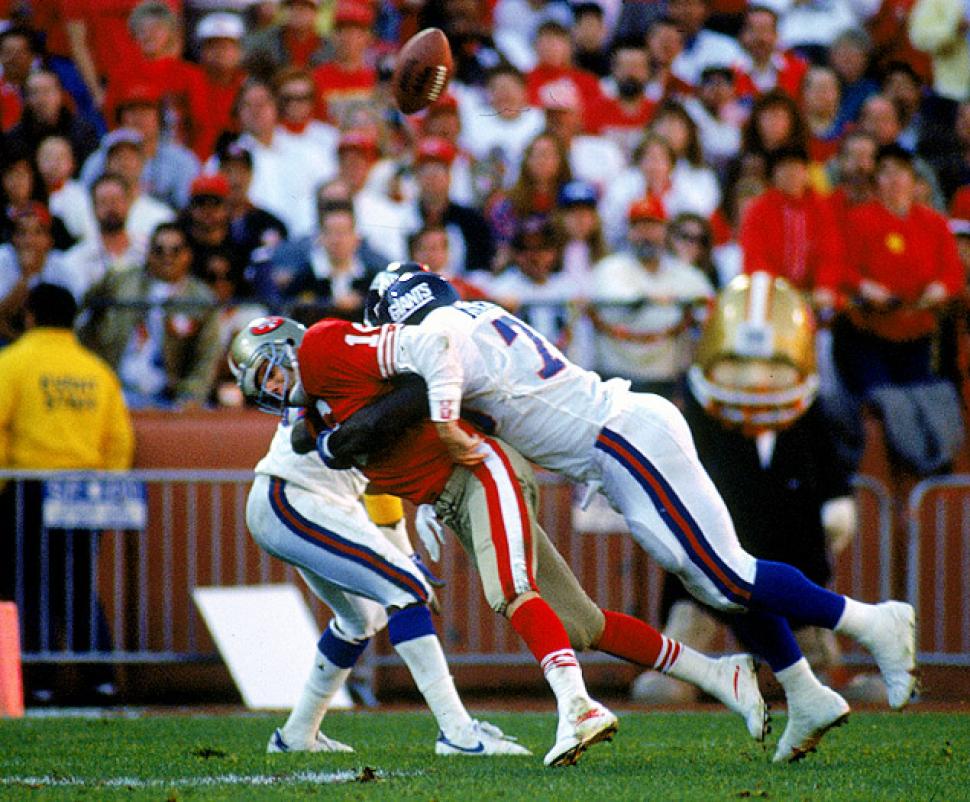 While we were decking the halls and buying presents 25 years ago this month, Arnold Schwarzenegger was playing a kindergarten teacher on the big screen in Kindergarten Cop while Al Pacino was once again Michael Corleone in the disappointing (or perhaps misunderstood) The Godfather Part III.

The NBA on NBC had just started it’s run on television after decades on CBS, and Vanilla Ice’s To The Extreme was the top-selling album of the season.

Today we remember when in the sports world from December of 1990, including another Heisman Trophy winner, a blockbuster trade in Major League Baseball, and record-breaking performances.

Remember what you were doing when these events unfolded?

Detmer didn’t attend the Heisman ceremony in person. BYU was half an ocean away, playing a game in Honolulu against the University of Hawaii. But he and his teammates watched the ceremony via a satellite hookup. When his name was announced, Detmer was treated to a dunk in the pool at the Princess Kaiulani Hotel.

Detmer spent 14 seasons in the NFL from 1992-2005, playing for six different teams, including the Packers, Eagles, 49ers, Lions, Falcons and Browns. His brother, Koy, also played in the NFL for the Eagles and Vikings.

In December 2012, Detmer became the seventh BYU Cougar to enter the College Football Hall of Fame. He currently coaches football at an Episcopal high school in Austin, Tx.

Joe Readies the Walkoff
In December of 1990, the Toronto Blue Jays traded Fred McGriff and Tony Fernandez to the San Diego Padres for Roberto Alomar and Joe Carter.

The trade was one of the biggest blockbuster deals in baseball at the time, and turned out to be a historic one for the Blue Jays. Nearly three years later, Carter hit a homer in the bottom of the ninth in Game 6 of the 1993 World Series, which won the game and the Series against the Philadelphia Phillies.

It was the second consecutive World Series title for Toronto, which turned out to be the team’s last playoff appearance until this past season, when they went to the ALCS before losing to eventual champion Kansas City.

Carter left the Blue Jays after the 1997 season, playing briefly with the Baltimore Orioles and San Francisco Giants before retiring in 1998. After a brief career as a TV analyst for the Blue Jays and Chicago Cubs, he is currently involved in charity work for the Children’s Aid Foundation. But Blue Jays fans will never forget his walk-off homer.

The Better O.J.
In December of 1990 Ottis “O.J.” Anderson of the New York Giants becomes the eighth player in NFL history to rush for 10,000 yards.

Anderson played in all 16 games that season for the New York Giants, and his 102-yard rushing performance earned him Super Bowl XXV honors in the Giants’ victory over the Buffalo Bills.

Anderson was drafted as the eighth overall pick by the St. Louis Cardinals in the 1979 NFL draft, and was named Rookie of the Year. He played in St. Louis before being traded to the Giants in 1986, scoring the final touchdown in a 39-20 Giants win over the Denver Broncos in Super Bowl XXI.

Anderson became an entrepreneur and motivational speaker following his retirement from the Giants in 1992. He’s president of Ottis J. Anderson Enterprises, and has also had stints as a Giants broadcast analyst and St. Louis radio host.

Ice Ice Baby
Professional hockey came to Tampa Bay when the Lightning officially joined the NHL as an expansion team in 1992. While most expansion franchises struggle in their first few seasons, the Lightning enjoyed quick success. They earned 53 points that first season, and forward Brian Bradley scored 42 goals, a team record that stood until the 2006-07 season.

The Lightning made the playoffs for the first time following the 1995-96 season, and captured their first Stanley Cup in an epic seven-game series against the Calgary Flames in 2004. The Lightning’s Martin St. Louis won the Hart Memorial Trophy as the league’s regular season MVP, while Brad Richards won the Conn Smythe Trophy as the Playoff MVP.

The team currently resides in the Atlantic Division of the NHL’s Eastern Conference. In 2008, they drafted Steven Stamkos, who scored his 500th career NHL point in October at Boston.

Before Brady & Belichick
In December 1990, the New England Patriots finished the 1990 season losing their last five games to finish 1-15, the worst record in franchise history.

This dubious distinction was long before Tom Brady (yes, Virginia, there really was a pre-Tom Brady era, and it wasn’t always merry and bright). The Patriots’ only victory came in Week 2 at Indianapolis against the Colts. They then proceeded to lose their last 14 games under Rod Rust, who was fired after just one season as head coach.

The team embarrassed themselves off the field as well. The day after the win against the Colts, tight end Zeke Mowatt and several teammates sexually harassed Boston Herald reporter Lisa Olson by showing themselves to her half-naked in the locker room.

Fortunately for the Patriots, the times changed and in 1996 under coach Bill Parcells, the Patriots won the AFC Championship before falling to Green Bay in Super Bowl XXXI.

In 2001, Brady, drafted in the sixth round of the 2000 NFL draft, took over for an injured Drew Bledsoe and led the team to the first of his four Super Bowl victories. He’s won two league MVP and three Super Bowl MVP awards during his career, and is once again poised to lead the Patriots into the postseason.

The Giant Who Ended Montana
In December of 1990 the San Francisco 49ers won three of their final four games to finish 14-2. They had established themselves as quite a dynasty, winning four Super Bowls during the 1980s, and were heavily favored to win their third straight following the 1990 season. No one in NFL history had accomplished such a feat.

With Joe Montana, Jerry Rice, John Taylor, Charles Haley and Ronnie Lott leading the charge, the 49ers won their first 10 games, something they hadn’t done in any of their previous Super Bowl seasons. The 4-6 Rams gave them their first loss in Game 11, and the only other loss came in a Dec. 23 game against New Orleans.

San Francisco earned a bye during the wild card weekend. After dispatching the Washington Redskins in the divisional round, they faced the New York Giants, a team they had already beaten during the regular season, in the NFC Championship Game.

But the Super Bowl gods didn’t smile on the 49ers this time. With the Giants trailing 13-12 late in the fourth quarter, Leonard Marshall blindsided Montana with a vicious sack that knocked the star quarterback out of the game, breaking his hand and badly bruising his sternum.

Steve Young came off the bench and put the 49ers in a position to win the game with a 25-yard completion to Brent Jones. But running back Roger Craig fumbled on the drive, Lawrence Taylor recovered it, and the Giants kicked a game-winning field goal to end the 49ers’ season and Super Bowl hopes.

Young replaced Montana in 1993, and led the team to one more Super Bowl after the 1994 season. The 49ers have had their share of ups and downs in the years since. They made the postseason from 1995-1997, only to lose to Green Bay in the postseason each time.

Team owner Eddie DeBartolo was suspended from the league in 1998 following a corruption scandal, and a 2-14 record in 2004 was the first time since 1979 the 49ers had finished last in their division. This season, they’re 4-9 through 13 games, last in the NFC West. But no one can take away the incredible run of 1981-1994, and those five Super Bowl wins.

30 Magic Dimes
In December of 1990 Scott Skiles of the Orlando Magic set an NBA record with 30 assists in a 155-116 victory over the Denver Nuggets.

Neither team was having a dream season, but for Skiles and the Magic, the night was special. With 19 seconds to play, Skiles found teammate Jerry Reynolds for his 30th assist, breaking the previous record of 29, set back in 1978 by Kevin Porter of the New Jersey Nets.

Skiles spent seven seasons with the Magic during his 10-year NBA career. He also had a brief stint with PAOK in the Greek League following the 1996 NBA season, but after failing to get along with his coach, Skiles asked to be released. Instead, the PAOK team president fired the coach and offered the job to Skiles, who promptly led the team to a winning record and 3rd-place finish.

Skiles then returned to the NBA as an assistant with the Phoenix Suns before becoming its head coach in 1999. He compiled a .595 winning percentage, and the Suns made the playoffs two of his three seasons there. He also coached the Bucks before coming back to Orlando this season to coach the Magic, who are currently seventh in the Eastern Conference.

In Memoriam
On December 31st of 1990 George Allen, legendary coach for the Los Angeles Rams and Washington Redskins, passed away.

Starting in 1948 at little old Morningside college in Sioux City, Iowa and ending in 1990 at Long Beach State, Allen’s career spanned over five decades. His work in the NFL (from 1966-1977) earned him permanent residence in Canton, Ohio, as a member of the Pro Football Hall of Fame (2002).