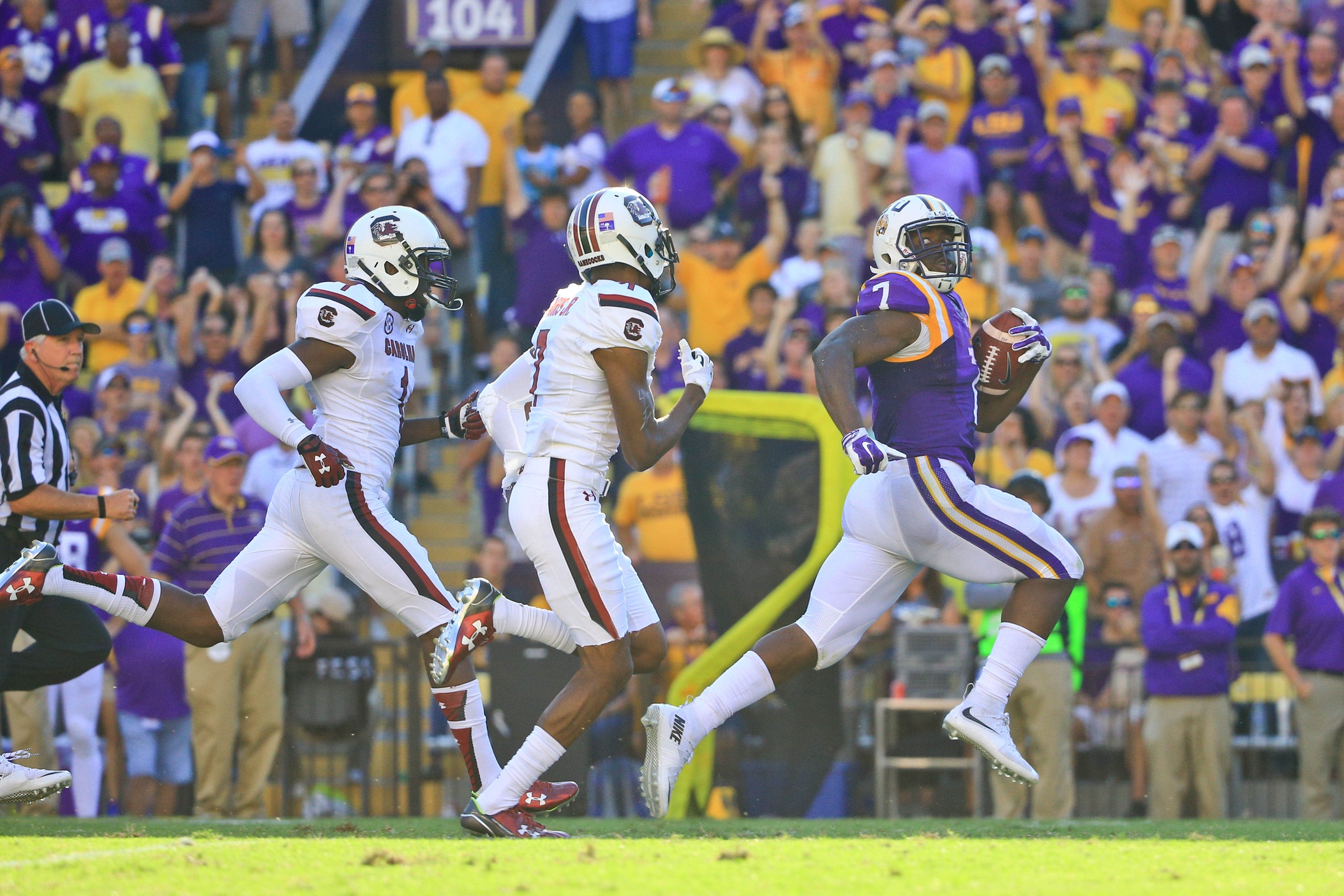 Halfway through the 2015 college football season one man has emerged as the clear favorite for this year’s Heisman Trophy. However, the race is much tighter than it was even two weeks ago, and this year’s crop of top players is rounding out nicely.

The following players have asserted themselves on the gridiron, helped their teams stay atop the heap in the standings and a great shot at becoming the Heisman winner at the end of the year.

Above and away, that’s how Fournette rolls. He rises above his competition and runs away from defenders. Every. Single. Weekend. He torched Florida’s vaunted defense last weekend with 180 rushing yards and two touchdowns, showing he can overcome any level of competition.

With 1,202 rushing yards and 14 touchdowns to his name, there has yet to be a contest in which Fournette doesn’t obliterate his competition. Quite literally, the man has gone over, around and through would-be defenders who have utterly failed to corral him.

Good things happen when Leonard Fournette is in the backfield, like sacks being turned in to 48-yd gains. #LSUvsCUSE http://t.co/4cCFQkmtR6

Featuring a legendary blend of size (6-foot-1 and 230 pounds) speed, burst, agility and raw power, LSU’s featured running back has been a treat to watch all year. If he continues on his current course, Fournette will finish the season with 2,204 rushing yards and 26 touchdowns.

And he plays in the SEC.

If Fournette keeps putting up monster numbers every week, then the trophy is his.

Nipping at Fournette’s heels right now is Boykin, who has topped 500 total yards three times and who has scored at least four touchdowns six times already this season. Leading a program that has been decimated by injuries, Boykin has carried the Horned Frogs to a perfect record.

A dual-threat quarterback who was formerly a defensive back and receiver, Boykin can do it all on the field. He has piled up 2,979 total yards and 30 total touchdowns already through just seven games. With 12 games on TCU’s schedule, he’s going to finish with 5,107 total yards and 51 touchdowns at his current pace.

No wonder he’s leading the nation’s No. 3-ranked offense in terms of total yards and the No. 2-ranked scoring offense. Utilizing pin-point accuracy, sound judgement and all his athleticism, Boykin is building up the argument to be the best all-around player in college football.

Does he get your Heisman vote???https://t.co/HSdy4K2XDJ

If Boykin manages to continue piling up 425-plus yards and four-plus touchdowns every time he steps on the field, while keeping the Horned Frogs from being defeated, then he’ll give Fournette a serious run for his money.

There isn’t another player on FSU’s roster who is more valuable than Cook. While Notre Dame transfer quarterback Everett Golson has been solid, it’s been Cook’s efforts almost every weekend that have carried the Seminoles offense. And, without at doubt he’s the biggest reason the program remains undefeated.

A true home-run hitter, Cook is averaging 42.1 yards per touchdown, per Brendan Sonnene of the Orlando Sentinel. NFL scouts are drooling over this young man, who pierces through holes and is already long gone before anyone in the secondary can catch him once he’s past the linebackers.

Overall his numbers don’t compare to those of Fournette, but Cook still sports an impressive overall stat line: 955 rushing yards on 110 carries with 10 rushing touchdowns. Even more impressive than his stats is the fact Cook has been actually producing at a more explosive rate since his injured hamstring became an issue in Week 5.

Without a doubt, Coleman has a chance to become a major star at the next level. He set a school record this past weekend and now has 16 touchdowns on the year, thanks to his ability to make moves like this.

The talented Baylor wideout is on pace for 32 touchdown receptions, which would be far and away the most in a single season by any receiver in college football history since 1956. The current record of 27 was accomplished by Troy Edwards of Louisiana Tech in 1998.

Amari Cooper dominated the college ranks last year and finished with 16 touchdowns all year. That was considered quite impressive. Coleman has matched Cooper in half the time.

Of course, it helps that Coleman plays in the Big 12, which as most know isn’t a haven for dynamic defenses. High scores and gaudy offensive totals are the norm for teams in this conference, yet still, Coleman is in a league of his own.

Whenever Ohio State head coach Urban Meyer needs to get the offense out of a funk, Elliott delivers. He’s the most consistent offensive weapon in Meyer’s arsenal, despite all the potential floating around in that locker room.

On the season, the rock-steady Elliott has 988 rushing yards and 11 touchdowns.

Not surprisingly, his best performance came in a contest in which Ohio State needed him the most. Elliott gouged Indiana’s defense for 274 rushing yards and three scores, helping the Buckeyes escape Bloomington, In. with a narrow 34-27 victory and keeping the undefeated season alive.

Based on the consistency of Elliott’s exploits, we should expect the Ohio State star to remain a top-five candidate for the Heisman all season long.