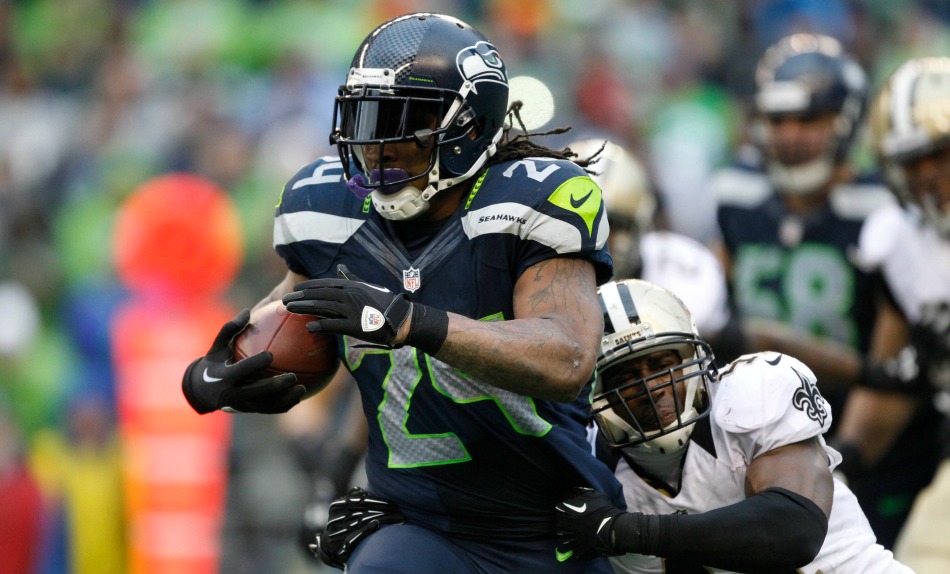 Once responsible for one of the most entertaining rivalries in the NFL, the Seattle Seahawks and San Francisco 49ers are both reeling as they prepare for Thursday Night Football in Week 7.

As you’d expect from teams with 2-4 records, there haven’t been many stellar performances by the top players on both teams this years. Russell Wilson, Colin Kaepernick, Marshawn Lynch, Vernon Davis, Jimmy Graham and to a lesser extent, Carlos Hyde, have all disappointed fantasy football owners more weeks than not.

The upcoming Thursday Night Football game is shaping up to be a snore-fest filled with stagnant offensive performances, but could we see some breakout performances? Here are some predictions, based on what we’ve seen so far.

With 635 total yards, four touchdowns and no interceptions thrown the past two weeks, it seems Kaepernick is finally pulling out of his early-season funk. This upcoming game is absolutely pivotal for his confidence and could be the one everyone looks back on as a game-changer as it pertains to his long-term status with the 49ers.

Seattle’s defense isn’t quite as potent on the back end right now as it has been the past few years.

The cornerback well hath run dry, and Kam Chancellor’s holdout most certainly hurt them in the chemistry department. Kap should have a solid game at home, and nobody should be surprised if he hits Torrey Smith (two touchdowns of 75-plus yards) on another long bomb.

Seattle’s offensive line hasn’t done Wilson any favors this year. He’s been sacked a league-high 26 times (over 4 per game) and is lucky he only has three interceptions to his name.

San Francisco’s defense struggles to pressure quarterbacks and only has nine sacks this year. Eight have been tallied at home, however, and fans not familiar with the name Aaron Lynch will be in for a treat on Thursday night. Seattle doesn’t feature the receivers to take advantage of the inexperienced secondary of the 49ers.

Fantasy football owners might want to consider starting someone else this week.

Davis has been a ghost this year, and based on a consistent lack of effort, this trend isn’t likely to be reversed any time soon. Recently sidelined with a knee injury, Davis had no catches last weekend and whiffed on some blocks.

If he continues to underperform, then the 49ers will be forced to continue using Garrett Celek and Blake Bell, along with fullback Bruce Miller, who has been a big contributor the past two weeks.

Fantasy football owners should keep Davis on the shelf until he proves he is no longer a liability.

Prediction: One catch for eight yards and no touchdowns This could finally be a breakout opportunity for Graham, who has struggled to stay relevant within Seattle’s offense at times this year. With just 29 catches for 344 yards and two touchdowns, he’s only producing at about half the rate he did last year with the New Orleans Saints.

However, the 49ers might offer little resistance in the middle of the field, where they’ve been particularly vulnerable.

#49ers have allowed a completion rate of 83.3% and a passer rating of 115.0 on targeted throws between the numbers this season.

Fantasy owners should expect a decent score from Graham this week against the porous 49ers secondary.

Prediction: Six catches for 99 yards and one touchdown.

San Francisco’s offense revolves around Hyde getting his touches. It’s exactly the same thing we saw the past decade with Frank Gore, and there is hardly ever a reasonable explanation for him getting less than 20 touches in a game. Therefore it’s not a surprise that the three games in which the 49ers were competitive this year he hit that mark.

Hyde is dealing with a sore foot, but he’s a full go for this contest. Since his breakout Week 1 performance, it’s been tough sledding for the Ohio State product, and it will likely be so again on Thursday Night Football against Seattle’s stingy front seven.

Fantasy football owners better hope Hyde catches a few passes, but he’s still worth the start as a flex option.

It hasn’t been a banner year for “Beast Mode.” He missed two games with a hamstring injury and hasn’t been able to find much purchase playing behind a terrible offensive line. With just 243 total yards to his name this year and only one score, Lynch has shown his age in a major way as he approaches the 30-year threshold.

The 49ers are open to being gashed in the middle, though, and have allowed six rushing touchdowns. It’s always a bloody battle when these two physical teams meet up, and Lynch almost always shows up as a gladiator amongst gladiators.

Fantasy football owners would be foolish to sit Lynch. He’s due.

Prediction: 110 total yards and one touchdown.