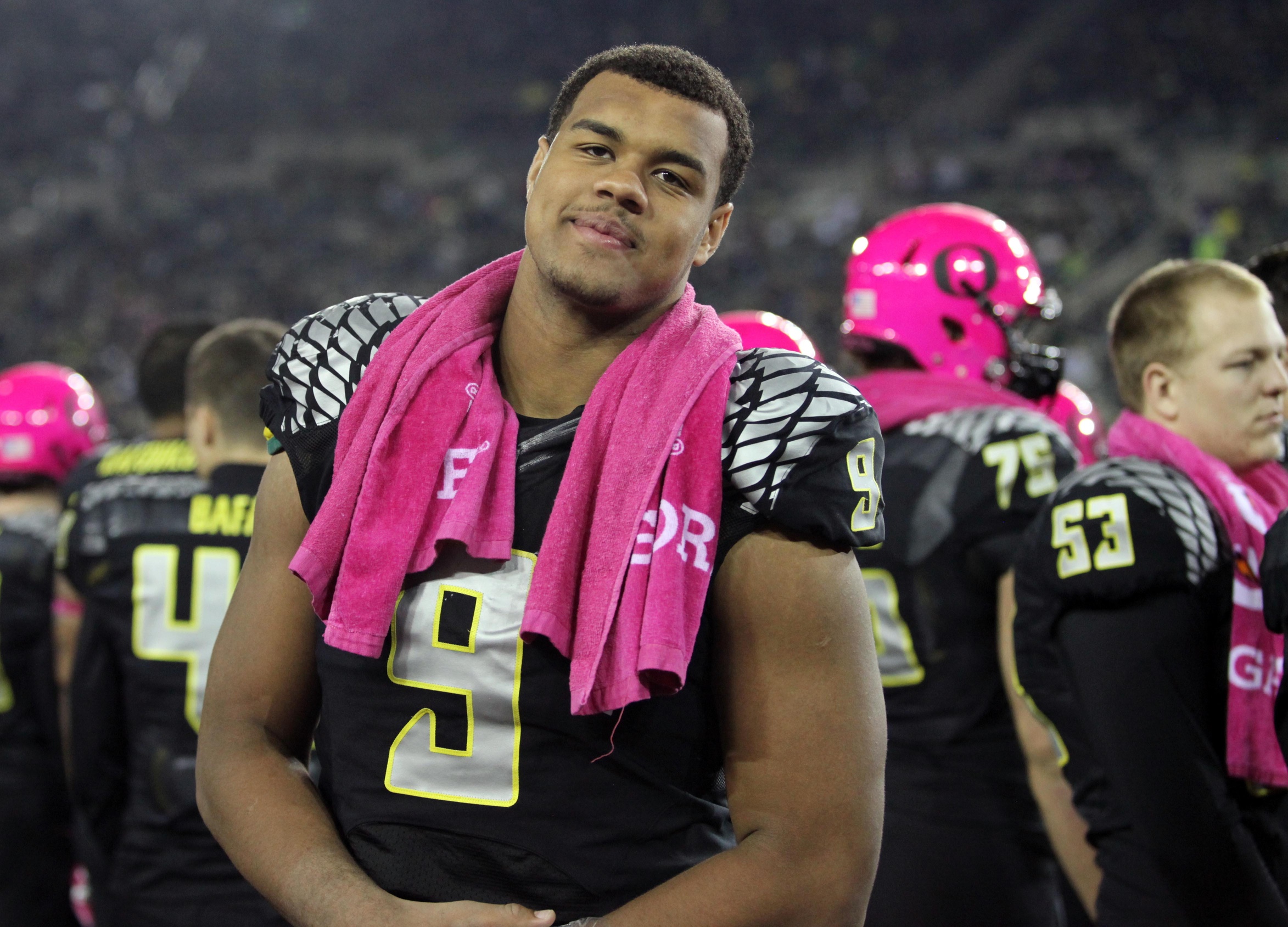 Leading up to the 2015 NFL Draft, San Francisco 49ers fans almost universally hoped their favorite team would make a bold move for an offensive weapon. Among the names most commonly spoken were receivers Dorial Green-Beckham and DeVante Parker, though with a draft so stocked of talent at the position, plenty of other names would have been just as enthusiastically welcomed.

Therefore it was a shock when—after three rounds concluded on Friday night—general manager Trent Baalke had yet to pick a single offensive player. Instead, the 49ers picked up three shiny weapons for new defensive coordinator Eric Mangini to play with: defensive lineman Arik Armstead out of Oregon, small-school safety Jaquiski Tartt from Samford and pass-rusher Eli Harold out of Virginia.

Twitter timelines swelled with disillusioned fans who couldn’t believe what they were seeing.

“Who is Tartt?” was a commonly seen question, along with “Armstead? Why did the 49ers pick up a project player? We need instant impact!!!”

Heading into the draft, I was among the throng desperate for an elite receiver like Parker, and I was thoroughly against drafting Armstead at No. 15. From the studying I’d done pre-draft, I didn’t like the lack of consistent effort I saw in the young man, and I didn’t like how he gave up on plays that were not coming his way.

In short, he didn’t display the type of motor you look for when searching for stud defensive linemen (see: Justin Smith).

After listening to the reasoning by the 49ers brass, however, and hearing what head coach Jim Tomsula had to say about Armstead, I’ve changed my tune a bit. Of course, trading down and earning another fourth-round pick this year, along with a fifth-round pick in 2016, made the selection a lot more palatable as well.

You time and test, it’s all there. Now you meet the guy and it’s intriguing. It’s a nice guy, a good guy. And he’s a competitive guy. You can see that. You can get that out of the conversation. He’s inconsistent in tape and he’s young, so we’ve got to grow it up and he’s got to grow it up. It’s all of us working together and the development of football.”

It’s clear the team understands and sees everything I, and many others, were worried about when it concerns the mammoth defensive lineman, who measures in at 6’7” and 292 pounds. It’s also just as clear the team has a plan to help him achieve his incredible potential and that he was a player that was highly coveted heading into the draft.

Baalke said he doesn't trade back unless there's an alternate plan. He coveted Armstead. #49ers #NFLDraft

After landing his “coveted” potential replacement for an aging Justin Smith, who may or may not return in 2015, Baalke rested.

And it was good.

On the second day, with plenty of offensive weapons available, including fan-favorite DGB, Baalke shocked the fan base by selecting a relative unknown (as is his habit) by selecting Tartt in Round 2.

Personally, I did mental backflips—couldn’t have been happier.

For those who aren’t aware of what kind of player Tartt is, just think Kam Chancellor, and let your mind be at ease. Also, here’s a couple of takes from two of the most respected draft analysts in the business, courtesy of the team’s Twitter account:

“He’s a small guy but a big-hitter. He is aggressive, violent & versatile. He can play FS, SS or nickel LB."

Todd McShay on Jaquiski Tartt: “He’s really good versus the run. He gets in the box and drops the hammer.” #49ersDraft

Baalke also had high praise for the safety, calling him “a guy who can contribute on all four downs… He’s fast, physical and well-coached.”

Personally, I envision a nickel defense with Tartt playing linebacker next to NaVorro Bowman, with Jimmie Ward (Tartt’s best friend) as nickel cornerback, with Eric Reid and Antoine Bethea at safety—a powerful, yet sleek, lineup that can cover the run and pass with equal precision.

It’s going to be glorious.

After the selection of Tartt, fans assumed the team would finally turn its attention to offense in the third round…but alas, it wasn’t meant to be.

Instead of landing a top running back or one of the remaining receivers—in this, a receiver-heavy draft—Baalke decided to pull the trigger on Harold with the team’s only third-round pick.

Harold was rated as a first-round pick by many draft experts, and the team definitely needs the depth at the position of outside linebacker.

Eli Harold is a BPA pick in San Francisco. I had him late Rd 1.

Talk about a steal—no savvy fan can fault Baalke for this selection.

Harold wasn’t just brought on for depth purposes. This kid can, and will, compete with Aaron Lynch and Ahmad Brooks for the starting outside linebacker spot opposite Aldon Smith.

In addition to his obvious natural talent (36.5 tackles for loss and 17.5 sacks in three years at Virginia), Harold brings a psychological edge to his new team. This young man lost his mother and brother just two months apart back in 2011, but the harrowing experience has only served to harden his resolve to succeed.

Then came his draft-day plunge into the third round.

This is just adding fuel to my fire, not having teams believe in me, not believing I was a late-1 or early-2 or even a late-2, but dropping into the third round,” Harold said (h/t CSN Bay Area’s Matt Maiocco). “I feel like I’m going to use this as motivation to push my through my NFL career.

I’ll never forget this moment, like I’ll never forget the day my mother passed away. From that day, I feel like I’ve been a ball ‘o fire. Everybody I’ve touched, they’ve felt it. Everybody I’ve been around, I’ve had an impact in that area, wherever I was—in the community, on the field, in the locker room. I’ve always had a chip on my shoulder, and it’s only getting bigger.”

Now, I’m no expert, but if that doesn’t give you chills, then you may need to see a doctor.

Hopefully, a little bit of Harold’s fire rubs off on Armstead, because God knows if this young man gets his motor right, there’s no limit to what he can accomplish on the field. Throw in Tomsula’s influence, along with (hopefully) another year of “Cowboy,” and the 49ers might just have landed a perennial Pro-Bowler.

All three defenders have the potential to become integral members of the 49ers dominant defense for years to come. Tartt and Harold, in particular, have legitimate shots to make an immediate impact—both on special teams and as part of the team’s nickel packages.

Still, many fans are wondering how Baalke could have neglected his offense. Many of them are under the impression the 49ers are lacking in this department, which perplexes me immensely.

Furthermore, Quinton Patton and Bruce Ellington are already in the wings waiting for their opportunities to shine. Patton has been mentioned by Baalke as someone who just needs a chance to prove himself. Now that Michael Crabtree is across the bay, playing in Oakland, that chance will arrive this summer.

Throw in a rejuvenated Vernon Davis, Carlos Hyde, Kendall Hunter and stalwart Anquan Boldin, and you’re looking at a potent offense capable of putting up points in bunches.

The 49ers are absolutely stocked with talent on offense and defense—both for right now and the future. There is no reason for fans to panic about whether or not the team drafts players at any position. Baalke has it covered. By the end of the 2015 campaign, every fan that cried in agony after these defensive selections will be singing his praises.