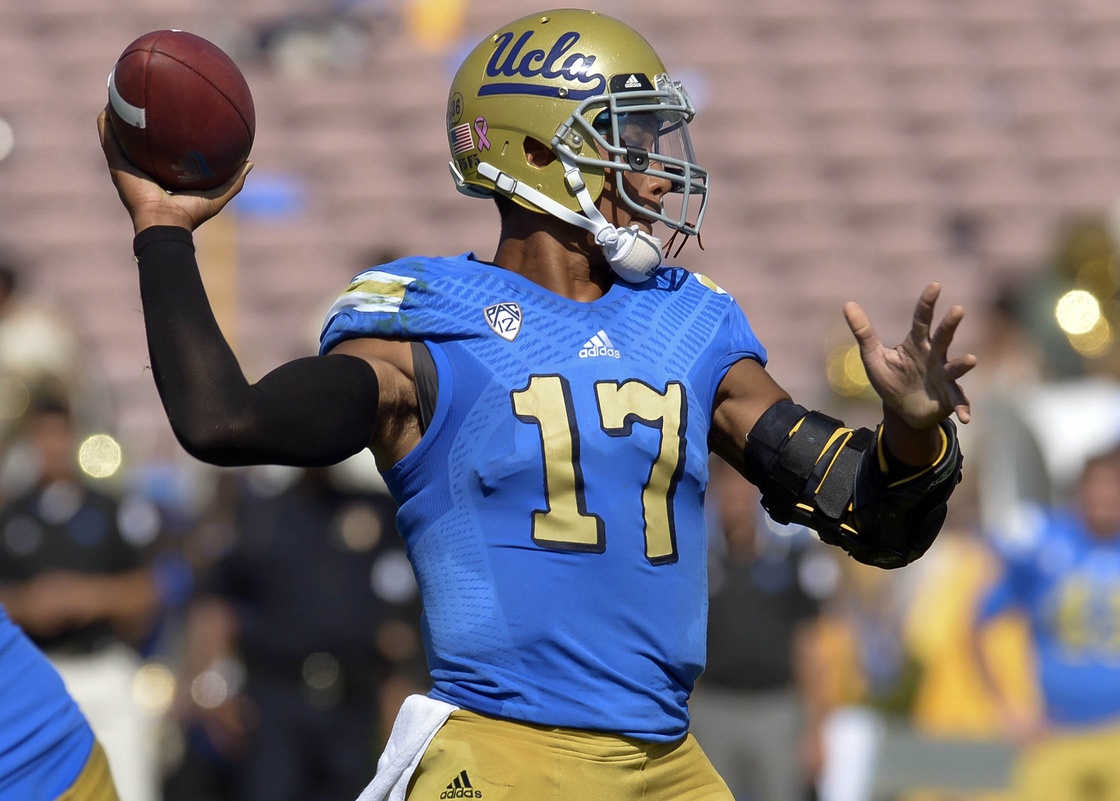 UCLA quarterback Brett Hundley could have been one of the top quarterbacks taken in 2014, but he elected to return to school. However, a lackluster senior campaign has some teams shying away from the once-lauded prospect. Still, Hundley will be selected in the early rounds of the 2015 NFL draft, and for good reason.

In three seasons with the Bruins, Hundley posted a completion percentage of 67.6 and threw 75 touchdowns to just 25 interceptions, amassing 3,000-plus yards each year. As a freshman in 2012, Hundley set what stood as career highs with 3,745 passing yards and 29 touchdowns, though he tossed a career-worst 11 interceptions. His junior-year total of 3,819 yards and 35 combined scores drove his hype train. Then in 2014, Hundley passed for 3,155 yards, 22 touchdowns and set a personal-best 69.1 percent completion mark while averaging eight yards per completion.

Though Hundley is certainly the third name on draft boards behind Marcus Mariota and Jameis Winston, the former Bruins’ quarterback is being looked at as a project rather than an instant-impact player. Thus, Hundley is essentially 2015’s Ryan Tannehill, who was ranked behind Andrew Luck and Robert Griffin III in 2012. But unlike Tannehill, Hundley has little chance to go inside the top 10; Rather, he’ll likely land late as a late-first or early second-round pick. We know a few teams have interest in the prospect, but where are the likeliest landing spots for Hundley?

Excellent quarterback play has not been the Jets’ thing in recent years. From Mark Sanchez to Michael Vick to Geno Smith, the position has recently been a weakness in New York. Sticking with their theme, recent reports have indicated that the Jets are looking to move on from Smith and are targeting Mariota on draft day. But what if they miss out on their top choice? Well, Hundley would be a nice consolation prize with their second-round pick at No. 37 overall.

New York has the tools to help a shot-caller grow. Eric Decker and Brandon Marshall comprise a respectable wide receiver duo, and the team’s rushing attack in Chris Ivory and Stevan Ridley is formidable enough that defenses cannot focus on the quarterback alone. Plus, it’s not like suitors are lining up at the door for a chance to steal Smith from the team. Hundley would have time to mature and be aided a solid core around him to grow. If the Jets miss on Mariota, Hundley should be the team’s top target in Round 2.

One could say that the quarterback situation in Houston is murky at best, since Brian Hoyer, Ryan Mallett and Tom Savage will battle for the starting gig in training camp. Arian Foster still has plenty left in the tank as lead back, and DeAndre Hopkins is an up-and-coming talent at wide receiver. All this team is missing is a viable quarterback.

Should Hundley fall to the Texans in the second round at pick 51, he’d be able to grow with a talented young wideout and lean on a defense led by J.J. Watt. Most importantly, Hundley would have a chance to learn under head coach Bill O’Brien, a terrific developer of quarterbacks. O’Brien likes a quarterback who can air it out, and Hundley’s arm strength makes him a legitimate fit in Houston’s system. There is little doubt that the Texans will look to add another horse to their quarterback race, and Hundley could be their guy.

As the Redskins continue to lament their selection of Griffin III in 2012, the team’s second-year coaching staff led by Jay Gruden must be considering alternatives to starting the season with RGIII under center. Though taking Hundley in tn the first round would be embarrassing, Washington will certainly consider him if he’s available in Round 2 at 38th overall.

From Alfred Morris to Desean Jackson and Pierre Garcon, the Redskins’ skill positions are loaded with talent. A young quarterback would have a plethora of targets to rely on throughout his early years. While Washington will likely give Griffin III one more chance to prove his worth, Hundley would push Griffin III to retain his starting spot, provide an insurance policy or take the No. 1 job—all of which are good things.

As rumors swirl about Chip Kelly’s reported interest and desire to trade up for Mariota, few consider the possibility that Kelly could be laying a smokescreen to acquire Hundley in the second round at No. 52. The Eagles are in the market for a quarterback as Sam Bradford and Sanchez currently head the depth chart, but more pressing needs such as safety or right guard will lead the team to search other positions with their first pick.

Yet the second round is an ideal place to land a project quarterback like Hundley. The Eagles have interest in the Bruin quarterback, evidenced by a pre-draft visit. If Kelly cannot get his guy in Mariota, the team could target Hundley as a backup plan.

As Andy Dalton and the Bengals continue to wallow in mediocrity during the Marvin Lewis era, the team must begin to look to the future. Dalton has had a roller-coaster ride of a career with the Bengals and shown few signs that he can consistently perform well enough to lead a Super Bowl-winning team. Thus, Cincinnati would be smart to add a rookie in the draft and develop him.

In addition to the Bengals boasting one of the league’s best rushing tandems in Giovani Bernard and Jeremy Hill, they have a top wide receiver in A.J. Green. If Cincinnati selected Hundley in the second round at pick 53, the rookie would have time to grow behind Dalton before taking the field. Plus, a safety net like Green is a nice bail-out option when under pressure. Don’t be surprised if the Bengals snag Hundley in the second round.