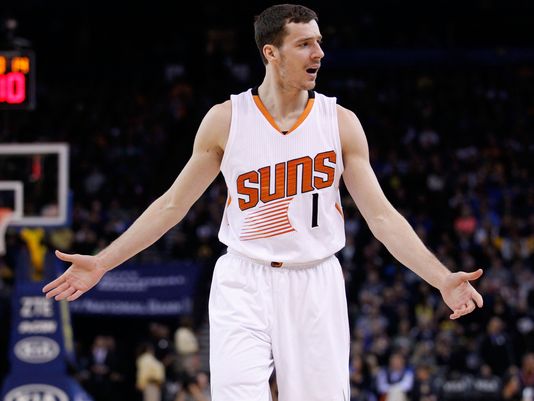 If you weren’t in front of social media this afternoon, you missed quite a bit. There were a plethora of NBA deadline deals that flipped the league on its head.

Let’s start with the blockbusters.

The Miami Heat have won the Goran Dragic sweepstakes. They acquired him and his brother Zoran Dragic from the Phoenix Suns for a whole host of players. In return, Phoenix received Danny Granger, Norris Cole, Shawne Williams, Justin Hamilton and two first-round picks. It doesn’t end there. Phoenix then shipped Cole and Williams to the New Orleans Pelicans for forward John Salmons.

This is a great get for Miami. They were having issues with the point guard position all season. Norris Cole is more of a combo guard and Mario Chalmers has underachieved basically his whole career. Miami now boasts a very strong starting five consisting of Dragic, Dwyane Wade, Luol Deng, Chris Bosh and up-and-coming young center Hassan Whiteside.

The trade finally gives the Heat some stability with a floor general who can run the offense. Dragic, 28, is averaging 16.2 points (on 50% shooting), 4.1 assists and 3.6 rebounds on the year. The Slovenian simply wasn’t fitting in with Phoenix this season. He’s a point guard by trade, but found himself playing the wing a lot this year due to all the guard depth that Phoenix possesses. Eric Bledsoe and Isaiah Thomas are both primary ball handlers, and the three simply didn’t mesh together very well.

Dragic will be a free agent after the season, and since Miami had to give up two first-round picks in order to acquire him, it’s safe to say he may be signing back with them long-term. When given the keys to the car, Dragic has shown flashes of greatness. Last season he made third team All-NBA, while averaging 20 points and 6 assists in the process.

As for Phoenix, the move makes sense as well. They were most likely not going to re-sign Dragic in the offseason, so they got what they could for him. Two first-round picks is a pretty nice haul for a player they weren’t going to retain long term.

On a side note, Norris Cole could step in and start right away for the Pelicans. Shawne Williams will be bought out and likely should latch on to a playoff contender looking for a three-point shooter.

The Oklahoma City Thunder traded guard Reggie Jackson to the Detroit Pistons in a three-way deal Thursday. In return, the Thunder will receive Enes Kanter from the Utah Jazz as well as D.J Augustin and Kyle Singler from the Pistons.

It was essentially a salary dump for Utah. They got Kendrick Perkins in return, but he’s going to be bought out.

What a great move by general manager Sam Presti. He knew he would not be able to re-sign Jackson in the offseason, so he moved him for three pieces that will help the Thunder contend this year. Kanter and Augustin will anchor the second unit for Oklahoma City—a team that is desperate for bench scoring. Singler is a solid wing defender and three point shooter. He will compete with Anthony Morrow for minutes off the bench as well.

As for the Pistons, they are a team in rebuild mode. Brandon Jennings is out for the season with a torn Achilles, so Jackson will step right in and see all the minutes he can handle at the point. He’s a crafty combo guard with elite scoring ability. Just 24, Jackson was averaging 12.8 points and 4.3 assists in 28 minutes per game off the Thunder bench. He has also voiced his displeasure with his role on the team ever since they acquired Dion Waiters back in January.

It’s conceivable to think that Jackson could re-sign with the Pistons this summer, especially if they lose Greg Monroe, who’s also a free agent. I like this move for Detroit. They didn’t really give up anything of real value and they’re getting a young player with a lot of potential a chance to blossom. Well done, Stan Van Gundy.

This one was completely out of nowhere. It’s essentially a four-way trade when you actually break it down. The trade sends Brandon Knight to the Suns, Michael-Carter Williams, Miles Plumlee and Tyler Ennis to the Bucks, and draft picks to the Sixers. It really becomes interesting when the Suns then go and trade guard Isaiah Thomas to the Celtics in exchange for Marcus Thornton and a 2016 first-round pick.

The Sixers have now taken taking to a whole new level, as they just traded their only real NBA starter. They better hope all these draft picks work out in their favor moving forward.

Meanwhile, the Bucks also made a questionable move here by trading Brandon Knight. The 23-year old is averaging 17 points, five assists and four rebounds on the season. Milwaukee is also seven games over .500 at 30-23, which is good for the sixth seed in the east. It appears that Jason Kidd doesn’t view Knight as the long-term answer at point guard moving forward. Carter-Williams is more of a pass first point guard, while Knight is more of a scorer. Last season’s rookie of the year winner should get his first taste of the NBA playoffs this season, barring a complete collapse from Milwaukee.

The Celtics, on the other hand, did very well for themselves. Isaiah Thomas can be an elite scorer in this league when given the opportunity. Boston will take on his contract and have him for the next two seasons. Thomas will step into a crowded back court in Boston. He’ll compete for minutes with Evan Turner, Avery Bradley and Marcus Smart, but you don’t go and trade a first-round pick for a player you aren’t going to start.

Here’s a quick rundown at some other minor trades on the day:

The Timberwolves dealt Thaddeus Young to the Nets for Kevin Garnett.

The Nuggets sent guards Arron Afflalo and Alonzo Gee to the Trail Blazers for Will Barton, Victor Claver and Thomas Robinson

The Kings sent Andre Miller to the Kings for Ramon Sessions in a swap of backup point guards.

Finally, the Celtics sent Tayshaun Prince to the Pistons for Jonas Jerebko and Luigi Datome.

It was quite the day in the NBA. The landscape has changed for certain playoff teams. The second half of the season will certainly be exciting. And for the first time in a long time, we have multiple teams that can truly compete for a championship.