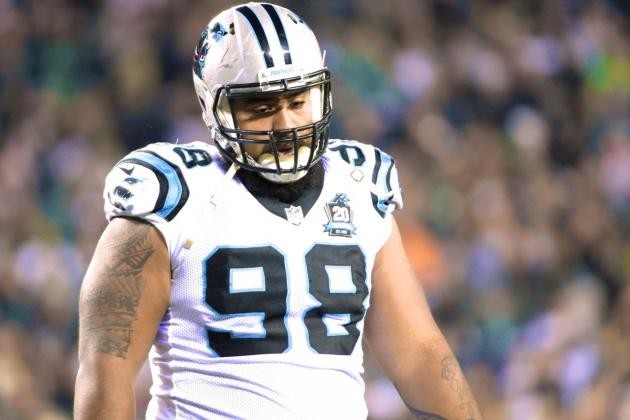 In the second game on Saturday, the Carolina Panthers head to Seattle to take on the Seahawks. This game is interesting from a multitude of perspectives, but the thing that seems to catch everybody’s eye is how eerily similar these two football teams are.

If you look at each team in a vacuum, both boast a mobile quarterback that can beat you with his legs as well as his arm and both also feature a strong two-headed rushing attack led by a physical bruiser. Both teams also have an extremely athletic defensive front with ridiculously fast linebackers. And finally, both employ a makeshift receiving corps that lacks a true superstar.

On paper, you would think the game will stay close, but Seattle rarely loses at home and Carolina has been sub-par all year, evident by its 7-8-1 regular season record. With all of that said, lets take a look at the five-most intriguing storylines from this game.

1. How will the Panthers D-Line cope without Star Lotulelei?

Probably the one guy besides Luke Kuechly who the Panthers couldn’t afford to lose on the defensive side. Lotulelei is Carolina’s best defensive tackle and premiere run stuffer, a position that is ultra important when you’re trying to stop Russell Wilson, Marshawn Lynch and the rest of that Seattle rushing attack. Lotulelei fractured his foot during Tuesday’s practice when he stepped on another teammate. The hope is that he would be able to play in the Super Bowl if the team makes it that far. As for Sunday, the Panthers will have to cope without him. It wouldn’t be surprising to see defensive coordinator Sean McDermott draw up some special blitz packages in an attempt to mask not having his star defensive tackle on the field. Anyway, give the edge to Seattle in this one.

2. How well will the Panthers run the ball against the speedy Seahawks defense?

Quiz time. Who has led the NFL in rushing yards since week 13? I’ll give you a hint. If you guessed Le’Veon Bell, Jamaal Charles, or even DeMarco Murray you would be wrong. The answer is Jonathan Stewart. The Oregon product has averaged over 100 yards per contest since week 13. Talent has never been a question for Stewart, it’s always come down to his health, which has consistently failed him in the past. Now healthy, Stewart teams up with Cam Newton to form a one-two-tandem that seems to be clicking on all cylinders on the ground.

It will be interesting to see what the Panthers do with their prized rookie wide receiver. We already know that All-Pro Richard Sherman locks down the left side of the football field, which leaves us with questions on where the Panthers will line up their wide outs. My guess is they will try to avoid having Benjamin on the same side as Sherman, so look for either Jericho Cotchery take on that challenge. Greg Olsen is the X-Factor in this game. He has always been Newton’s security blanket since he joined the Panthers. He is also about as sure handed as they come. The Seahawks will not be able to cover him with a single high safety, so it will be interesting to see the game plan defensive coordinator Dan Quinn draws up.

With Lotulelei out, it’s time for the next man up to show what he’s made of. This obviously won’t be an easy task going up against Marshawn Lynch. The guy simply does not go down. The Panthers will have to put two hats on him every time he touches the ball. I suspect he will run wild in this game. He’s a lot to deal with when your defense is at full strength, but when you take out a key cog, you can be sure he will run roughshod on you. We could be looking a 120-plus yard effort from Beast Mode on Saturday night.

5. Will the legend of Russell Wilson continue to grow?

Coming off his first career Super Bowl win a season ago, Wilson led the Seahawks to a 12-4 record and the NFC’s number one overall seed in this year’s postseason. Wilson is the total package, he can beat you in a plethora of ways, and is more cerebral than anyone gives him credit for. The man rarely makes a bad decision, he always knows when to throw the ball away, and when to run with it if the play breaks down. He is a budding superstar in this league and has his Seahawks in prime position to make yet another Super Bowl appearance.