Not a single team in the NFC South reached the .500 mark in 2014. The best any team could manage were seven wins—seven for the New Orleans Saints and seven for the Carolina Panthers. The Panthers had the honor of representing the division in the playoffs, with a 7-8-1 record; they defeated the Arizona Cardinals in the wild card round before being bounced out the following week by the Seattle Seahawks. Meanwhile, the Atlanta Falcons and Tampa Bay Buccaneers both had exceedingly disappointing seasons, with six wins and two wins respectively.[mks_pullquote align=”right” width=”300″ size=”24″ bg_color=”#000000″ txt_color=”#ff3d3d”]One look at how 2014 played out for the entire division and it’s quite clear all four teams have a lot of work to do in the draft.[/mks_pullquote] Josh McCown couldn’t replicate the brief magic he made as the Chicago Bears’ quarterback the year before while the Falcons had a full-scale collapse that resulted in head coach Mike Smith’s firing. Former Seahawks defensive coordinator Dan Quinn is now their leader.

One look at how 2014 played out for the entire division and it’s quite clear all four teams have a lot of work to do in the draft. It’s more than just the Saints trading tight end Jimmy Graham to the Seahawks for center Max Unger, or the Panthers trying to re-load their offensive line in free agency in order to avoid adding more help via the draft or the Buccaneers simply needing a quarterback and determining their future to be bright. These teams need a lot of help in order to not just improve their lots in 2015 but to build something good in the long term. The draft may not be the only way to do this, but it’s the best one. Let’s look at what all four NFC South teams would like most for their 2015 draft classes.

The 2015 draft is expected to be defense-heavy for the New Orleans Saints, considering they were Pro Football Focus’ (subscription required) second-worst overall defense for the 2014 season. Run defense and pass coverage, in particular, were considerably deficient. The Saints were well aware of their myriad needs and thus pulled off a series of trades—tight end Jimmy Graham, wide receiver Kenny Stills, guard Ben Grubbs—in order to stockpile additional draft picks. The moves paid off, with the Saints possessing five of the draft’s top-80 picks.

Now comes the real work of getting the defense where they want it to be. This starts in Round 1. It’s quite possible that the Saints bring on Washington nose tackle Danny Shelton with the 13th-overall pick if he is there. If he’s not, Texas’ Malcom Brown, Florida State’s Eddie Goldman or Oklahoma’s Jordan Phillips could be options. The Saints could also think hard about Michigan State cornerback Trae Waynes if he’s still on the board, given how dismal their cornerbacks were in coverage last year.

The Saints will likely return to the defensive front seven at least one or two more times, taking both defensive linemen and linebackers with mid and late-round picks. There are just simply not enough talented players on defense for the Saints and they must upgrade however and whenever they can. Offensive line help would be welcomed, as well, but that’s not as pressing a concern as their need to rebuild the defense.

This draft, much as the drafts of recent years, is a crucial one for the Carolina Panthers, given their longstanding salary cap problems that have prevented the team from being all that active in free agency. That’s a shame, because their biggest need, offensive tackle, is often one better served by a proven veteran than a green rookie.

The Panthers did add veterans to their line in free agency—just not the ones you want. Tackles Michael Oher and Jonathan Martin came aboard this offseason, but in an ideal world both are backup swing tackles and not 16-game starters. The Panthers need to get serious, which means they need to seriously entertain the idea of moving up from where they currently stand at No. 25 in Round 1. Top-tier offensive tackle prospects like Brandon Scherff, La’el Collins or Ereck Flowers could be well out of their reach if they stand pat.

The Panthers aren’t done adding to their defense, either. Their pass-rush declined, which had a domino effect on the secondary. Suddenly, their cornerbacks and safeties aren’t looking as good without a dominant defensive front doing much of the hard work against opposing passers. Carolina will need to either add another component to its pass-rush in the front seven or upgrade either (or both) the safety and cornerback positions.

Wide receiver also remains an issue, especially considering that second-year player Kelvin Benjamin can’t do it all himself. The Panthers added the speedy Ted Ginn, Jr., this offseason and expect big things from New York Jets castoff Stephen Hill (who spent his 2014 season in Carolina on the practice squad). But there isn’t many game-changers among the Panthers’ receiving corps; lucky for them, the 2015 draft class is incredibly deep at receiver, with a number of talented players to be had in Rounds 2, 3 and even 4.

The Atlanta Falcons’ biggest weakness remains in the trenches. Though the offensive line got its act together, allowing only 31 sacks, it didn’t do a good job in run-blocking. The defensive front seven struggled mightily in 2014, with its pass-rushers producing only 22 sacks on the season.

The Falcons pick eighth in Round 1, which is a perfect spot to land one of the draft’s better pass-rushers. This is extra crucial for the team this year, given the switch from a hybrid 3-4/4-2-5 base defense last year to new head coach Dan Quinn’s base 4-3. The Falcons, as SB Nation’s Kevin Skiver noted earlier this year, featured a heavily-rotating front last year, while Quinn prefers personnel stability. He needs to have players on hand who can not only master his system but also stay on the field for all three downs.

Clemson pass-rusher Vic Beasley seems to be the no-brainer pick in Round 1 should he still be on the board. If not, Florida’s Dante Fowler would be the next-best option. They should also go back to the pass-rushing well in later rounds as well as bring on additional help at both linebacker and defensive line. Quinn’s number one priority in this draft must be building the defense in his image.

The Falcons also need help at running back. Devonta Freeman and Antone Smith are an intriguing pair, but the team needs more power to pair with speed. Luckily, the running back position in this year’s draft class is deep, so the Falcons won’t have to sacrifice earlier-round defensive help to snag one. This can wait until Round 4 without a problem. 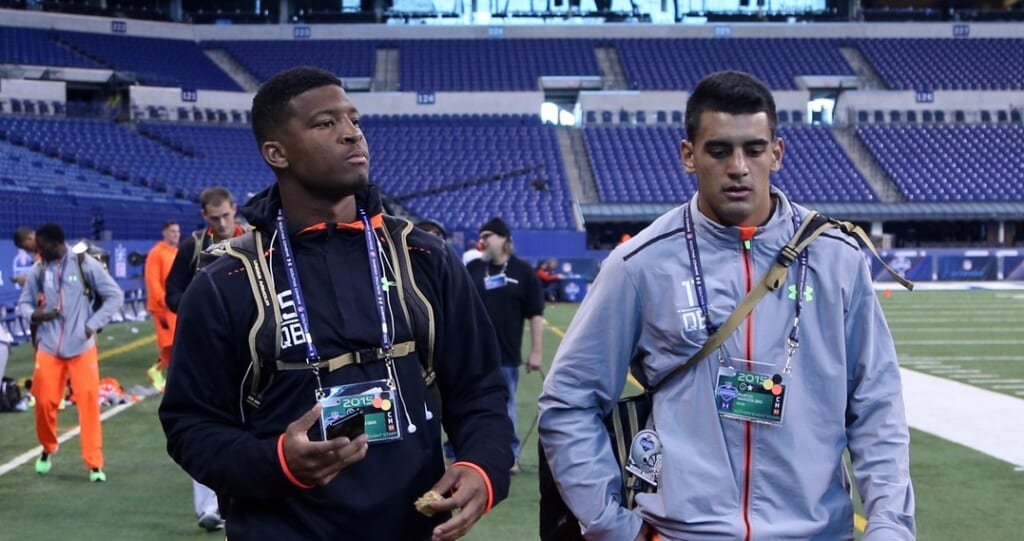 Courtesy of USA Today Sports: Tampa will take one of these QB’s No. 1 overall.

A two-win team in 2014, the Tampa Bay Buccaneers get the least-coveted prize in all of football—the first overall pick in the NFL draft. With it, it is highly likely they select Florida State quarterback Jameis Winston. If they don’t, they will take Oregon’s Marcus Mariota. The Buccaneers don’t have a viable quarterback on the roster (all apologies to Mike Glennon), which means either Winston or Mariota—and more than likely it is Winston—will be drafted with the No. 1 pick this year.

But a quarterback, especially a rookie, needs help. And that help isn’t just in the form of receivers with reliable hands or running backs capable of catching check-down passes. He also needs the assistance of his offensive line, and the Buccaneers currently possess one of the league’s worst.

Tackles Demar Dotson and Kevin Pamphile should not be starting at the position for Tampa or any other team. Replacing at least one of the two should be the Buccaneers’ top priority with their Round 2 selection. Depending on how Round 1 plays out, the Buccaneers could be in play for Oregon tackle Jake Fisher or Stanford’s Andrus Peat. They could also have designs on Miami’s Ereck Flowers or Florida’s D.J. Humphreys as well.

Later rounds should see the Buccaneers address minor defensive needs, such as defensive end and safety. They could also take advantage of the deep class of wide receivers and select a shiny new toy for Winston to play with a middle-round pick.