The offseason will reach its first landmark when the 2015 NBA draft arrives on Thursday, and all eyes will be on the Minnesota Timberwolves at No. 1 overall.

Will the T-Wolves take Jahlil Okafor? Or will they pass over the Duke product and instead select Karl-Anthony Towns, a top talent from powerhouse Kentucky?

The picks in the following mock draft are based on which direction the teams should head—at least in one writer’s opinion—not necessarily what will happen on draft night.

Sit back, relax and try your hardest to enjoy the mock draft.

Nikola Pekovic and Gorgui Dieng struggle to contribute offensively away from the rim, so Okafor would be a redundant fit. Towns, on the other hand, can slide out near the perimeter and knock down 18-footers.

Okafor simply doesn’t fit in Minnesota. That’s not a slight on the big man, because he has superstar potential. The Lakers would be smart to build around Okafor, especially since Kobe Bryant is entering what could be his final NBA season in Los Angeles. 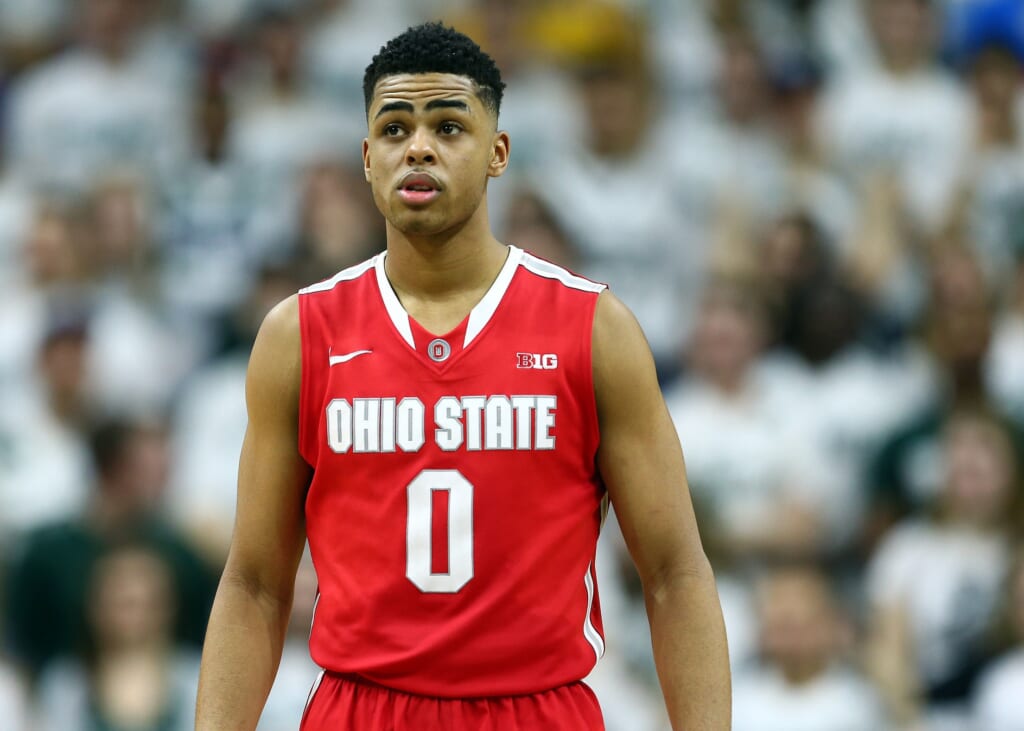 The 76ers must find a point guard soon, but D’Angelo Russell can slide down into that much-needed role. The left-hander can be the primary ball-handler in a Philadelphia offense that so desperately needs a backcourt creator.

Though Elfrid Payton and Victor Oladipo form a decent tandem, neither player has a consistent three-point stroke. Winslow would immediately offer a perimeter threat and has the makings of a terrific wing defender.

Darren Collison has the starting position locked down, but Emmanuel Mudiay can develop into the point guard of the future. While Mudiay will likely struggle early on as he adapts to the NBA’s speed, the one-time SMU commit should be ready to take over when Collison becomes a free agent in 2017. 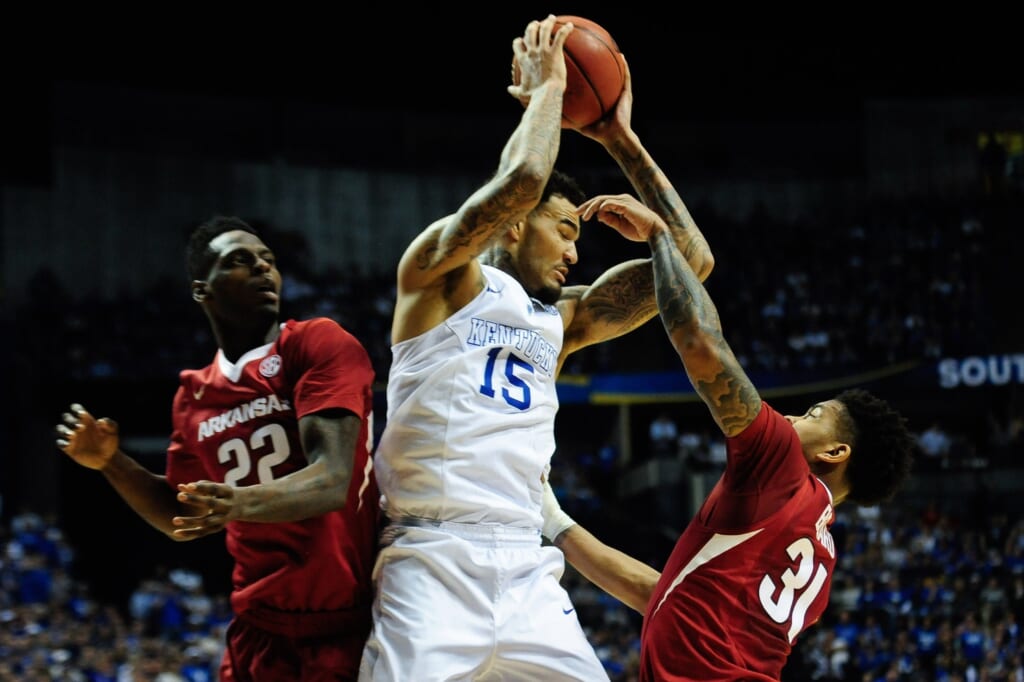 Courtesy of USA Today Images: Cauley-Stein doesn’t let many players push him around at the rim.

Denver traded Timofey Mozgov in January, so the frontcourt could use a rim protector. Christopher Dempsey of The Denver Post notes Cauley-Stein put together a solid workout for the Nuggets. He’s far from a polished product offensively, but Cauley-Stein’s defense is impossible to ignore.

The Pistons recently acquired a long-distance threat in Ersan Ilyasova, but Stan Van Gundy can always use another stretch-4 to open the paint for Andre Drummond. Porzingis connected on 17-of-37 triples during Eurocup action.

When Charlotte signed Lance Stephenson last summer, the front office presumably hoped he’d contribute as a three-point shooter. Instead, the Hornets signed someone who recorded the worst three-point percentage (minimum 100 attempts) in NBA history. Booker buried 41.1 percent from beyond the arc for Kentucky.

Play it safe, or take a risk? The Heat have typically drafted conservatively, but Johnson is worth the gamble. Although he’s not a polished prospect offensively, Johnson is a strong and versatile defender. Miami needs a boost on that end of the court.

Roy Hibbert is a decent center, but he’s not really an offensive force. Indiana could bring Kaminsky off the bench and let the National Player of the Year showcase his fantastic footwork in the post. While Kaminsky isn’t a dominant scorer, he’s a threat near the rim, in the mid-range and at the perimeter.

It wouldn’t be surprising to see Utah take Kansas small forward Kelly Oubre. However, Lyles would bolster a thin frontcourt behind Derrick Favors and Rudy Gobert. Lyles doesn’t have the “wow factor,” but the Jazz already have a budding superstar in Gordon Hayward. It’s time to give him some help.

Phoenix is absolutely loaded in the backcourt, but its depth up front is lacking. Turner is a stout shot-blocker and willing to provide offense from 20-plus feet, which means he complements Markieff Morris’ and Alex Len’s weaknesses of post defense and shooting range, respectively.

Perhaps Billy Donovan will reverse the Scott Brooks-engineered philosophy that saw Kevin Durant and Russell Westbrook inexplicably on the bench at the same time, but Payne would help eliminate that problem. Plus, if either superstar sustains another injury, OKC would be in capable hands with Payne at the point.

The Hawks may choose to utilize stretch-4 Mike Muscala more often next season, but that means they need a rebounding presence to back up Al Horford and replace Pero Antic. Of the 8.9 boards Portis averaged as a sophomore, 3.7 were of the offensive variety. His constant energy perfectly fits Atlanta’s style of play.

Value sometimes overrides need, but occasionally those concepts intersect. While Oubre is barely NBA-ready overall, his jump-shooting talent is better than anything else Boston has at the position. Plus, he’ll eventually be an upgrade over Jae Crowder and Luigi Datome.

Milwaukee appears content to build around Jabari Parker as the featured scorer, so adding Looney would bolster an already lengthy, defensive-minded squad. The 6-foot-9 power forward is also a threat on the offensive boards, considering he averaged 3.4 such rebounds last season.

Save for James Harden, the Rockets lack an off-the-dribble creator. Grant, a 6-foot-5 point guard, is an appealing prospect because of his vision as a ball-handler. Theoretically, Grant’s size allows him to scan defenses unimpeded, and his 6.7 assists per game suggests that, too. 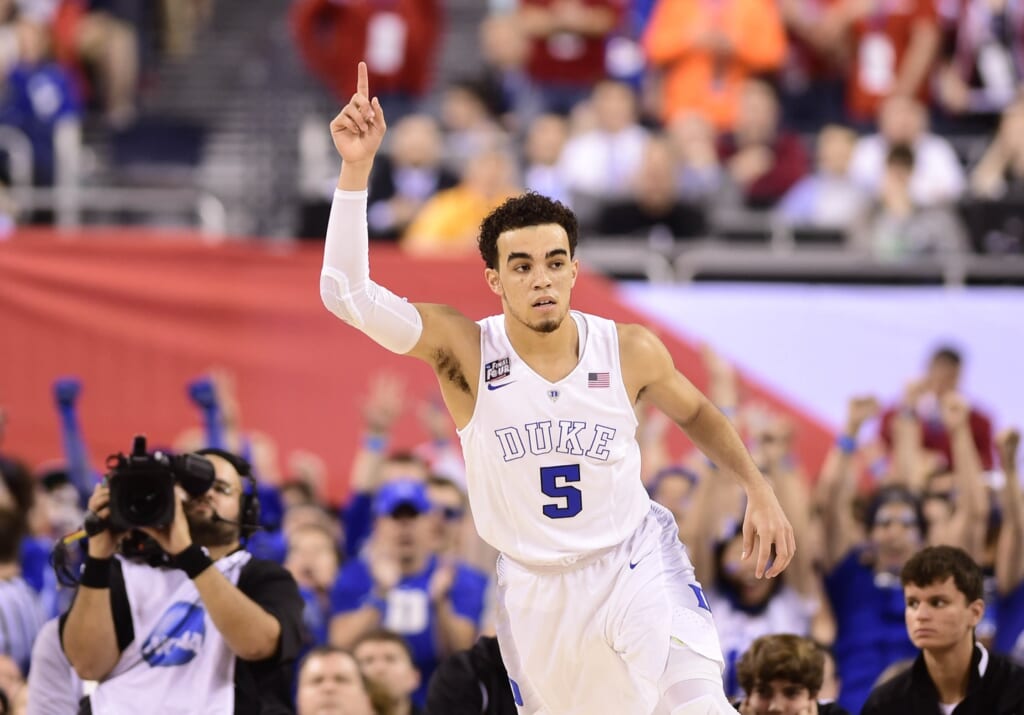 He won’t be a superstar, but the Wizards don’t need that from a backup point guard. Jones atones for his small stature by consistently making smart decisions with the ball. He’d offer Washington a sense of security behind All-Star playmaker John Wall.

Hollis-Jefferson’s strength doesn’t match what Toronto has loaded its roster with on the wings, but that’s a good thing. A Pac-12 All-Defensive team honoree in 2014-15, he’d provide what the Raptors needed more of from the trio of DeMar DeRozan, Terrence Ross and Lou Williams.

The Rajon Rondo experiment failed miserably, and the Monta Ellis era is likely ending. So, unless Dallas is content to let Devin Harris and Raymond Felton carry a defensively challenged backcourt, the Mavs should target a pesky point guard in Delon Wright. The 23-year-old snatched 2.3 steals per game at Utah and can join the rotation immediately.

Sooner or later, the Kirk Hinrich days will end in Chicago. That time should’ve already come, perhaps Vaughn will expedite the process. He scored from all over the court—both off the dribble and as a spot-up shooter—posting an average of 17.8 points last season. Granted, Vaughn dished just 1.9 assists per game, so he must adapt to a team-oriented style of play.

As for Christian Wood, I love his game but I feel like he needs another year or two to fully develop as an athlete and as an on-court talent

Robin Lopez could depart in free agency, and neither Chris Kaman nor Joel Freeland are long-term answers. At this point, Wood is the best available big. The 19-year-old needs to fill out a skinny frame before making a difference off the bench, but Kaman—who the Blazers have a team option on, per HoopsHype—could give Wood a season to progress while staying out of the spotlight.

Though it’s rarely simple to replace a pair of top-tier players, the Cavaliers’ depth was virtually nonexistent when Kyrie Irving and Kevin Love sustained season-ending injuries. James Jones was playing meaningful minutes during the NBA Finals. That’s just not right. Anderson is a versatile defender and strong three-point shooter—two skills that are ideal complements to LeBron James.

Slow and steady wins the race, but no three-pointers don’t win games. Behind the two-headed monster of Marc Gasol and Zach Randolph, Memphis is content to play at a molasses-like pace, which is successful during the regular season. But the Grizz are outmatched in seven-game playoff series because they can’t score often enough. Hunter would offer a critical three-point element to Memphis’ roster.

Dekker could sneak into the lottery, but don’t be surprised if he tumbles down the draft board. Dekker earned plenty of attention with an outstanding performance in the NCAA tournament, but his inconsistent shooting is a problem. San Antonio can afford to develop Dekker for a couple seasons, though his ceiling is likely a top reserve.

The Lakers need help everywhere, so safety shouldn’t be their concern this late in the first round. Terry Rozier is a streaky shooter, but part of that problem stemmed from him being the lone creator in the Louisville backcourt. Rozier is active on the glass and could be a solid reserve behind Jordan Clarkson.

Boston already has Kelly Olynyk to space the floor, so it can risk selecting an explosive post player in Harrell. The 6-foot-8 power forward is a prototypical “energy” guy, one who offers physicality and relentless energy rather than dominant skill.

The first-round series loss to Atlanta further exposed a massive hole in Brooklyn’s roster: shooting guard. With Vaughn and Hunter off the board in this scenario, the Nets would be forced to reach for Michael Frazier, a sharpshooter who needs to improve defensively.

Who better to take on a project than the defending champions? Martin oozes potential, but it’ll take patience—and a couple years—to develop him into the versatile stretch-4 he could be. Though Martin can score from all over the court, he’s inconsistent on both ends of the floor. But, if the pick pays off, Golden State will have landed an absolute gem.