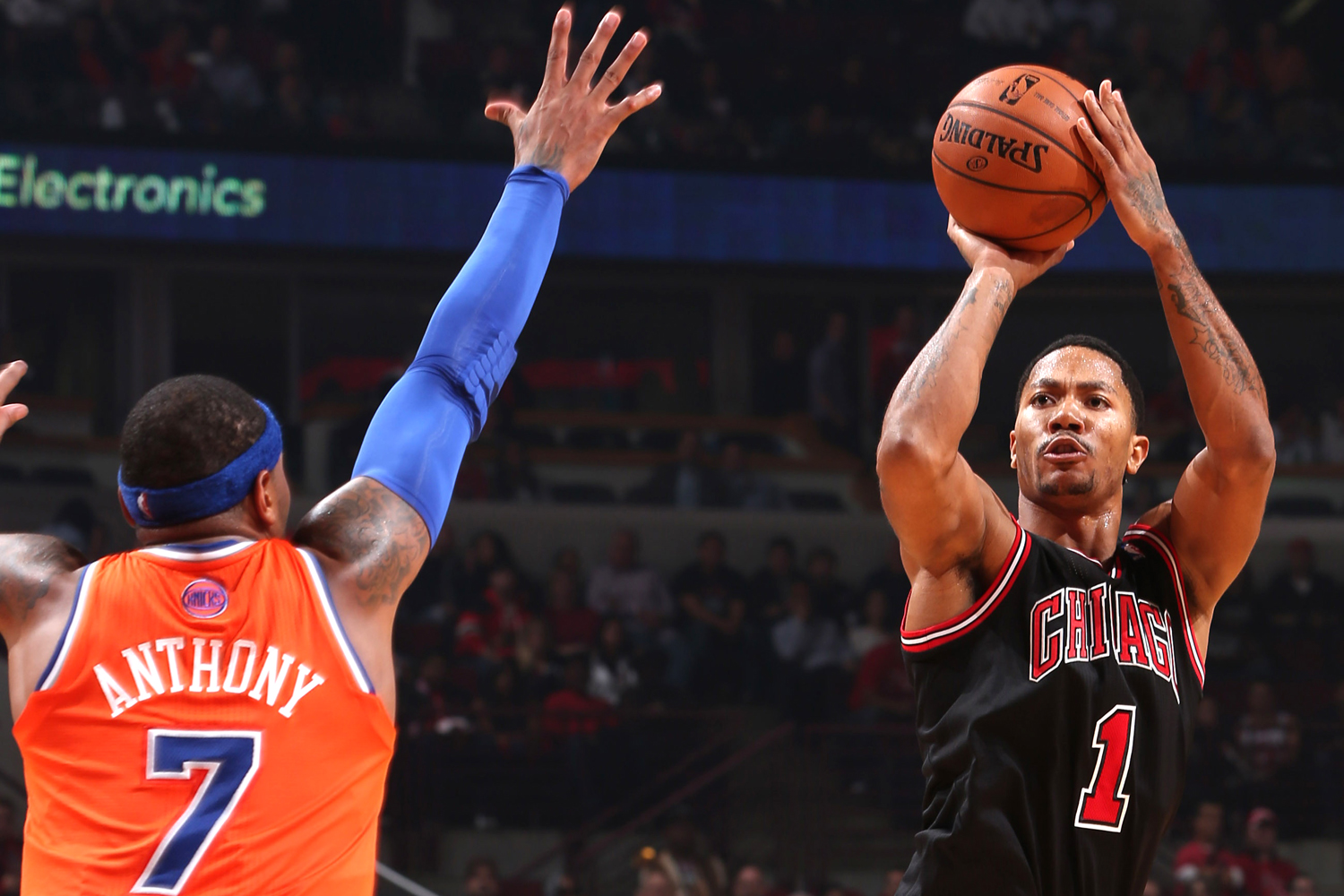 The 2014-15 NBA season kicks off on Tuesday. And when compared to the past few years, there’s more uncertainty than normal. There are big-name players in new places (looking at you LeBron James), players returning from major injuries (I see you Derrick Rose and Kobe Bryant), teams who are getting older, and teams who are maturing.

As much as we want to pretend the annual MVP award goes to the most “valuable” player in the league, it typically goes to the best player on the best team. No question, some players on this list are some of the most valuable players to their team.

However, I’m taking this approach: “If this team finishes atop their conference, this player will be the reason…thus a MVP favorite.”

If the Clippers are going to show the league they are serious title contenders, they’re going to need to do it soon. More and more trade rumors that include Griffin seem to swirl each offseason (whether they are true or not, we don’t know), and it’s possible the Clippers are concerned about the post “Lob City” era. If Griffin continues to improve his game, make those around him better at the same time, and get the Clippers to the top of the Western Conference, he’ll be a front runner for the MVP award.

There’s no arguing Curry’s value to the Warriors. He puts fans in seats, he knocks down implausible shots on a nightly basis, yet distributes the ball to his teammates to make the team more dangerous. Last year’s Warriors proved they can win. And with new coach Steve Kerr in charge, they essentially have the same team back for this season. If they can avoid injury, they will be tough to beat, and Curry will be the main reason why.

A long shot here, but while Beal and the Wizards flew under the radar last year during the regular season, they slowly put themselves on the map during the postseason with a first-round playoff victory over the Chicago Bulls. When asked, the average NBA fan will say John Wall is the best player on the Wizards’ roster. By the end of this year, they may have a different answer. The Wizards may be one of the best teams who haven’t hit their stride yet. And if that happens this year, Beal will likely be the main reason. What makes Beal an long shot, outside of the fact that he plays for Washington, is that he’s expected to miss the first month of the season with a wrist injury.

This is a make or break season for Rose. Everyone knows what a special player Rose can be when he’s healthy, but the Bulls are considered by many to be the best team in the East this year. With the additions of Pau Gasol as well as rookies Nikola Mirotic and Doug McDermott, the Bulls essentially are getting four key assets to a team that made the playoffs last season. If Rose does stay healthy and the Bulls win the East, Rose will be the one getting the MVP votes.

The Blazers are one of the most exciting teams to watch in the league. Lillard became a budding super star who is looking to blossom in to one of the leagues’ best players. He’s an all-around point guard who could lift the Blazers to the top of the West if they “take that next step.” Lillard is explosive, exciting and a fan favorite…which will lead to a lot of votes if things go the way everyone in Portland hopes they do.

Carmelo, Carmelo, Carmelo. What are we to expect from you this year? Last year, Carmelo had one of the best seasons of his career. The Knicks, however, did not. They missed the playoffs in a extremely weak Eastern Conference. This year, they made some roster adjustments by trading Raymond Felton and Tyson Chandler from the Dallas Mavericks.

Will the new roster equate to more wins? Perhaps. But Carmelo will need to mirror his numbers from last year if the Knicks expect to be taken seriously in an even more embarrassingly weak Eastern Conference. If the long-shot Knicks improve to be one of the top teams in the East, Carmelo will no doubt get serious MVP consideration.

Bryant and Lakers have, arguably, the lowest expectations they’ve ever had since Bryant arrived in Los Angeles. Coming off a series of serious injuries last season in which Bryant only played in six games, the Lakers were awful. After Gasol’s departure to Chicago, the hope for this season was to have a healthy Kobe and a healthy Steve Nash, and see where that leads. Whoops. Nash is already out for the season (perhaps his career) with back issues, so the realistic chances the Lakers make a ton of noise in the tough Western Conference is slim. That said, it’s Kobe Bryant we’re talking about. If, for some reason, the Lakers are relevant…he’ll get votes for most valuable player. And rightfully so.

As the aforementioned Lillard showed us last year, the Blazers are legit. Aldridge is a huge reason for that. Although he’s not as flashy and explosive due to his position, his stats are ridiculous. He may be as valuable to the Blazers as Lillard, so in reality, if both players stay healthy and the Blazers become the team to beat in the West, a case will likely be made that both deserve the MVP nod. Who knows, maybe we’ll see a co-MVP handed out to teammates. Stranger things have happened.

Perhaps the one player who will get to prove his value the most will be the reigning NBA MVP. After suffering a pretty serious foot injury, Durant will likely be out until late November. Many people will look to the Durantless Thunder vs the Durantful Thunder to calculate his value this season. But lets not kid ourselves here…Durant will always be an MVP candidate if the Thunder continue to be one of the best teams in the league. If he comes back from his injury as the Durant we’ve all come to expect, he’ll be a front runner for MVP.

The King. The Cavaliers. The obvious choice. LeBron in Cleveland immediately makes the Cavaliers a contender in the dreadful East. If the Cavs find themselves atop the conference when the regular season is over, there will be no question who will win the MVP. Something to watch, if you want to grade on value, is how well Kyrie Irving and Kevin Love play this year. Will LeBron’s all-around numbers improve? Will he make his teammates better as he often did in Miami? Lucky for you, every major media outlet will dissect the snot out of LeBron’s “return home.” Enjoy.