The 2015 NFL minicamps are all in the books. The next time we will see teams practicing together will be when training camps kick off in July.

Here is a recap of some of the observations what happened during these camps.

Unlike other big-name players who are holding out due to contract issues, Jones has no such intent. Playing out the final year of his contract, Jones stated this:

“I’m not going to hold out for anything. My teammates need me. I’m being selfish if I’m not here and doing what I need to do.”

Jones is confident a deal will get done, while indicating that he is just there to play football. Unfortunately, Jones’ statement does nothing to help the cases of fellow receivers Demaryius Thomas and Dez Bryant, who have yet to sign off on their franchise tags. 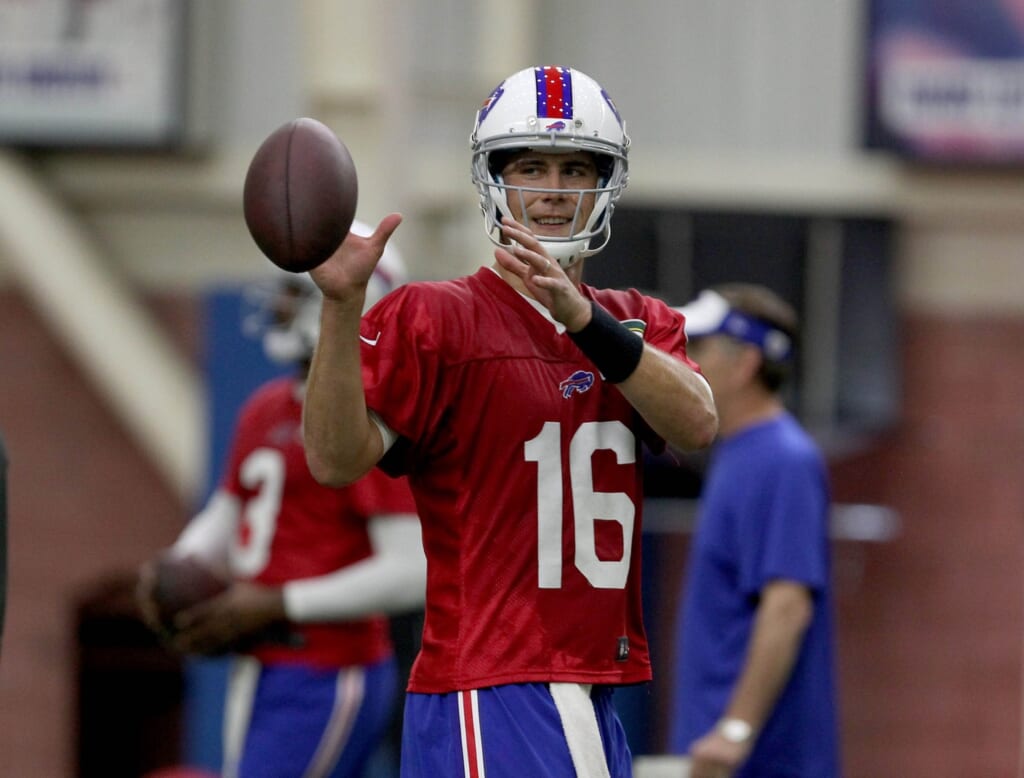 The Bills are holding an ongoing quarterback competition between Matt Cassel, EJ Manuel and Tyrod Taylor. After completion of camp on Wednesday, Joe Buscaglia of WKBW Buffalo indicated that Cassel put up a brutal performance:

“He was late on throws, he was inaccurate, and missed a deep throw to Tobais Palmer by about 15 yards (and that isn’t an exaggeration).”

It was also noted that Taylor and Manuel didn’t look much better. Unfortunately, this is pretty much the situation that Buffalo is in—three backup caliber quarterback vying for a starting job.

Benjamin reportedly arrived to minicamp eight-to-nine pounds overweight. He is also dealing with a sore hamstring. Head coach Ron Rivera speculated that the injury may be weight-related. Whatever the cause, the team downplayed the issue. A lot of diet and exercise should have Benjamin in better shape when the team starts training camp next month.

Due to the Bengals’ four consecutive one-and-done postseason performances, offensive coordaintor Hue Jackson stated this week that he is tired of the team being the brunt of jokes.

The franchise is on a 24-year dry spell without a single playoff victory. The pressure certainly remains on signal caller Andy Dalton, who apparently wasn’t on the same page with A.J. Green during camp.

Johnny Manziel Know His Role, Seems to Be Growing up

The second-year quarterback, who has apparently retired his “money sign,” knows his current role is as the Cleveland Browns backup.

#Browns Flip agreed with Pettine that if they lined up against #Jets right now, Josh McCown would be the starter.

It is up to Manziel, whom the Browns will trust to roam free during the next six weeks, to steer clear of trouble.

Dez Bryant Continues to Toy With the Dallas Cowboys

Bryant, who previously indicated that he might hold out into the season, did not practice with his team in minicamp this week. He was not required to do so since he is not under contract.

However, Bryant did make a last-second appearance on the final day of minicamp to listen to head coach Jason Garrett address the team. The day prior to his appearance, Bryant tweeted out that he is not being selfish by holding out.

Bryant’s cameo sighting on Thursday definitely left us with mixed signals as to where he stands with the team.

Is It Time for Joique Bell to Fear Ameer Abdullah in Detroit? http://t.co/3b6OZvgqnL pic.twitter.com/72W0p5F5PN

Abdullah was all the rave this week. If his level of production continues when the pads are on next month in training camp, he will likely give starting running back Joique Bell a run for his money.

Houston Texans Will Decide on a Starting Quarterback Before Training Camp

Preliminary reports are noting that quarterback Brian Hoyer looks to the favorite over Ryan Mallett to start in September. Additionally, it appears the team won’t drag the competition out over the summer and plans to name a starter prior to training camp.

Hopefully, Hoyer will be more impressive than he was during his starting stint with the Cleveland Browns last year. The veteran threw two touchdowns compared to nine interceptions in his final six starts with Cleveland. 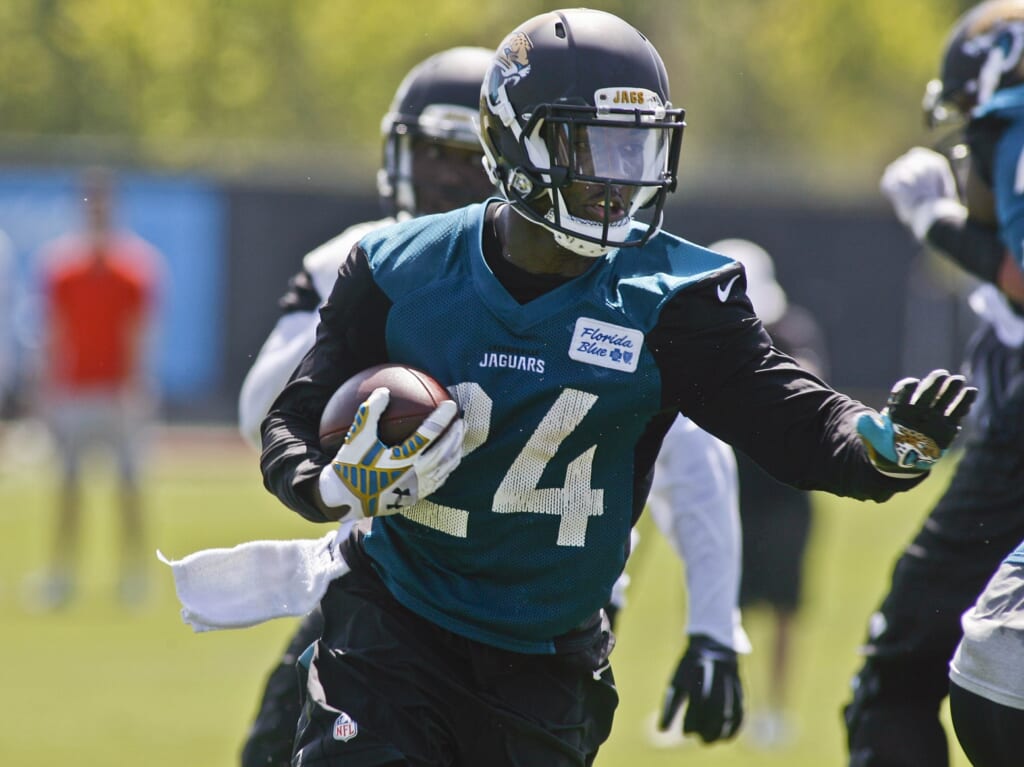 Rookie running back T.J. Yeldon looks like he will be an immediate contributor once the regular season begins. According to ESPN’s Adam Caplan, Yeldon could become the three-down back for a team who struggled in this area last year.

Wide receiver Allen Robinson also drew attention after returning from his injury-riddled rookie year. Quarterback Blake Bortles called the receiver “unbelievable” and said he will be a definite red-zone threat.

Alex Smith Is Having an Excellent Offseason in Kansas City

Smith is jazzed and claimed he is having the best spring so far since joining the Chiefs (via Fox Sports):

“It’s probably not even comparable to the last couple (springs), with the volume of football that we have (gotten in), especially offensively.”

It is also being reported that tight end Travis Kelce, who will be getting the ball more in 2015, is viewed as the team’s No. 2 receiving option behind Jeremy Maclin.

It was noted by ESPN’s James Walker that Tannehill performed consistently well during the team’s minicamp. This has not always been the case for the $96 million quarterback.

Additionally, second-year wide receiver Jarvis Landry was called the “most consistent playmaker at receiver this offseason” by Walker.

Butler was benched for most of the Patriots’ OTAs for showing up late. Now that he was able to participate in the team’s minicamp, it was reported he and Edelman took part in “spirited one-on-one” competitions. Despite Butler’s Super Bowl saving interception, he will need to continue to prove himself to get playing time in 2015.

Brandin Cooks continues to look like the best player not named Brees on the Saints roster.

Cooks is returning to the game after missing the last portion of his rookie season with an injured thumb. His speed and elusiveness in practice caught the attention of head coach Sean Payton.

Not only was Cooks turning heads, it was reported that C.J. Spiller looked dynamite as well.

Could things be looking up the Saints this season?

Odell Beckham Jr. is dealing with another hamstring injury that started bothering him towards the end of the team’s OTAs. Meanwhile, Victor Cruz is on the mend from knee surgery that cost him the final 10 games of last season. Both elite wideouts tossed around a few footballs and mainly observed their team practice from the sidelines.

A successful 2015 season for the Giants depends heavily on the health of their two star receivers. Hopefully both will be able to participate in training camp.

All the Philadelphia Eagles’ Quarterbacks Stand out in Practice 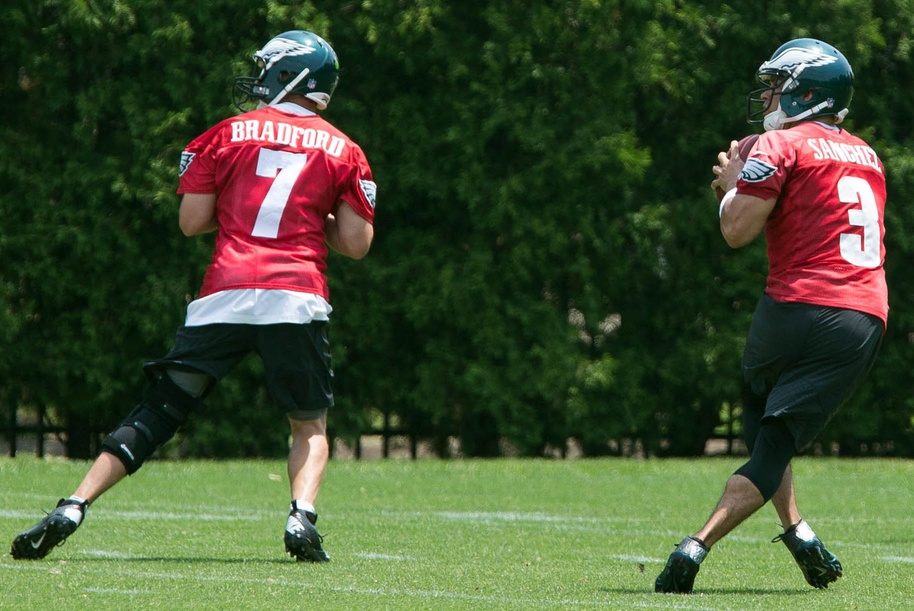 Courtesy of USA Today Sports: No guaranteed Bradford starts Week 1 for the Eagles.

Sam Bradford was still limited, but practiced in seven-on-seven drills, hitting up tight end Zach Ertz with some impressive passes.

Meanwhile, Mark Sanchez has been extremely accurate in practice. It was also noted that he didn’t throw a single interception during camp.

Even Tim Tebow, who Chip Kelly indicated is a legitimate contender for the starting job, gained notice. The quarterback was witnessed showing off his running skills responding to plays being called by the coaching staff.

While the general consensus is that Bradford will be the starter, both Sanchez and Tebow don’t seem to be willing to give up without a fight.

Both players showed up for the Seahawks’ one-day minicamp on Thursday after holding out from attending OTA’s.

Irvin said that the team’s choice to not pick up his fifth-year option will help him work harder this season. As for Bennett, he reportedly wants more money. However, that’s an unlikely scenario considering he still has three years remaining on his deal.

“He knows he’s not going to be Troy (Polamalu), but he can be a heckuva Shamarko Thomas.” He certainly looks the part.”

It is also reported by defensive coordinator Keith Butler that the team will “blitz more often” this year.

Winston is progressing well and took some snaps with the second-team offense while quarterback Mike Glennon practiced with the first team. This switch in routine serves as a reminder to Winston that the starting job won’t just be handed to him on a silver platter.

Marcus Mariota Is Advancing Faster Than Expected in Tennessee

.@1kendallwright: Marcus Mariota has "looked like a pro." He's confident and taking control of the huddle. pic.twitter.com/DBs1VSK7FQ

It was noted by head coach Ken Whisenhunt that his rookie quarterback is progressing more than expected at this point. Mariota also received praise from wide receiver Kendall Wright, who claimed the rookie “looked like a pro.”

This is encouraging news for a team that has nowhere to go but up.

Coming from a disastrous 2014 season where RGIII was mainly under center, head coach Jay Gruden noted the quarterback is “taking baby steps” getting back into the game.

Quarterback coach Matt Cavanaugh called RGIII’s performance at minicamp on Tuesday “easily” his best this offseason. Although, it was noted that the embattled signal caller wasn’t nearly as sharp on Wednesday.

The good news here is that Griffin is claiming he feels better than he has in two years. That’s big for Washington.