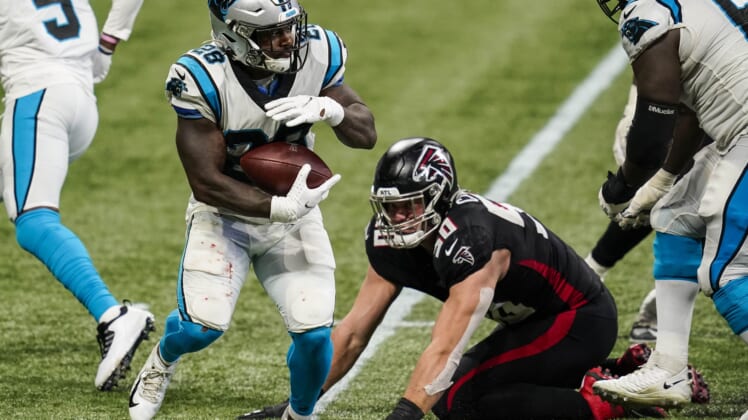 The Atlanta Falcons signed free-agent running back Mike Davis on Tuesday in the hopes of bolstering a rushing attack that finished 27th in the NFL last season.

As reported by NFL Network’s Ian Rapoport, Davis’ deal is only for two years and $5.5 million, which is a bargain for someone who had 642 yards rushing and 373 yards receiving for Carolina in 2020.

With quarterback Matt Ryan not getting any younger and balance desperately needed on offense, Davis presents a potential solution in the backfield. However, Atlanta can still make a couple additions on the open market to upgrade its roster.

Let’s take a look at some logical moves that could be next for Falcons general manager Terry Fontenot as the next phase of NFL free agency rolls on.

Injuries have plagued Short over the past two seasons to the point where he only appeared in a total of five games. That caused Carolina to part ways with the 32-year-old veteran, which has him on the open market searching for a new NFL home for the first time in his career.

But make no mistake: Short is an absolutely dominant interior pass-rusher when he’s right and healthy. There are obvious positional needs on the Falcons’ maligned defense that finished dead-last in 2020 against the pass. A top-flight edge-rusher would be nice, as would a No. 1 cornerback. Atlanta doesn’t have the cap space for either right now.

Instead of breaking the bank and having to do some salary cap gymnastics to move money around more than is necessary, a one-year flier on Short makes a lot of sense. He’d be playing alongside Grady Jarrett, one of the best pure interior defenders in the NFL. They would create absolute havoc from the inside and leave opponents in difficult spots.

Fontenot was in the New Orleans Saints’ front office for years before taking the Falcons’ GM gig. He’s very familiar with Short’s work, which was highlighted by an 11-sack campaign in 2015.

This is also a new coaching staff in Atlanta led by Arthur Smith. New defensive coordinator Dean Pees loves scheming up exotic pressures, which will take some heat off the Falcons’ edge defenders, and that would bode well for the types of stunts Jarrett and Short are capable of executing.

This doesn’t feel very original, but why alter the strategy of plucking quality players from division rivals? Sticking with Carolina’s castoffs, Boston could stay in the NFC South by becoming a starting safety in Pees’ new-look Atlanta defense.

Boston didn’t do well in Pro Football Focus’ grades last year (78th out of 94 qualifiers), yet he was among the better and more underrated safeties in the league for the three seasons prior to that. Still only 28 years old, Boston was on a young Panthers team that was rife with rookie starters, which could’ve played a role in hindering his individual PFF grades.

The complexity of Pees’ defense, which has evolved in stints with the Baltimore Ravens and Tennessee Titans, is something Boston can pick up. Considering the team let go of Ricardo Allen and saw Keanu Neal exit in free agency, there’s a dire need for Atlanta to find a viable veteran to patrol the back end. Erik Harris isn’t going to get the job done alone.

Considering he initially signed a three-year contract with Carolina only to be released after one season, you can bet Boston is motivated to prove the Panthers wrong. What better way to do that than by playing against them twice a year? What’s great about Boston, too, is he can play either safety spot, which gives Pees even more flexibility in terms of deploying different personnel.

Signing both Short and Boston would go a long way in ensuring the Falcons fare far better as a pass defense in 2021, and won’t put so much of a burden on rookies to shoulder the burden of upgrading the unit.

While Atlanta could still be considered a rebuilding team, perhaps Davis’ all-around skill set will allow Smith’s run-first offense to thrive, and give the defense longer rests. Having said all that, in order for the Falcons’ D to capitalize on that added rest, they’ll need bargain vets like Short and Boston to fill out the top of their depth chart, because as of now, there’s not a lot of reason to believe that even Pees can cure this outfit.