What if the NFL wasn’t as powerful as we’ve been led to believe? What if a new league, spearheaded by elite players, was able to generate enough public interest to become a viable, long-term alternative?

We discussed this idea last week in an article entitled “Could fantasy football eventually lead to the decline of the NFL?”

The general gist revolves around the idea that a new generation of sports fanatics is disinterested in team loyalty and more interested in player loyalty, thanks in large part to the uprising in popularity of fantasy football. Essentially, at some point, it might behoove the most powerful athletes in the world to create their own league, centered around fantasy football (quickly becoming one of the most lucrative businesses in America).

There are many questions that would need to be answered before such a venture would be possible, such as stadium funding and league structure. One idea would be to give the players a piece of the league itself (2% each) and 25% ownership in their respective franchise. The league would certainly draw a ton of interest from Silicon Valley, Wall Street, and Media company investors.

If the stars aligned and these men could get out of their current contracts, potentially break away from the machine that is the NFL to start a league of their own, this is how we see the core ownership/franchise player shaping up.

(in order of market size)

Would the NFL’s Patriots fans be mad as hell that Gronk is playing in New York? Oh yeah, yet he’s a New York state guy and all Gronk does is catch touchdown passes. Seriously. Taking into account the injuries that caused him to miss time, he’s caught 54 touchdowns in essentially four full seasons. That’s insane. The guy plays his heart out on the field and has the talent, drive and determination to become the best tight end in the history of the league before he’s finished. 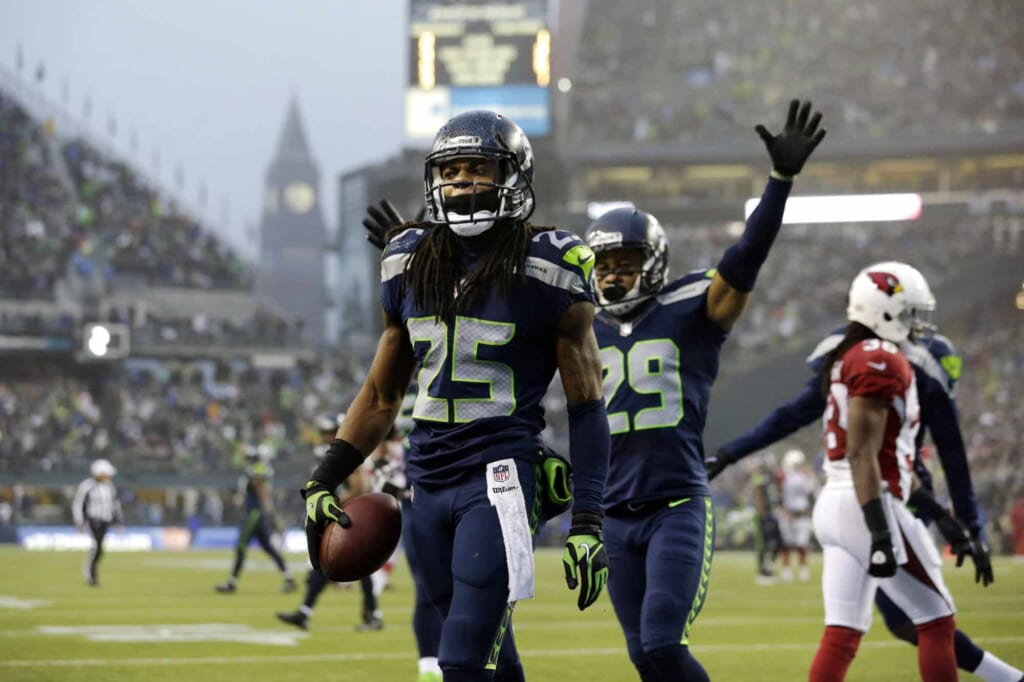 Sherman is straight out of Compton in southern Los Angeles and he’s the man to bring football back to LA. He is also one of the most polarizing, successful and electric stars in the NFL. Everywhere he goes, every time he says something, people stop and listen—whether they like him or not. He’s one of the biggest superstars in the sport and would be a tremendous keystone defender to feature in a new league.

Purdue ain’t that far from Chicago, and Brees still has plenty left in the tank. This diminutive signal-caller has done nothing but blow NFL secondaries up the past decade and is a natural-born leader. For most, passing for 5,000 yards is nearly impossible, but Brees has hit that number four times in his stellar career—three more times than any quarterback in NFL history.

Fantasy football revolves around running backs, and there aren’t many as talented as Murray. Though he’s been hindered by injuries early in his career, the power back showed the world what he can do last year. And the best is yet to come. His no-nonsense, smash-mouth style of running fits Philly to perfection.

It doesn’t matter which team you root for, most people who love football have to appreciate the passion and fire that drives Bryant. He’s still developing his game, which is phenomenal, and has prototypical size, speed, hands and athleticism. Bryant is worth the price of admission every single week and can produce against the best competition the NFL has to offer.

Best. Quarterback. In. The. World. And he goes home to Northern California.

Rodgers drops dimes on dimes. Not only is he accurate, but he has a hose and can run better than most. If any new league were being developed, he’d be one of the first men to call.

He’s a true champion who knows how to get the most out of any team, and he’s one of the best in the business at putting touch on his balls. He’s going to put the football where it needs to be when it needs to be there. As he’s proven throughout his career he can make even bad receivers look good and knows how to win under difficult circumstances.

Jones is one of the most dangerous receivers in the NFL right now. He’s equally effective taking a five-yard slant the distance as he is streaking down the sideline for a 50-yard bomb. One of the most underrated route-runners in the league because of his freakish athleticism, Jones stands alongside Calvin Johnson and Dez Bryant as the most complete receivers in the game today.

Born in Washington DC, this young man comes home. There isn’t a young quarterback in the league to compare with Luck, who has a legitimate chance to challenge all the record books if he stays healthy throughout his career.

Luck has a cannon for an arm and possesses the same gun-slinger’s mentality that made Brett Favre so entertaining (and maddening, at times) to watch. Indianapolis is going to challenge some individual season passing records this year under his leadership.

Watt is THE premier defender in the NFL, and quite honestly the best player at any position in the league. He can play offense and defense, dominating both sides of the ball, and can score just as well running a fade route as he can strip-sacking a quarterback in the end zone.

And for good measure, there isn’t a more wholesome superstar in the entire world. His image is squeaky clean and pretty much everybody and their mothers loves him.

Megatron must be included in this list. While he doesn’t possess the softest hands in the league, he more than makes up for it by possessing a Greek-God physique and the speed of a track star. Johnson makes big plays between two and three defenders on a regular basis and when healthy is the preeminent receiver in the NFL.

One of the biggest defensive stars in the game, Peterson knows how to handle the heat of the Arizona desert. He also knows how to shut down top receivers, and now that his blood sugar is under control, he’s set to show us another level of excellence.

Dual-threat quarterbacks who can throw as well as any pocket passer are pure fantasy gold. Wilson is a modern-day Steve Young-type player who is still very much on an upward trajectory in his career. And, based on the way he was able to leverage a new contract out of the Seahawks just before camp opened last week, he’s clearly a power player in the NFL.

Peterson, at the age of 30, is ancient as it relates to the average life span of an NFL back.

However, even now, he’s unrivaled in the NFL—all other running backs are No. 2 or lower. This is why the Vikings were willing to hand over gobs of money to Peterson this offseason to keep him happy in an age in the NFL when the running back position is continually being devalued.

One of the most bankable stars in the world, Manning must be featured on this list. “The Forehead” is known throughout the world and is one of the most consistent fantasy quarterbacks in the league. In addition to his passing prowess, the great field general would be invaluable to attract investors to the new league.

Roethlisberger is like a fine wine that gets smoother and better with age. He’s a grizzled old vet compared to some of the athletes on this list but can throw the ball like a 23-year old fresh out of college. Any offense under his guidance with speedy wideouts is going to explode for yards and points.

If the new league is going to embrace the future, it has to embrace Las Vegas —a destination site and the ideal league Championship Cup location.