Not all NFL players get the recognition or the contract they rightfully deserve for what they bring to the table on game day. Said players often slip under the radar, and do not typically come up in discussions around the office water cooler.

Instead, guys like New England Patriots quarterback Tom Brady and Pittsburgh Steelers wide receiver Antonio Brown get all of the attention and fuss. Enough about these two already.

Let’s talk about players who definitely deserve more love from their fans, or perhaps more consideration from their very own teams. 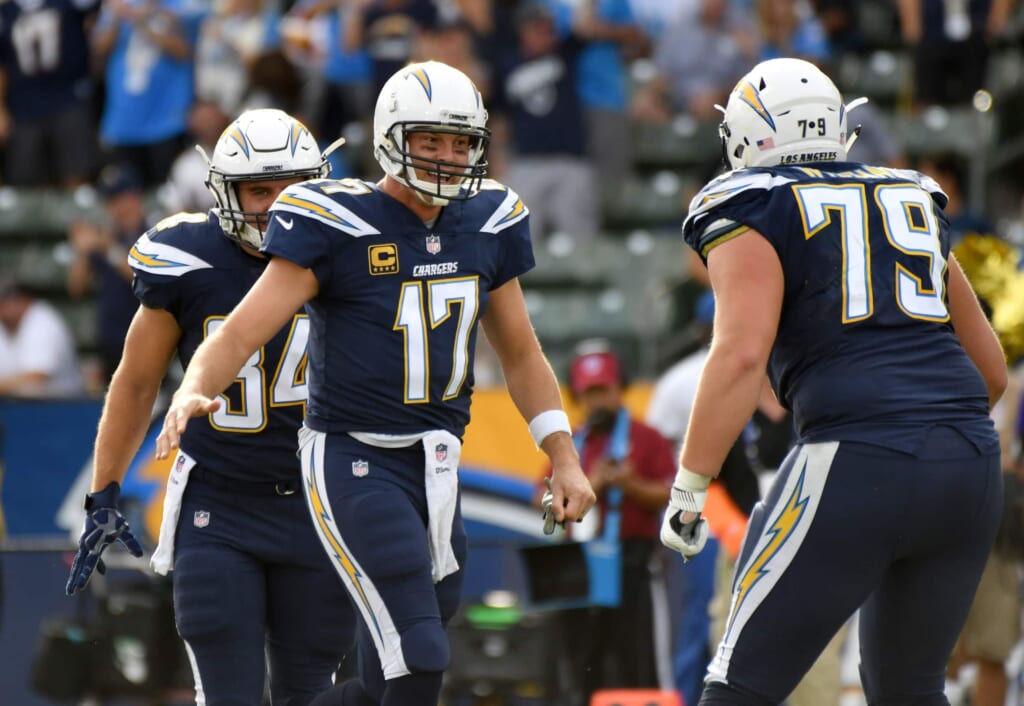 It is time to give this seven-time Pro Bowler, and father of eight, more accolades, folks. Rivers has yet to miss a game since taking over for Drew Brees as the Chargers’ starter in 2006. That makes for 196 consecutive contests, which is darn impressive. Speaking of impressive, Rivers ranked No. 2 in passing yards last year, throwing just 62 less than the above-mentioned Tom Brady. But, nobody is talking about that as Rivers now makes his ridiculous commute from San Diego to his new practice facility 75 miles away.

After just slightly missing the playoffs last year, look for Rivers to continue putting up solid numbers once again as the Chargers push for their first postseason appearance since 2013.

Graham is coming off an excellent campaign that saw him record a team-leading and personal-best 9.5 sacks in 2017. Then, he topped this off with that famous strip-sack of Brady in the Super Bowl. Yet, the only guy with the last name Graham on NFL.com’s Top 100 Players of 2018 list was new Green Bay Packers tight end Jimmy Graham.

Riding his own hot hand, Graham is seeking a lucrative contract extension while he plays out the final season of his four-year, $26 million deal. If the Eagles won’t pay him, surely another team will providing his star continues to point up in 2018.

After playing for four seasons sharing the backfield with Duke Johnson in Cleveland, Crowell will look to embrace a larger role with the Jets. The team trusted his talent enough to commit to him for three seasons. This came after he averaged 4.2 yards per carry and scored 22 total times in four seasons with the Browns.

Crowell should carve out a bigger name for himself as he takes on the early down work, spelled by veteran Bilal Powell. He might even see more handoffs if it winds up that the young Sam Darnold finds himself under center. Either way the quarterback situation sorts itself out, Crowell will inherit a very prominent role on offense. 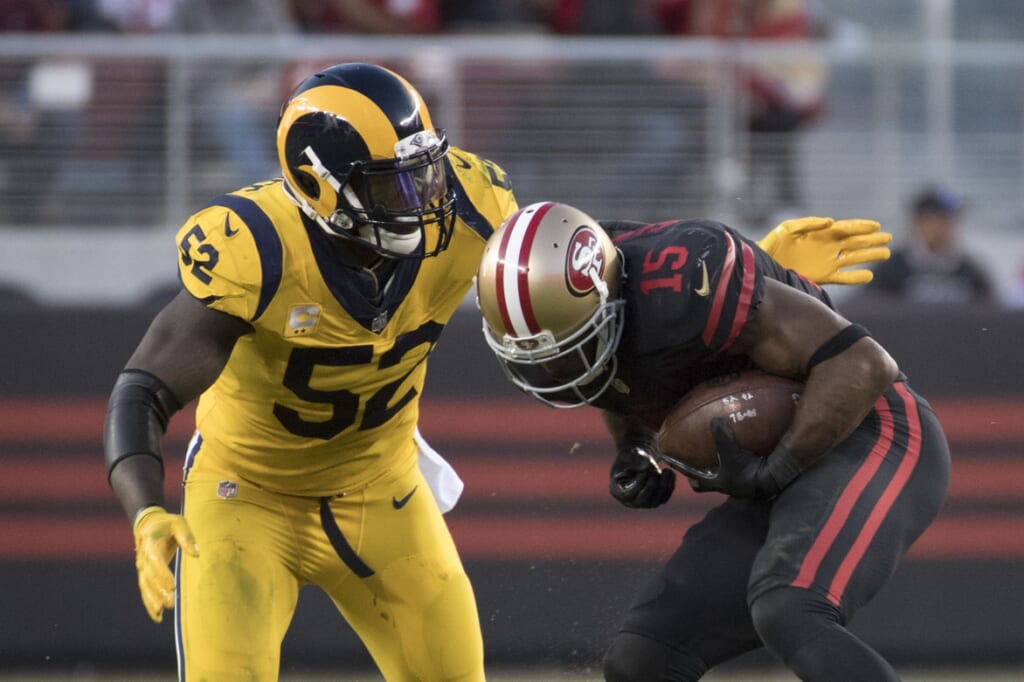 Originally drafted by the Indianapolis Colts in 2008, Garcon seems like he’s been in the league forever. Though at 31-years-old, he gets little recognition among other receivers near his same age. Garcon should see the spotlight more while he benefits from playing a full year with quarterback Jimmy Garoppolo in 2018. Before Garcon’s injury last year, he was on course for a 1,000-yard season. He didn’t play a single game with Jimmy GQ.

Prior to this, Garcon racked up 1,041 yards and caught 69.3 percent of the passes thrown his way for the Washington Redskins in 2016. His veteran experience makes him a stand out in a big way.

Fuller landed on Kansas City after a grand sophomore year in the nation’s capital that saw him record 10 passes defended and four interceptions while yielding a 55.0 passer rating. According to Pro Football Focus, this marked the lowest passer rating allowed by any slot corner in the league.

Fuller will now test his talents in a Chiefs secondary that desperately came up short last season. With his new team, Fuller should make an immediate impact as he attempts to earn his stripes among his new teammates.

Coming off of a crappy one-year gig with the Buffalo Bills, Matthews has an intriguing new team to call home. This former Philadelphia Eagles second-round pick might just turn some heads catching passes from the GOAT. At least, we would like to hope so, as Jordan is penciled in as a starting receiver opposite of Chris Hogan.

He never quite topped 1,000 yards during his four seasons of play thus far. But, Matthews has maintained an average catch rate of 66 percent. Brady is a huge upgrade over any other quarterbacks Matthews has caught passes from in the past. Let’s watch and see how Matthews responds to an expertly-coached Pats offense. 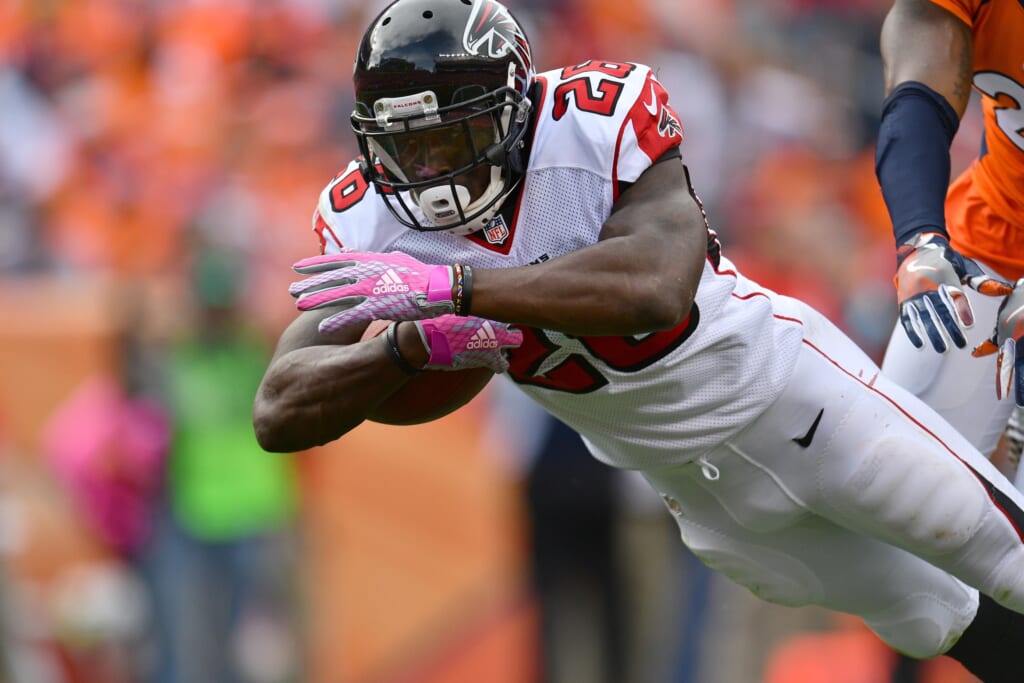 Buried behind running back Devonta Freeman, Coleman has primarily been a change of pace back. Entering the final year of his rookie contract, Coleman has recorded 1,540 rushing yards and 14 rushing touchdowns.

But, where we are going to see more of Coleman this fall is in the passing game. Those who play fantasy football and receive points for receptions might want to take note. Coleman was targeted 39 times, resulting in 27 catches for 299 yards and three touchdowns last season. These numbers will be on the rise if the Falcons stick to the plan of giving Coleman more snaps. Other teams should observe this, as Coleman could be headed to free agency next spring.

After leading his team to the playoffs, passing for the eighth-most yards and completing 67.5 percent of his passes, Smith got snubbed in the NFL’s Top 100 Players of 2018 list. Talk about a slap in the face. Not only did the league’s players not vote for him, his former Chiefs team was quick to trade him once the Pro Bowl was barely over.

Smith will now work with a Redskins offense that at times did their former quarterback Kirk Cousins no favors. Whether Smith can help turn his new offense around or not, he clearly deserves more respect. He last threw for 26 touchdowns versus five interceptions which represented the lowest interception percentage in the league.

Another player who did not make that Top 100 list is Flowers. He is New England’s best pass rusher, having tallied 6.5 sacks last year. Flowers was also the Patriots’ highest-graded player in the Super Bowl as well as the second-highest graded player on their defense last year. This is according to stats compiled by Pro Football Focus.

The former fourth-round pick from 2015 is easily becoming a rising star who will command more focus moving forward. The upcoming season will be a contract year, which means Flowers has a chance to earn a lot of cash.

Rudolph gets his fair share of attention, but he should be deserving of even more love this season. He’ll be working with a new quarterback who loved targeting his tight ends throughout his three seasons starting for Washington. Just ask Vernon Davis and Jordan Reed.

This is enough to believe Rudolph may become one of Cousins’ favorite targets moving forward. He could easily build on the 532 yards and eight touchdowns the tight end gained in 2017. 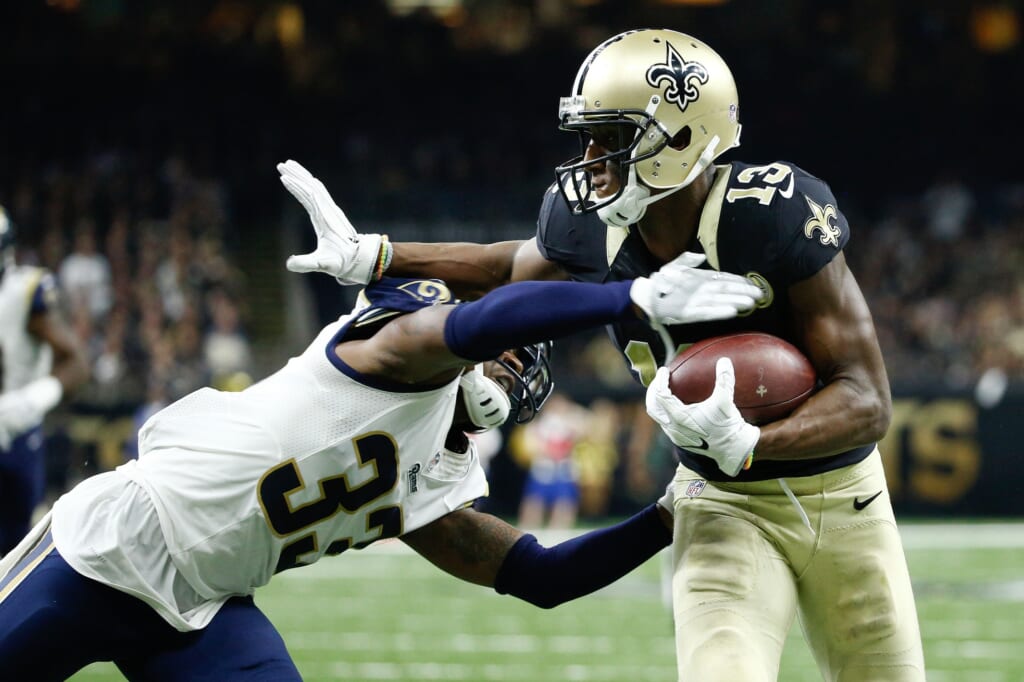 Thomas flies under the radar and doesn’t attract nearly the high regards as some of his other teammates. While running backs Alvin Kamara and Mark Ingram were stealing the show in 2017, Thomas made some awesome plays. Heck, he finished with 104 receptions for 1,245 yards and five touchdowns.

Quarterback Drew Brees is not going to stop targeting Thomas anytime soon, especially with Ingram sidelined the first four games of the season. The 25-year-old receiver is an elite player in the making, and should be considered as such as his career evolves.

White made some fantastic plays in his rookie year, including a famous interception on a pass intended for Patriots tight end Rob Gronkowski. Unfortunately, White got pummeled by Gronk when the jumbo-sized tight end lost his cool. Nonetheless, White survived and started the entire 16-game season, nabbing 18 passes defended, four interceptions and a touchdown.

The former LSU star and 27th overall pick only stands to up his level of play. He may not have made a recent top-10 second-year players list published on NFL.com, but he makes our list as an up-and-coming corner who is definitely a star in the making.

As a No. 1 receiver on a team, he deserves more acknowledgement. Baldwin has missed only two games in 110 possible contests, and has averaged 1,063 yards over his past three seasons. He also has scored 29 times and has maintained an average catch rate of 71.9 percent during this span.

Yet, he often goes underrated. Moving into 2018, Baldwin should consume the most targets without tight end Jimmy Graham and wideout Paul Richardson around. Let’s just say it would be a shock if veteran Brandon Marshall stole any of Baldwin’s thunder. 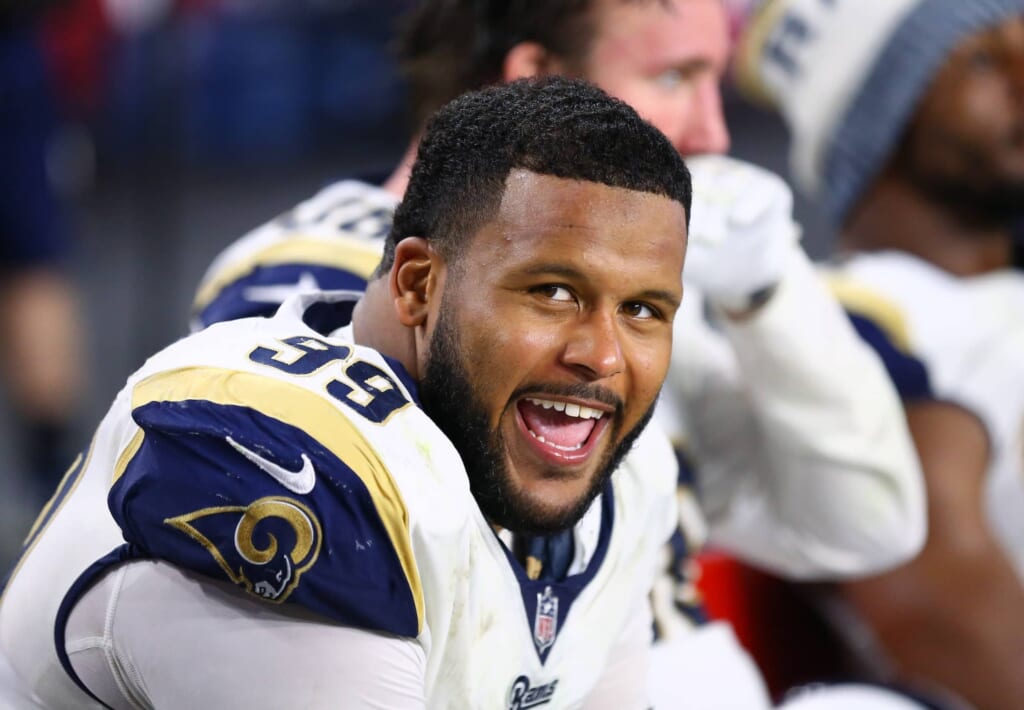 Donald is getting the cold shoulder from a team that intended to make him the highest-paid at his position last year. That didn’t happen. Donald has since held out of all of the Rams preseason practices. As the reigning NFL Defensive Plyer of the Year, Donald deserves to get paid.

But instead, the Rams have been busy taking care of other team needs at other positions, leaving Donald’s contract situation in flux. Donald is on course to earn a mere $6.892 million. It is high time for the Rams to take care of Donald financially.

As one of the most under-hyped receivers in the NFL prepares to play out his final contract season in Detroit, Tate is worthy of major kudos. Tate has been Mr. Reliable when it comes to targets and receptions since signing with Detroit in 2014. He has averaged 131.8 targets, 93 receptions and 1,056 yards per season. Not to mention, Tate’s average catch rate is 66 percent.

Though, the Lions have not had any serious talks about extending his contract. Despite this situation, Tate seems to keeps a positive attitude as he takes each season one year at a time. The same cannot be said for some other NFL players in similar situations.

Given the excellent chemistry between Tate and quarterback Matthew Stafford, the Lions would be wise to keep him in Detroit for at least a few more years.