Risk is something teams have to weigh during every single NFL draft pick, every single year. There’s always some uncertainty associated with making these selections, which have the potential to alter lives, and franchises.

Obviously some players bring more risk to the table than others, for various reasons. Some have red flags due to injuries, others for off-field issues, and some are just very inexperienced.

For the purposes of this list, we’ll be focusing on the top-15 riskiest NFL draft prospects this year.

There are two main factors teams have to consider when looking at Rosen to potentially come in and become the face of the franchise for the next decade plus. First, is he “mature” enough to handle the job? That’s a question that’s been asked about Rosen since he even entered UCLA, and at this point it really seems NFL people are split on the answer. The second issue is he’s been injury prone in college due to the fact he’s not very mobile, and he got hit a ton playing behind a porous offensive line. Perhaps these reasons are why, of all the top quarterbacks in the draft, some see Rosen as the guy most likely to fall.

The big issue with Key is pretty much all about his off-field red flags. He recently divulged to NFL teams that he took time away from LSU last year to enter rehab for marijuana abuse. And based on how players with this hanging over them in recent years (like Randy Gregory and Reuben Foster) have done in the NFL that’s not reassuring. When he’s healthy and in football shape, Key is a terror off the edge — he had 11 sacks in 2016. But these off-field concerns are sticking to him like glue, and he could slide big time because of them.

Hamilton is a very intriguing player whose stock is soaring heading into the draft. He’s an exceptional route runner who already displays more polish in this area of his game than many professionals. He also has nice size (6-foot-1 and 205 pounds) and is good after the catch. So why is this young man being featured as a risky prospect? It’s all about the hands, man. Hamilton has serious concentration issues that cause him to drop passes, and no matter how skilled you are at the NFL level, that’s not something coaches will tolerate long term. 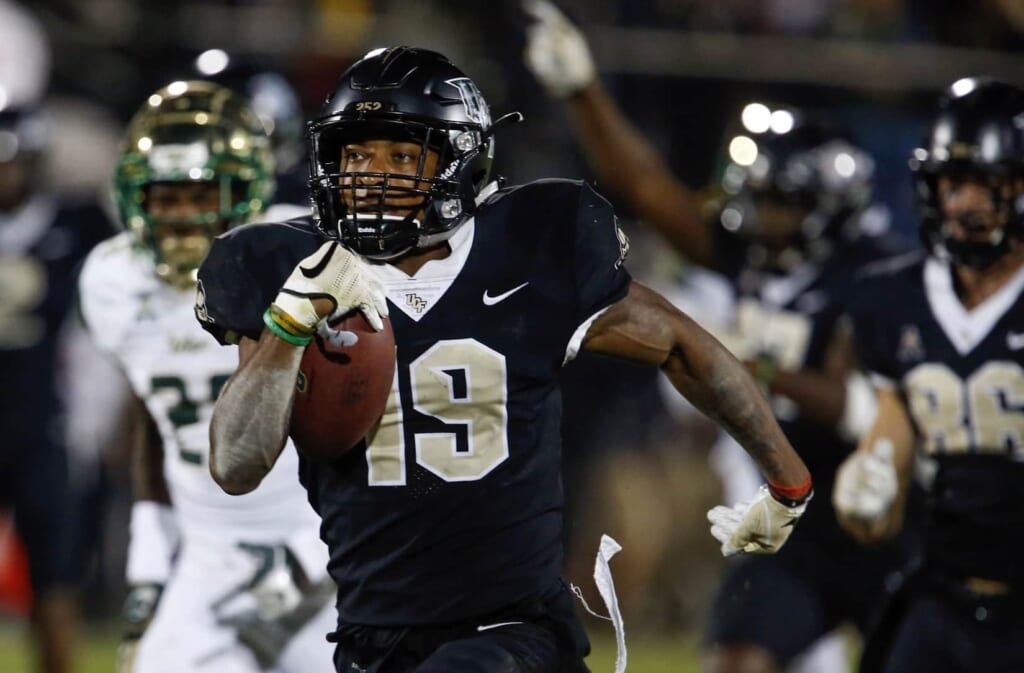 A late addition to our list, Hughes enters the draft with a black cloud hanging over his head in the form of a sexual assault allegation from 2015 during his stint at North Carolina. Teams are reportedly looking hard into this, per NFL Network’s Tom Pelissero, who spoke with Hughes about it.

“Obviously, I have to tell them everything that happened and everything that went into why I left and also what I’ve learned from it,” Hughes said. “What I tell teams is that they won’t have any issues with me if they draft me. I haven’t had any problems with the law or anything since I was at North Carolina.”

A player who could be selected in the first round based on talent alone, Hughes could see a draft-day free fall if teams aren’t convinced he has good character.

Looking at Scarbrough, it’s all about whether he can actually become a productive runner at the NFL level. He’s a big-name player from Alabama, but it’s worth noting he never could wrest the starting job away from Damien Harris and struggled to stay healthy. Scarbrough also is a big, upright runner who lacks the speed to get around the edge and the wiggle to avoid would-be tacklers. And for all his size he’s not exactly going to scare defenders away from taking him head on. Given the wealth of talent at this position in the draft this year, there are other guys out there I’d take ahead of Scarbrough.

In terms of pure, raw talent, Sweat is in a class all by himself this year looking at pass rushers. His performance at the combine was eye opening, to say the least, and this is a young man who has the physique teams (6-foot-4 and 251 pounds) covet out on the edge, with room to grow. The reason Sweat is so risky is that, because of his raw abilities he’s likely to be overdrafted by a team that hopes it can coach him to become productive. Because, based on tape, he’s got a long, long way to go, and his college production was minimal. You’d expect a guy with his gifts to dominate, yet Sweat only managed 14.5 sacks in 35 games at Florida State.

Looking at Chark, one envisions a guy who can take the top off a defense and dominate on play-action passes. He’s got nice size at 6-foot-3 but is pretty slight at 199 pounds. The young man can straight up fly, running a 4.34-second 40 at the combine. That said, he’s not a polished route runner, doesn’t track the ball very well on deep throws and isn’t very strong off the line of scrimmage. Chark has great tools, but he could end up being a one-trick pony who’s not very great at the one trick.

In almost every area, Vander Esch has check marks next to the most important things teams look for in a top prospect. He’s big (6-foot-4, 256 pounds), has great athleticism and produced at a very high level, especially last season at Boise State. However, there’s new information coming out that teams are concerned about injuries. According to ESPN’s Chris Mortensen, some teams have “flagged Vander Esch” for a neck issue that showed up in his combine medicals. Thor Nystrom of NBC Sports also added recently that his “medicals include a concussion, a pinched c-spine nerve and a minor LCL knee injury.” It’s going to be interesting to see where this young player ends up landing, in light of this information. 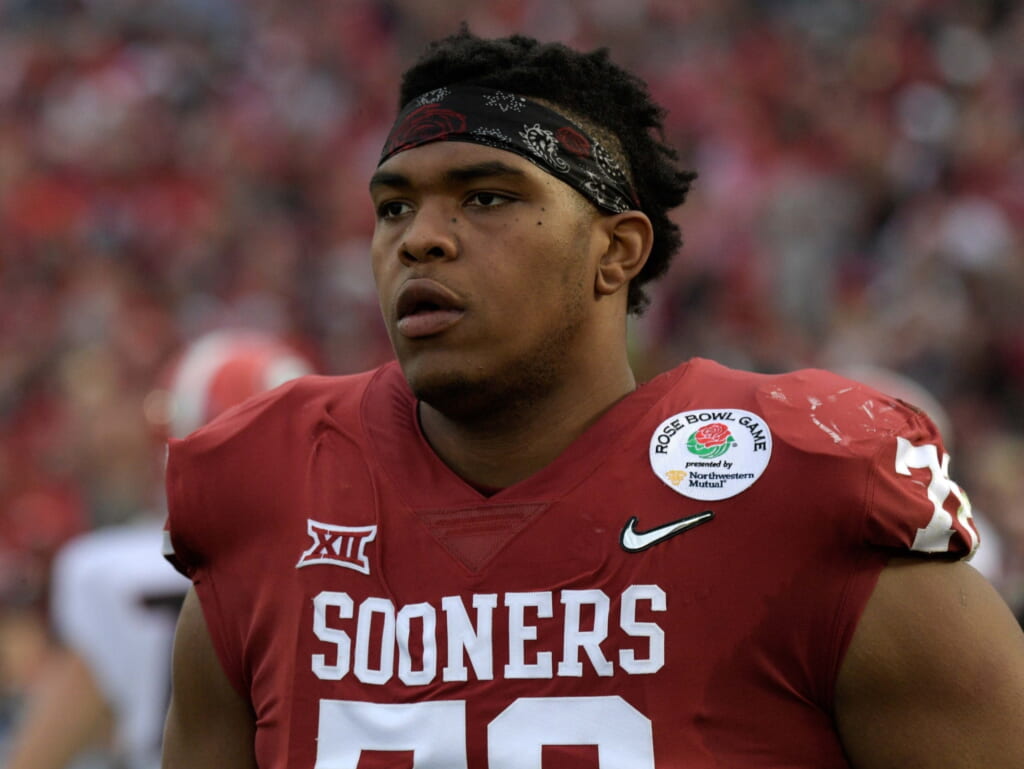 If you’ve been following the pre-draft process, then you’re likely aware of Browns’s combine debacle. He put up historically bad testing numbers and was yelled at by coaches on the field for loafing. It was really an awful look, and it spoke volumes about Brown’s preparedness and drive. Blessed with NFL bloodlines — his father was a longtime NFL starter — Brown had a very nice career at Oklahoma. That said, teams have taken a much closer look at his tape, which shows some glaring flaws including a very poor center of gravity and tendency to lunge at defenders — both of which will be exploited regularly at the NFL level. It’s likely that Brown, once seen as a potential top pick, will slide into the third round, or worse.

There are two sides to this story. Davenport has NFL caliber size (6-foot-6 and 264 pounds) and performed well against NFL caliber talent during the Senior Bowl. He also put up great numbers at the combine, and it’s highly likely he’ll be selected in the first round because of these two factors. At the same time, much like Josh Sweat, this is a player who didn’t perform like you’d expect during his tenure at Texas-San Antonio. You’d expect a player with his athletic capabilities to absolutely dominate in Conference USA play, yet Davenport’s production was very modest — he only tallied 21.5 sacks in 43 career games for the Roadrunners. So, there’s certainly a risk that Davenport will never become a dominant NFL pass rusher.

There are two reasons Guice makes this list. The first is easy to understand, which is that he doesn’t come into the NFL with a clean slate injury-wise. He was banged up a lot last year and struggled on the field because of it. The second reason is a bit more complicated. As Tom Pelissero of NFL Network reported recently, NFL teams are concerned that Guice is immature and could be a high-maintenance player who needs constant supervision. This year’s draft class is absolutely loaded with starting-caliber running backs. So if enough teams are concerned about Guice’s maturity level, he could see a draft-day slide.

Much like we detailed with Sweat and Davenport, Edmunds comes into the draft with a ton of hype because of his physical attributes — he’s been compared to Brian Urlacher — and potential. He’s been a decently productive player at Virginia Tech and has the ability to make splash plays that can alter the outcome of a game. He’s also just a pup who’s not even 20 years of age. The thing is, Edmunds isn’t a terribly instinctive player, and he gets swallowed up at the line of scrimmage by run blockers. Roquan Smith is much more polished, is quicker and much more instinctive. Yet due to Edmunds’ “potential,” he could be the first linebacker selected. This is just one man’s opinion, but to me that’s the wrong move. 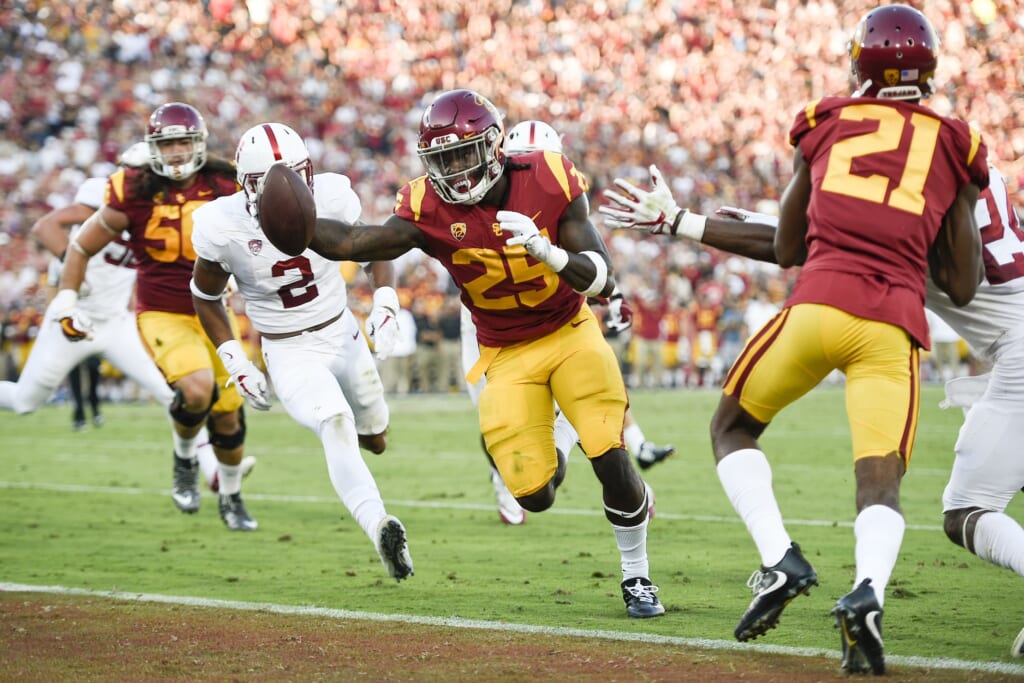 There’s been a lot of buzz that Jones is a Jamaal Charles clone. And if that’s the case, then whichever team that drafts him will get a steal in the second round. That Jones is talented is not up for debate. He has home run speed (here’s a great example), has a knack for getting through traffic at the line of scrimmage and can make some sweet cuts while doing so. That said, Jones isn’t big (just 5-foot-11 and 200 pounds) and isn’t a natural receiver. So, he’s a guy who could end up being pigeonholed as a situational third-down back who isn’t very good at doing what most third-down backs are known for doing.

The big question everyone has about Jackson is whether he’s just starting to ascend or if he was a one-year wonder. The reason for this question is that, prior to 2017, this cornerback was almost invisible his first two years playing for the Hawkeyes after switching from receiver to cornerback. What Jackson did last year was nothing short of remarkable. He emerged as one of the nation’s premier ball hawks and shutdown corners, racking up eight interceptions while breaking up 27 more passes. It’s fair to wonder, however, if Jackson will be able to continue improving or if he’ll take a significant step backward going up against NFL competition.

The ultimate boom-or-bust player in this year’s NFL draft, Allen has physical tools that have NFL scouts in awe. He’s extremely athletic, is big and strong, and has a rocket arm the NFL hasn’t seen since JaMarcus Russell. Allen is also extremely inaccurate and gets fooled by defensive coverage quite easily, often getting absolutely surprised by blitzes he never saw coming. And once he’s on the move Allen’s eyes don’t stay on his receivers like all great passers do. Instead, he tends to lose focus and appears to forget where his players are supposed to be. He’s not ready for the NFL stage whatsoever, yet there is strong buzz that Allen could end up going No. 1 overall to the Cleveland Browns. That would be extremely risky, and the Browns could certainly live to regret that decision.